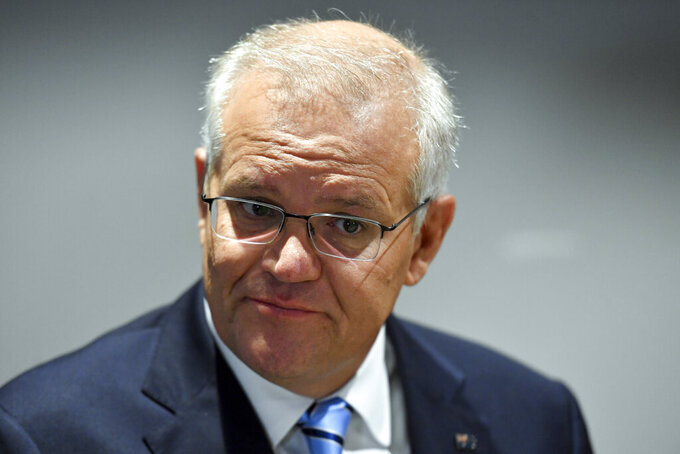 CANBERRA, Australia (AP) — Australian Prime Minister Scott Morrison said Thursday he is following security officials’ advice in managing relations with the Solomon Islands after its leader alleged he had been threatened “with invasion.”

Solomon Islands Prime Minister Manasseh Sogavare told Parliament on Wednesday that opponents of his new security pact with China have threatened his country and insulted it.

Sogavare did not name the opponents. Both the United States and Australia have told the Solomon Islands that a Chinese military presence in the Pacific island nation less than 2,000 kilometers (1,200 miles) from northeastern Australia would not be tolerated.

“We deplore the continual demonstration of lack of trust by the concerned parties, and tacit warning of military intervention in Solomon Islands if their national interest is undermined in Solomon Islands,” Sogavare said.

“In other words, we are threatened with invasion,” Sogavare said.

On the threat of invasion, Morrison said, “Of course, none of that’s true.”

“I can tell you very clearly that I am following very carefully the advice that I get from our security intelligence agencies in how we are responsibly managing the issues in relation to this matter,” Morrison told reporters. “That is exactly what I’m doing.”

Morrison said he had had contact with Sogavare "in the last few months,” but did not specify when.

Opposition leader Anthony Albanese has promised closer engagement between Australia and its South Pacific neighbors if Labor wins elections on May 21.

“The fact that the prime minister hasn’t picked up the phone to Prime Minister Sogavare says an enormous amount ... about what is needed in terms of that relationship,” Albanese said.

“The government has dropped the ball on the Pacific right now,” Albanese added.

Sogavare has maintained that there will be no Chinese base in his country.

“We are being treated as kindergarten students walking around with Colt .45s in our hands, and therefore we need to be supervised. We are insulted,” Sogavare said on Wednesday.

Sogavare condemned the "glaring hypocrisy” of critics of his deal with China. The United States, Australia and Britain secretly negotiated a trilateral partnership announced in September that will allow Australia to obtain nuclear-powered submarines.

“It also proves that the accusations made by the U.S. and Australia against China are purely double standards," Zhao said.

Morrison said Australia needed to be “calm and composed” in dealing with the Solomon Islands.

“Mr. Sogavare has entered into a secret arrangement with the Chinese government, he has done that with a number of his Cabinet ministers,” Morrison said.

“That did not come as a surprise to our government and so now we just work responsibly with our partners to manage that situation to first protect the security interests of Australia but also of the Solomon Islands,” Morrison said.

Labor has condemned the China-Solomon Islands pact as Australia’s biggest foreign policy failure in the Pacific since World War II.

Australia already has a security pact with the Solomon Islands and Australian police peacekeepers have been in the capital, Honiara, since riots in November.