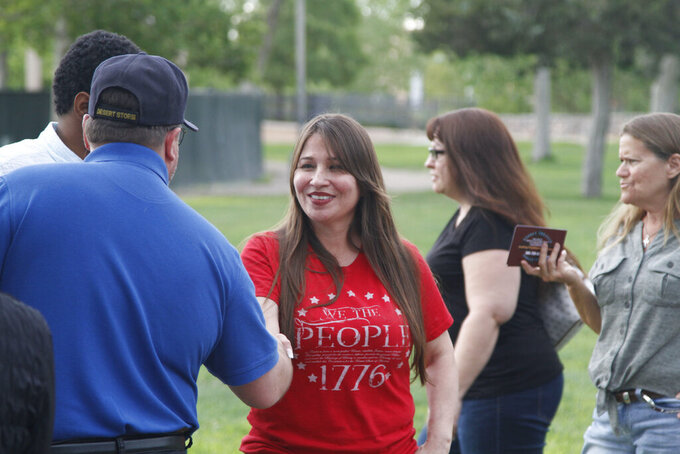 Morgan Lee, ASSOCIATED PRESS
Audrey Trujillo, the Republican nominee for secretary of state in New Mexico, courts voters at a campaign rally in Rio Rancho, N.M., on June 24, 2022. Trujillo on Thursday, Sept. 22, 2022, removed an online campaign flier that offered the chance to receive a firearm in return for campaign donations in apparent violation of state restrictions on raffles. State gambling regulators say the matter was resolved voluntarily. (AP Photo/Morgan Lee)

SANTA FE, N.M. (AP) — New Mexico's Republican nominee for secretary of state has removed an online campaign flier that offered the chance to receive a firearm in return for $100 donations to her campaign.

The gun “giveaway” offer on a Facebook campaign website for candidate Audrey Trujillo appeared to run afoul of a state prohibition on the use of raffles to raise funds for an individual running for office.

Contacted Thursday by The Associated Press, Trujillo said that she was removing the gun giveaway flier out of concern it might be out of compliance. She said her campaign would offer refunds for any possible contributions linked to the gun offer.

Trujillo is challenging incumbent Democratic Secretary of State Maggie Toulouse Oliver in the November general election for the New Mexico's top elections regulation post that also oversees campaign finance and ethics provisions. The small business owner from Corrales is campaigning for large-scale changes to elections as part of the America First Secretary of State Coalition.

Trujillo said she was aware of restrictions on raffles for campaign purposes and had intended simply to give away a gun that was provided to her campaign in honor of the constitutional right to bear arms. She said the notice was posted without her review and that she took it down after seeing the wording.

“I know that for a fact that we're not supposed to do raffles or sell anything — it was being given away,” Trujillo said. “We took it down immediately. We're not doing it because we want to make sure that we comply.”

The campaign flier, with an image of Trujillo, announced an October gun giveaway and that “with each $100 donation, you will be entered for a ticket. Only 200 tickets will be sold ... winner is responsible for background check fee.” A QR code was linked to a campaign contribution processing website.

The gun displayed on the flier was a 12-gauge, semi-automatic shotgun with a magazine for multiple shells.

Trujillo campaign manager Freddie Lopez said the campaign spoke with an official at the state Gaming Control Board to inform the agency that the gun offer had been removed.

“It was a mistake on our part, and we corrected it,” he said.

Gaming Control Board staff representative Richard Kottenstette said the agency is satisfied for now by voluntary compliance after an enforcement agent contacted Trujillo's campaign manager to confirm that the campaign notices were removed, with no apparent campaign contributions received.

“It's been made public before that political campaigns should not be using raffles for fundraising," he said. “It's out there. It's not hard to find.”