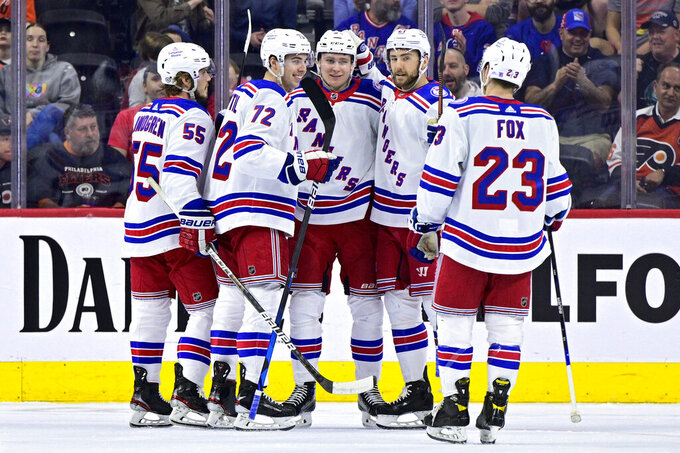 PHILADELPHIA (AP) — Kaapo Kakko scored a pair of goals and Alexandar Georgiev made 28 saves to lead the New York Rangers to a 4-0 victory over the Philadelphia Flyers on Wednesday night.

Artemi Panarin and Andrew Copp also scored for New York, which has won four of five. Barclay Goodrow and Jacob Trouba each had two assists.

The Rangers remained in second place in the Metropolitan Division, two points behind idle Carolina. The Hurricanes skated to a 4-2 win over the Rangers in New York on Tuesday night.

“(Georgiev) was excellent, real strong game,” Rangers coach Gerard Gallant said. “He was the difference for us.”

Georgiev was strong early to prevent Philadelphia from taking a lead — until the Rangers got their legs going. His best save might have been a stop on Travis Konecny’s backhanded breakaway attempt with 2:48 left in the second. Georgiev recorded his eighth career shutout.

“It feels great,” Georgiev said. “You need a little bit of luck and the team to play great in front of you. That was all there today.”

The Flyers have been outscored 18-5 while losing three in a row. Philadelphia entered 15th of 16 teams in the Eastern Conference and was playing without several key regulars.

Kakko scored his first with 9:40 left in the first when his wrist shot from the slot beat Felix Sandström on the glove side. It was Kakko’s sixth goal of the season and first since Dec. 15.

“It feels good,” he said. “Our line played well and our whole team played well.”

He made it 2-0 with 11:38 left in the second when Filip Chytil won a battle along the boards and then passed to the front of the net to Kakko, who one-timed it past Sandstrom.

Kakko was playing in his third game back after a 2½-month absence due to an upper body injury.

“He drove the net,” Gallant said. “The line played the way they’re supposed to play, our most consistent line.”

The Rangers went in front 3-0 with 8:57 remaining in the second when Panarin notched his 22nd of the season on a one-timer from the side of the net after a superb pass from the blue line from Trouba.

The Rangers improved to 24-15 on the road. They have seven games left to try to catch Carolina, including an April 26 matchup against the Hurricanes in New York.

Philadelphia is playing out a forgettable season. The Flyers’ lineup is littered with AHL call-ups and recent draft picks.

“There were a few lapses in there, but I don’t think the issue was effort,” Flyers interim coach Mike Yeo said.

With both teams playing the second night of a back-to-back, that youthful energy helped the Flyers get off to a strong start with seven of the first eight shots. But the Rangers took control on Kakko’s first tally and never let up, much to the delight of the many Rangers fans in attendance who seemed to be more vocal than the Flyers fans.

Philadelphia dropped to 13-25 at home.

Chris Kreider, who became the fourth Rangers player to reach 50 goals with a tally on Tuesday, was held scoreless.

Flyers: At Buffalo on Saturday.