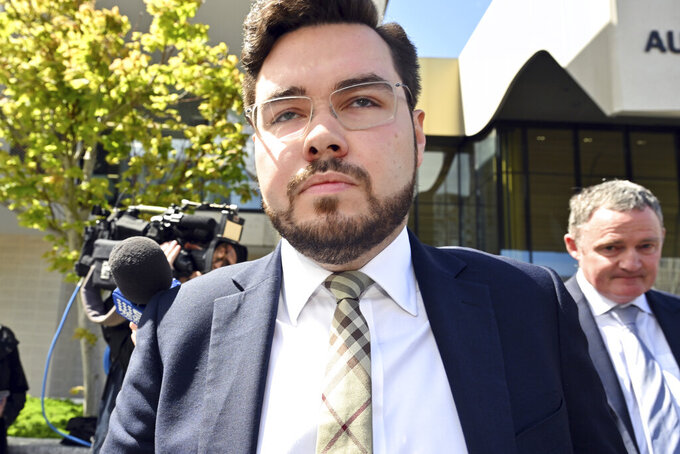 Mick Tsikas, ASSOCIATED PRESS
Former Liberal Party staffer Bruce Lehrmann leaves the ACT Supreme Court in Canberra, on Oct. 27, 2022. An Australian prosecutor says he dropped a rape charge against Lehrmann, a former government adviser, Friday, Dec. 2, 2022, because of the life-threatening trauma a trial would cause the woman allegedly assaulted in a Parliament House office. (Mick Tsikas/AAP Image via AP)

CANBERRA, Australia (AP) — An Australian prosecutor on Friday dropped the rape charge of a woman who was allegedly assaulted in a parliamentary office after he determined that the stress of the trial would put her life at risk.

Former government staffer Brittany Higgins alleges a more senior colleague, Bruce Lehrmann, raped her in a minister’s office after a night of heavy drinking in March 2019.

The Associated Press does not usually identify alleged victims of sexual assault, but Higgins has chosen to identify herself in the media.

Higgins was in a hospital receiving mental health treatment after the past “difficult and unrelenting” two years, her friend Emma Webster said in a media statement.

Director of Public Prosecutions Shane Drumgold said he dropped the case based on medical evidence that a trial could cost Higgins’ life.

“I’ve recently received compelling evidence from two independent medical experts that the ongoing trauma associated with this prosecution presents a significant and unacceptable risk to the life of the complainant,” Drumgold told reporters.

Drumgold said there was a “reasonable prospect” that a trial would end in a conviction.

“In light of the compelling independent medical opinion and balancing all factors, I’ve made the difficult decision that it is no longer in the public interest to pursue a prosecution at the risk of a complainant’s life,” he said.

Webster said, “While it’s disappointing the trial has ended this way, Brittany’s health and safety must always come first.”

Lehrmann, 27, had pleaded not guilty to a charge of sexual intercourse without consent and his trial in the Australian Capital Territory Supreme Court ended without a verdict in October.

A judge discharged the jury while they were deliberating their verdict after a juror was found to be researching academic publications on sexual assault, which amounted to juror misbehavior. The jury was supposed to reach its verdict solely on the evidence presented during the 12-day trial.

Lehrmann was to be retried in February 2023. He faced a potential 12-year prison sentence if convicted.

Complainants in sexual assault cases in the Australian Capital Territory are entitled to testify remotely via video rather than face their alleged assailants in court, but Higgins chose to attend court in person to testify.

Lehrmann did not give evidence, but claimed through his lawyers that he had no sexual contact with Higgins.

A book deal Higgins had signed was offered as motivation for her to lie about being raped.

After the mistrial in October, Higgins gave a press conference in which she attacked the justice system.

“Today’s outcome does not change that truth. But I did speak up, I never fully understood how asymmetrical (the) criminal justice system (is), but I do now,” she added.

She recounted how she was questioned for days in the witness box and forced to surrender her telephones, messages, photos and data to Lehrmann’s lawyers. Lehrmann exercised his right not to give evidence.

“My life has been publicly scrutinized, open for the world to see. His was not,” Higgins said.

Drumgold on Friday praised her bravery.

“During the investigation and trial, as a sexual assault complainant Ms. Higgins has faced a level of personal attack that I’ve not seen in over 20 years of doing this work,” Drumgold said.

“She’s done so with bravery, grace and dignity and it is my hope that this will now stop and Ms. Higgins will be allowed to heal,” he added.

Webster said her friend was “in hospital getting the treatment and support she needs.”

“The last couple of years have been difficult and unrelenting,” the statement said. “Brittany is extremely grateful for all the support she has received, particularly from our mental health care workers."

Higgins has become a household name in Australia since she went to the media last year with her accusations that the former government had treated her rape allegation, when she was 24, as a political problem and failed to adequately support her.

The case sparked nationwide protests as an example of a toxic work culture in Australian politics that is criticized as hostile toward women.

She quit her government job in January 2021 and then made a statement to police about the then-two-year-old alleged rape.

Then-Prime Minister Scott Morrison responded in February 2021 by apologizing to Higgins in Parliament for the “terrible things” that she had endured in the building.