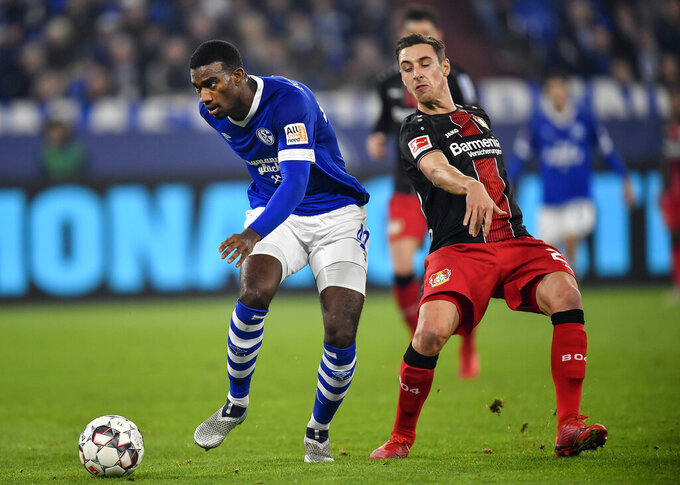 Martin Meissner, ASSOCIATED PRESS
FILE - Schalke's Haji Wright, left, and Bayer Leverkusen's Dominik Kohr challenge for the ball during the German Bundesliga soccer match in Gelsenkirchen, Germany, Dec. 19, 2018. Wright, a 24-year-old forward from Los Angeles who is on a scoring run in the Turkish league, also is among the players who could make their United States debuts along with Borussia Mönchengladbach outside back Joe Scally, who was on the roster for November World Cup qualifiers but did not get in a match. (AP Photo/Martin Meissner, File)

Malik Tillman, Haji Wright, Cameron Carter-Vickers and Djordje Mihailovic are joining the U.S. national team for four World Cup prep matches next month, signalling open spots remain on what is expected to be a 26-man roster in November.

“Around the edges, there is room," U.S. coach Gregg Berhalter said Friday after announcing his 27-man roster for a pair of exhibitions and two CONCACAF Nations League matches. ”And if a guy's in form and doing a great job. I can expect him to to make a case to be on the roster."

Tillman, a 19-year-old Bayern Munich midfielder, is switching affiliation from Germany. He was born in Germany to a father in the U.S military and a German mother. He played for the U.S. under-15 team in 2016 and for Germany at several youth levels.

Tillman made his Bundesliga debut with Bayern Munich on Dec. 14 and has played in four league, two Champions League and one German Cup matches this season. The U.S. Soccer Federation said he had applied to FIFA for a change of affiliation.

“It was just about painting the vision of our program and where we could potentially see him fitting in,” Berhalter said. ”Really talented between the lines ... knack for scoring goals, good calm around the penalty box, good technique scoring, both footed, so interesting player."

Wright, a 24-year-old forward from Los Angeles who is on a scoring run in the Turkish league, is also among the players who could make their U.S. debuts. So could Borussia Mönchengladbach outside back Joe Scally, who was on the roster for November World Cup qualifiers but did not get in a match.

Wright played for the U.S. at the 2015 Under-17 World Cup alongside Christian Pulisic and Tyler Adams and attended a national team training camp in May 2019 that included young players. He scored 14 goals in 32 league matches for Antalyaspor and had a seven-game scoring streak that ended in Friday’s season finale.

The U.S. has exhibitions against Morocco on June 1 in Cincinnati and against Uruguay four days later in Kansas City, Kansas. Then, the team will play CONCACAF Nations League matches against Grenada on June 10 in Austin, Texas, and at El Salvador four days later.

The Americans plan a pair of friendlies in Europe in September, then will open the World Cup in Qatar on Nov. 21 against Wales, Scotland or Ukraine. They play England four days later and close group play against Iran on Nov. 29.

Carter-Vickers, 24, helped Glasgow Celtic win the Scottish Premier League in his first season with the club, scoring four goals in 33 league appearances. A son of former NBA player Howard Carter, he has made eight international appearances since 2017, all in exhibitions and none since June 2019 against Jamaica.

Juventus midfielder Weston McKennie was called in and could play for the first time since breaking broke a bone in his left foot on Feb. 22.

“Hopefully we can get to a point where he can start one of the Nations League games,” Berhalter said.

Dortmund midfielder Gio Reyna (reoccurrence of leg injury on April 28), Atlanta defender Miles Robinson (torn left ACL on May 7), Barcelona outside back Sergiño Dest (right hamstring on April 24) and Young Boys striker Jordan Pefok (hasn't played since May 7) and Norwich forward Josh Sargent (ankle on April 30) and will miss the games due to injuries.

Berhalter intends to experiment with a three-man back line.

Wolfsburg defender John Brooks and Ausgburg forward Ricardo Pepi were among the notable omissions. Brooks, a 29-year-old defender who was on the 2014 World Cup roster, has not been picked by Berhalter since qualifiers last September and plans to switch clubs ahead of next season.

Pepi has been playing constantly for 15 months and has not scored in 24 matches for club and country since October.

Midfielders Gianclua Busio of Venezia and James Sands of Glasgow Rangers also were given time off for rest following transfers from to European clubs.

“This camp isn’t determine who’s on the team,” Berhalter said. “We’re going to have much harder conversations after September and that’s where it’s going to get a lot more difficult, I think, for everybody.”