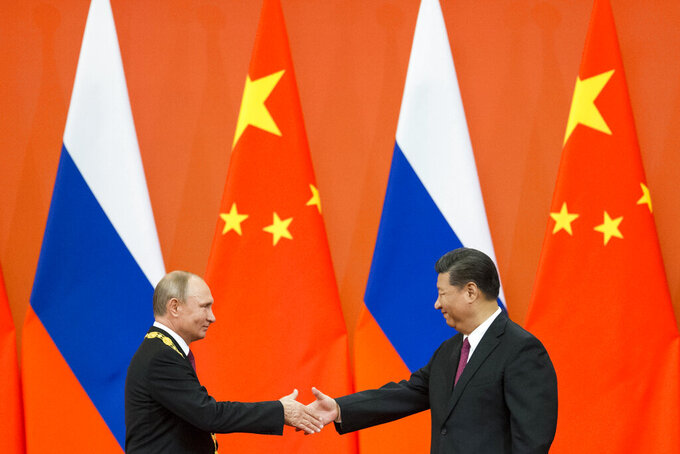 Alexander Zemlianichenko, ASSOCIATED PRESS
FILE - Chinese President Xi Jinping, right, and Russian President Vladimir Putin shake hands during an awarding ceremony at the Great Hall of the People in Beijing, China, on June 8, 2018. Xi is keeping the West guessing about whether Beijing will cooperate with tougher sanctions on Russia as he meets President Vladimir Putin a year after declaring they had a “no limits” friendship ahead of the Kremlin’s invasion of Ukraine. (AP Photo/Alexander Zemlianichenko, Pool, File)

BEIJING (AP) — Chinese leader Xi Jinping is keeping the West guessing about whether Beijing will cooperate with tougher sanctions on Russia as he meets President Vladimir Putin a year after declaring they had a “no limits” friendship ahead of the Kremlin’s invasion of Ukraine.

China has avoided violating sanctions but its purchases of Russian oil and gas rose almost 60% in August over a year ago to $11.2 billion. That helps to top up Moscow's cash flow after the United States, Europe and Japan cut purchases and expelled Russia from the global banking system.

Xi and Putin are due to meet this week in Uzbekistan at a meeting of the Shanghai Cooperation Organization, an eight-nation Central Asian security group.

Washington and allies in the Group of Seven major economies want to squeeze Moscow by enforcing an upper limit on how much buyers are allowed to pay for its oil. That would require cooperation from China, India and other energy-hungry Asian economies that have avoided taking sides and still buy from Russia.

“India and China may decide to stay out of the fray and sign separate agreements with Russia,” wrote Sergey Vakulenko, a former strategy director for Russian gas giant Gazprom, in a report for the Carnegie Endowment for International Peace.

China’s potential role as a spoiler reflects its strength as the second-biggest global economy and its reluctance to hurt Russia.

Beijing-Moscow relations were chilly during the Soviet era but the two sides have formed a political marriage of convenience since the 1990s, united by shared frustration with U.S. dominance of global affairs.

Russia is looking to China for support, said Alexander Gabuev, a leading Russian expert on ties with Beijing.

China is the largest trade and economic partner outside the sanctions coalition, he noted, contributing about 18% to Russia's foreign trade. As Russia embraces using the Chinese yuan as its main foreign currency and looks to China to replace some technology it cannot buy from the West, it will rise further.

“China will be a much larger partner of Russia by the end of this year, and especially in the coming years, when the oil embargo will fully work and gas exports to the EU will drop, possibly to zero, except for what gets through the Turkish stream,” Gabuev said.

Beijing bought 20% of Moscow's crude exports last year, according to the International Energy Agency. Purchases have risen this year, helping to top up Russia's cash flow in the face of Western sanctions. China spent 60% more on Russian oil and gas in August than a year earlier, according to customs data.

The ruling Communist Party's military wing, the People's Liberation Army, spent billions of dollars on Russian fighter planes and other weapons starting in the late '90s, but those purchases have ended as China develops its own technology.

G7 governments announced on Sept. 2 they would enforce price caps on Russian oil by prohibiting their shipping companies or insurers from dealing with any customer that pays more. They have yet to say when that might take effect.

Other sanctions imposed by Washington, Europe and Japan are enforced by the threat that any country that violates them, even if it has not agreed to them, might also be cut off from valuable Western markets and the global banking system.

China, the biggest global energy consumer, has one of the biggest tanker fleets and its own insurers, which would allow Beijing to operate outside G7 curbs.

If China, India or other Asian governments refuse to cooperate, the G7 has to decide whether to sanction their biggest trading partners and “risk waging an economic war on several fronts,” Vakulenko wrote.

Meanwhile, Russia has threatened to stop selling to any country that complies.

China rejects sanctions already in place as improper because they weren't imposed through the United Nations, where Beijing and Moscow have veto power as permanent Security Council members. But Chinese banks and companies have complied for fear of losing access to valuable Western markets or the global financial system.

Some Chinese companies are pulling out of Russia, but Beijing appears to be looking for ways to profit from Moscow's isolation.

Access to low-priced Russian oil and gas has helped China ward off the inflation that is roiling Western economies.

While inflation in the 17 countries that use Europe’s euro currency spiked to a record 9.1%, Chinese consumer prices rose just 2.5% in August, down from the previous month’s 2.7%.

Apart from imports that show up in official data, China also might be buying Russian oil, along with crude from Iran and Venezuela, through traders in the Middle East.

Merchants in Fujairah, a port in the United Arab Emirates, blend cargos from suppliers that are under sanctions and shift them between tankers at sea to hide their origin, The Wall Street Journal reported Aug. 29, citing unidentified traders.

Elsewhere, exports to China from Malaysia, an oil producer, exceed the Southeast Asian nation’s domestic output by one-third, according to Bloomberg News, suggesting it is being used as a channel for other supplies.

On Feb. 4, three weeks ahead of Moscow's attack on Ukraine, Beijing and Moscow announced a 30-year gas contract. The official newspaper Global Times said that will increase Russia's annual supplies to China by about 25%.