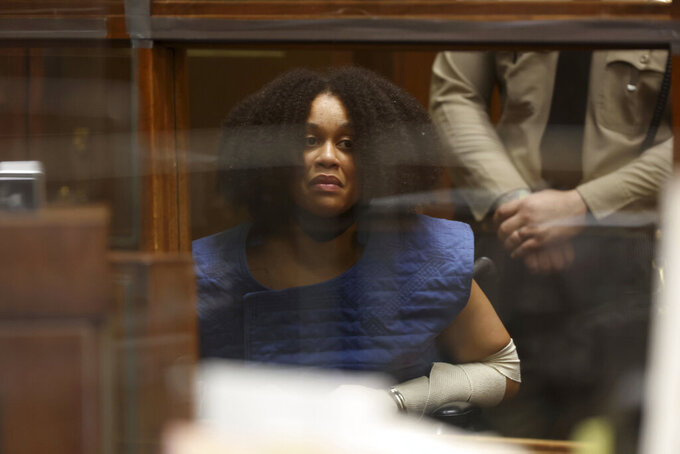 Frederick M. Brown, ASSOCIATED PRESS
Nicole Linton appears in Los Angeles Superior Court for arraignment on murder charges stemming from a traffic accident, Monday, Aug. 8, 2022, in Los Angeles. Linton, suspected of causing a fiery crash that killed five people and an 8 1/2-month-old fetus near Los Angeles, has been charged with murder, as well as vehicular manslaughter, and is being held on $9 million bail. (Frederick M. Brown/Daily Mail.com via AP, Pool)

LOS ANGELES (AP) — The driver suspected of causing a fiery crash that killed five people, including a pregnant woman, near Los Angeles was suffering from worsening mental health problems and had been involuntarily committed for psychiatric treatment, prosecutors said Monday while seeking to deny her pretrial release.

Nicole Lorraine Linton was charged last week with six counts of murder and five counts of vehicular manslaughter with gross negligence in connection with the Aug. 4 crash. One murder charge was filed for the pregnant woman’s unborn child.

In a filing opposing Linton's release on bail, Los Angeles County Deputy District Attorney Brittany Vannoy said some of her mental health issues were shared with prosecutors by defense lawyers.

“The defense has disclosed a number of prior incidents which appear to be increasing in severity, ranging from the defendant jumping on police cars to jumping out of apartment windows,” Vannoy wrote in documents obtained by the Los Angeles Times. “The defense indicates (Linton) has been subject to involuntary commitments on several occasions and has hurt herself more than once.”

Vannoy argued that Linton’s “extremely reckless conduct combined with her mental health struggles" mean she should be held without bail.

The Times said the filing did not mention any previous car crashes linked to Linton, which prosecutors were said to be reviewing when they filed charges in the Aug. 4 incident.

Attorneys for Linton could not immediately be reached for comment on Linton’s mental health history but earlier Monday denied that she has an extensive history of auto accidents.

“It’s been reported extensively and it’s not true,” Halim Dhanidina, who represents Linton, told the Times.

Linton was scheduled for a bail hearing Monday, but her attorneys asked a judge to postpone it for two weeks.

The 37-year-old traveling nurse from Houston, Texas could face 90 years to life in prison if convicted of all charges.

Prosecutors said Linton’s Mercedes-Benz was doing 90 mph (144 kph) when it ran a red light and smashed into cars in a crowded intersection in unincorporated Windsor Hills about 10 miles (16 km) southwest of downtown LA. Victims were thrown from the cars and several vehicles caught fire.