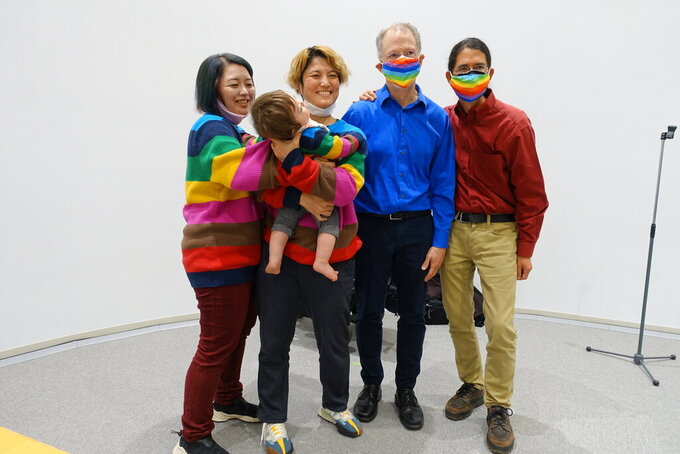 Mari Yamaguchi, ASSOCIATED PRESS
Same-sex couples from left; partners Satoko Nagamura and Mamiko Moda and their son Ittan, and John Lewis and Stuart Gaffney pose for photos after the press conference marking the first day of Tokyo’s recognition for partnerships, Tuesday, Nov. 1, 2022, in Tokyo, Japan. The Tokyo Metropolitan Government on Tuesday began issuing certificates recognizing same-sex couples in the Japanese capital, a small improvement toward greater awareness of sexual diversity in a country where same-sex marriage is not allowed. (AP Photo/Mari Yamaguchi)

TOKYO (AP) — Japan's capital, Tokyo, began issuing certificates recognizing same-sex couples on Tuesday, becoming the largest municipality to do so in a country in which same-sex marriage is not allowed.

The certificates are not legally binding but allow same-sex partners to apply for public housing like married couples, give them access to medical data and allow them to be beneficiaries in auto and life insurance.

Support for sexual diversity has grown slowly in Japan, and legal protections are still lacking for lesbian, gay, bisexual and transgender people. They often face discrimination at school, work and at home, causing many to hide their sexual identities.

Still, many sexual minority couples say the partnership recognition will improve their daily lives, allowing them to rent apartments and sign documents in medical emergencies, and in inheritance.

“With this (certificate), there is no need to explain, and I think I will be able to talk to other people about the relationship between myself and my partner with a bit more confidence,” said Soyoka Yamamoto, who campaigned for same-sex partnership recognition by Tokyo.

She said she has worried constantly about discrimination and had to make an extra effort in explaining her relationship with her partner. A certificate recognizing their partnership was issued Tuesday with Gov. Yuriko Koike's signature.

Her partner, Yoriko, who uses only her first name, also welcomed the certificate, saying it “publicly recognizes our relationship for the first time after we have lived together for more than 10 years.”

Same-sex couples are often barred from jointly renting apartments, visiting each other in the hospital and other services available to married couples. When Yoriko called an ambulance after her partner had a medical emergency at home, she was told to obtain consent from Yamamoto's parents, the couple said.

“Our goal is to use the certificate as a springboard for achieving a society where the rights of sexual minorities are protected,” Yamamoto said at a news conference sponsored by Partnership Act for Tokyo, a group she leads.

Fumino Sugiyama, a transgender activist, said the certificates recognize the presence of sexual minorities and the need to recognize their rights.

“Until now, all the systems, rules and services in Japan have been formed as if LGBTQ+ people are invisible in this society, and Tokyo's system has been the same,” Sugiyama said. He called the partnership certificate “a big step,” but added, “This is not the goal, but rather the beginning."

The Tokyo metropolitan government said it received 137 applications as of last Friday. Applicants are limited to adult residents of the capital, including foreign nationals.

Satoko Nagamura and Mamiko Moda, a same-sex couple, are raising their 11-year-old son Ittan, who was given birth by Nagamura by sperm donation.

Moda said the certificate only recognizes partnerships between adults and needs to cover children of same-sex couples. “From a child’s perspective, it’s like you are abandoned. When the child asks, ‘What is this family?’ then I also want to have proof as a parent.”