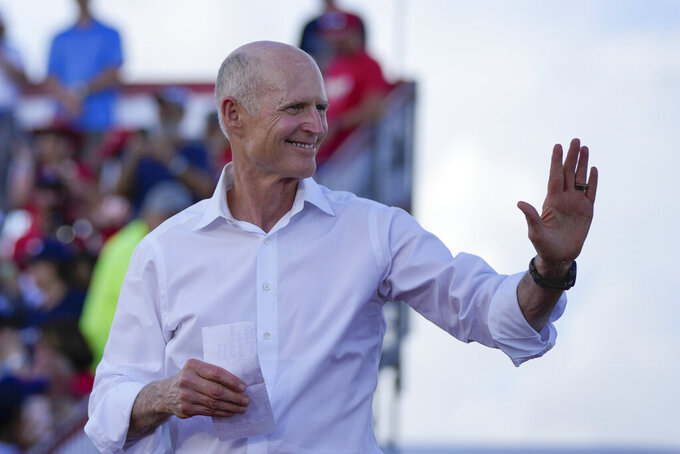 Rebecca Blackwell, ASSOCIATED PRESS
FILE - Sen. Rick Scott, R-Fla., arrives to speak before former President Donald Trump at a campaign rally in support of the campaign of Sen. Marco Rubio, R-Fla., at the Miami-Dade County Fair and Exposition on Nov. 6, 2022, in Miami. Scott is mounting a long-shot bid to unseat Senate Republican leader Mitch McConnell, a rare challenge for the longtime GOP stalwart after his party failed to win back the majority in the midterm elections. (AP Photo/Rebecca Blackwell, File)

WASHINGTON (AP) — Florida Sen. Rick Scott said Tuesday that he will mount a long-shot bid to unseat Senate Republican leader Mitch McConnell, opening the latest front in an intraparty battle between allies of McConnell and former President Donald Trump over the direction of the GOP following a disappointing showing in last week's midterm elections.

The announcement by Scott, who was urged to challenge McConnell by Trump, came hours before the former president was expected to launch a comeback bid for the White House. It escalated a long-simmering feud between Scott, who led the Senate Republican's campaign arm this year, and McConnell over the party's approach to reclaiming a Senate majority.

"If you simply want to stick with the status quo, don’t vote for me," Scott said in a letter to Senate Republicans offering himself as a protest vote against McConnell in leadership elections on Wednesday.

Restive conservatives in the chamber have lashed out at McConnell's handling of the election, as well as his iron grip over the Senate Republican caucus. The leadership vote was scheduled for Wednesday morning, though it could be postponed if Texas Sen. Ted Cruz succeeds with his effort to delay it until after a Georgia runoff election in December.

A delay could give leverage to Trump-aligned conservatives who are hoping their clout will grow after the outcome of races in Georgia, where former NFL star Herschel Walker is challenging Democratic Sen. Raphael Warnock, and Alaska, where moderate Republican Sen. Lisa Murkowski faces a conservative challenger.

Yet it appears unlikely that their numbers could grow enough to put McConnell's job in jeopardy, given his deep support within the conference. And Trump's opposition is hardly new, as has been pushing for the party to dump McConnell ever since the Senate leader gave a scathing speech blaming the former president for the Jan. 6 insurrection at the U.S. Capitol.

Still, it represents an unusual direct challenge to the authority of McConnell, who is set to become the longest-serving Senate leader in history if he wins another leadership term.

“We may or may not be voting tomorrow, but I think the outcome is pretty clear," McConnell told reporters Tuesday. “I want to repeat again: I have the votes; I will be elected. The only issue is whether we do it sooner or later.”

Scott was one in a small group of senators who wrote a letter to the Republican caucus over the weekend asking for a delay in this week's leadership elections “to have serious discussions within our conference as to why and what we can do to improve our chances in 2024.”

Republican senators debated the path forward during their regular party lunch on Tuesday. Inside the room, roughly 20 senators spoke. Scott and McConnell traded what colleagues said were “candid” and “lively” barbs, sparring over the midterms, the quality of the GOP candidates who ran and their differences over fundraising. Senators made their individual cases for the two men.

Some members directly challenged Scott in McConnell’s defense, including Maine Sen. Susan Collins, who questioned the Florida senator’s management of the NRSC, according to a person familiar with the meeting.

Scott “disagrees with the approach that Mitch has taken in this election, and for the last couple of years he made that clear,” said Sen. Josh Hawley of Missouri, who has called for a delay and to oust McConnell. “Senator McConnell criticized Senator Scott’s management of the NRSC. I imagine we’ll hear more of that tomorrow.”

Among the many reasons Scott listed for mounting a challenge is that Republicans had compromised too much with Democrats in the last Congress — producing bills that President Joe Biden has counted as successes and that Democrats ran on in the 2022 election.

“I believe it’s time for the Senate Republican Conference to be far more bold and resolute than we have been in the past,” Scott said in the letter, sent to colleagues as the GOP meeting was still going on. “We must start saying what we are for, not just what we are against.”

But as the leader of the National Republican Senatorial Committee following a disappointing election, Scott is also an imperfect vessel to achieve the aims of frustrated Republicans and Trump.

“If you’re going to make this about assessing blame for losing an election, I don’t know how the NRSC chairman gets off the hook,” said North Dakota Sen. Kevin Cramer. "I think that would be the obvious problem he would have.”

The feud between Scott and McConnell has been percolating for months and reached a boil as election results trickled in showing there would be no Republican Senate wave, as Scott predicted, according to senior Republican strategists. They and others interviewed about the feud were not authorized to discuss internal issues by name and insisted on anonymity.

Operatives for the two men have traded barbs for more than a year over the handling of Senate Republican political strategy — or, in the view of some, the lack thereof.

The feuding started not long after Scott took over the party committee in late 2020, which many in the party viewed as an effort to build his national political profile and donor network ahead of a potential presidential bid in 2024. Some were irked by promotional materials from the committee that were heavy on Scott’s own biography, while focusing less on the candidates who are up for election.

Then came Scott’s release of an 11-point plan early this year, which called for a modest tax increase for many of the lowest-paid Americans, while opening the door for cutting Social Security and Medicare, which McConnell swiftly repudiated even as he declined to offer an agenda of his own.

Staffers from Scott’s Senate committee moved into triage mode almost immediately, reaching out to Republican campaigns across the country to gauge their frustration while offering messaging help, according to senior Republican strategists with direct knowledge of the situation who viewed it as an “unforced error.”

“A strategic disagreement" is how Scott has characterized their divergent views.

In August, McConnell undercut Scott during a Senate GOP lunch. Shortly after Scott had made a request for committee donations from Republican senators, McConnell addressed the room and told the Senators to instead prioritize giving to Senate Leadership Fund, a super PAC controlled by longtime McConnell allies, according to two people familiar with the discussion.

Last week, McConnell's super PAC cut Scott out of their efforts to boost turnout in the Georgia runoff, with the super PAC teaming up with Georgia Gov. Brian Kemp’s political operation instead.

The decision was driven in part by the fraying trust in Scott’s leadership, as well as poor finances of the committee, which was $20 million in debt, according to a senior Republican consultant.

For some Senate Republicans, however, the feud is irrelevant to their decision to support Scott.

“We got to have a plan for the American public and if we don't we can expect much more of the same,” said Indiana Sen. Mike Braun, who is supporting Scott's challenge of McConnell.