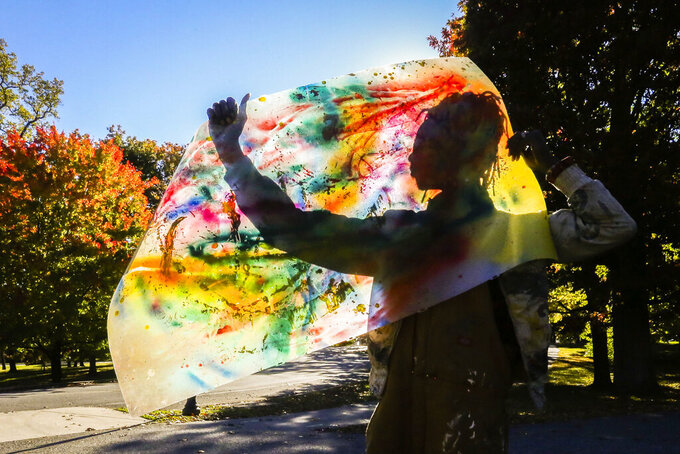 Kaitlin Newman, ASSOCIATED PRESS
Colin Williams poses for a photo on Oct. 25, 2022 in Baltimore. Williams lives in Druid Hill Park and creates a sculpture garden out of a variety of tossed objects he finds such as TVs, glass, wood, mannequins and fabric. (Kaitlin Newman/The Baltimore Banner via AP)

BALTIMORE (AP) — You’ve likely seen his colorful sculpture garden as you enter Druid Hill Park on Swann Drive going toward the Rawlings Conservatory. On the strip of grass next to four brick pillars with lime green moss on their bases, the sculpture garden features anything Colin Williams is in the mood to create: shards of broken glass or old bicycle chains painted with deep oranges and blues in a frame, or a spray-painted bench with a tie-dye-like curtain.

People might dismiss the space as a collection of junk, but Williams is creating a curated corner in the park. He calls himself the “unofficial, official artist-in-residence at Druid Hill Park.”

He lives in the park by his art and is technically homeless, but he doesn’t see it that way. The abstract artist said he is living a “fairy tale” surrounded by his creations, scavenged supplies piled in corners or stacked in shopping carts, and a large tent shrouded by a blue tarp.

Williams chose to make the park his home over a year ago when his youngest sister lived close by. She offered to let him stay with her after he quit his job and had no place to live, but he knew he couldn’t create his art there. He asked her to take him to the park after doing a Google search on “state of Maryland, city of Baltimore, art in the park.” Before then, he lived in a wooden shelter he built or slept in a car in Middle River near his other younger sister’s home. He didn’t want to live in her house as an adult without a job.

When he moved into the park, he didn’t have much. But he had what he needed: a simple life and freedom.

Jacqueline Williams, his youngest sister, said she thinks her brother’s move was sparked by being fed up and tired of working unfulfilling jobs that did not stimulate his creativity and feeling he had for too long put the needs of others before his own.

That desire for autonomy became most clear in 2020. Williams said he slammed on the brakes as he drove up a dark highway between Maryland and New Jersey in a Krispy Kreme truck. He thought he saw a woman on the road, but had actually fallen asleep at the wheel while traveling at least 70 miles per hour.

His job as a delivery driver allowed him to pay his bills, but he was deeply unhappy. One day in particular, he said, was a cycle of torment: delivering doughnuts, crying in the car, praying and driving.

“If I didn’t put myself first, I would always fall last,” Williams said.

He was scared the first few nights in the park. Not only was it incredibly dark, but he worried about intruders or getting thrown out by park officials. (So far, he’s only had to fend off raccoons and rats.)

It was weeks before he showcased his artwork because he was trying not to take up too much space in the 745-acre park. Park rules say that any use “after dusk is prohibited due to safety reasons.”

So far, park officials have left him alone, aside from a conversation about where he can lay out his art and other belongings. Baltimore City Recreation and Parks said in a statement that they’re working with the mayor’s office to help those experiencing homelessness within the city’s public parks. Someone from the mayor’s office talked to Williams about going to a shelter, but he prefers the park where he can come and go, keep his own cabinet of food and sleep beneath the stars.

Williams’ art pieces include spray-painted creations and abstract sculptures using anything he can get his hands on: styrofoam figurines or mannequins, shopping carts, a chandelier, frames, legs to metal or wooden tables and different shapes of glass. He finds his supplies among discarded items in alleyways or dumpsters when he walks around the city. He loves using stencils and enjoys repurposing items people throw away.

Recently, wearing an army green jumpsuit with paint stains and a red and blue NASA patch on the left sleeve, Williams, 35, held up television screens and refrigerator shelves he had recently spray painted. His dark brown locks with honey-colored tips dangled across his face as he looked down at the swirls and splatters of glitter with red, gold and pink paints.

The pieces of art in his “sculpture garden” are always changing.

“If it stays the same, people won’t see it anymore,” Williams said.

Williams has bonded with people at the park who exchange living necessities for his work, and look out for him. He has received a chiminea, ceiling tiles, spray paint, toiletries, clothing, tents, fruit and other food. He’s hesitant to ask for anything, he said, but he’s grateful to receive.

Craig Phillips, a craftsman and frequent visitor of the park, has at least 10 pieces of Williams’ art. A favorite is a piece he commissioned: a light brown wooden square bordered with stenciled swirls and small petal-shaped accents. In the center, a lotus shape colored in shades of pink surrounds the sacred Hindu symbol “om,” painted ocean blue.

William Minor, who would eat lunch in the park, noticed Colin Williams in the parking lot, sitting in a big papasan chair. The art looked like junk and Minor at first thought the man in the park was “crazy.” Then the men got better acquainted and Minor realized the creations were something that “can’t be taught in art school.”

“People can say what they want about Baltimore, but Baltimore has taken care of Colin,” Minor said.

Janice McKoy of Mount Washington is one of those caretakers. She thinks Williams is an artistic genius. One of the first times they met, she said, they talked for hours and she felt like she had known him her entire life. She brings him food and supplies and wonders how anyone could pass the sculpture garden and not see it belongs in an art gallery.

“I’m just amazed and blown away every time I see him,” McKoy said.

Williams has a hard time figuring out where his inspiration comes from.

One permanent installation in the sculpture garden is dedicated to his mother. In the installation, two large pine branches hang from each side of a tilted pool ladder. A lion-shaped backpack spray-painted gold (his mother’s Zodiac sign was Leo) sits on an elevated chair with a plaid cushion. Sitting front and center is a golden head and torso of a mannequin with a blue and red swirl on the chest and a rectangular sheet of glass painted black, red and light blue. A distinct blotch of black paint looks like an inkblot card. Williams likens the figure to a mother connected to a child.

In March of 1998, when Williams was 11, his mother Lori Sue Wilson and her grandparents, Leana Ferrell and William Ferrell, were brutally attacked by her oldest son after a dispute over money, according to a Baltimore Sun article. Williams’ great-grandparents died in the weeks following the attack. His mother was hospitalized and suffered brain and cosmetic damage. Damon Wilson, Williams’ half brother, was sentenced to 90 years in prison, according to Department of Public Safety and Correctional Services records.

Williams, who says he’s a “mama’s boy,” said his mother was unrecognizable after the attack, her face swollen and smashed. Her head was shaved for surgery, and gone was the patch of hair above her ear where Williams loved to press his nose. The mom, who loved to cook, taught him ceramics and bought him colored pencils, markers and paper, needed daily assistance for the rest of her life.

“It always bothered me because I could not remember my mother’s face before her scars,” Williams said.

His mother moved to Pittsburgh with her uncle after the attack and Williams’ father received full custody of him and his two younger sisters. Unlike his free-spirited mother, his father was more stern. Williams felt uneasy around his father, who wanted his son to be more like him, stifling the creative seeds his mother had planted.

His father taught him how to fix cars, to care for lawns, and woodwork. At Woodlawn High School, he participated in theater and wanted to pursue acting.

Williams wouldn’t become an actor. Instead, he became his mother’s full-time caregiver in his early 20s.

“He had to put himself to the side for a long time,” said his younger sister, Jocelyn Williams, who lives in Middle River and tries to visit her brother often. It’s comforting to know that people watch out for him, she said.

Williams once worked three jobs, but couldn’t always make ends meet. His gas and electric service would get turned off and he would get evicted and move around. After his mother fell and got a concussion, she moved into a nursing home and died in 2016.

Williams said he slowly started to spiral after his mother’s death. At one job, he’d make idle threats to no one under his breath. At another, he’d wish to get in an accident so he could take time off and rest. Certain thoughts about his mother still make him sad, like thinking about the last time he held her hand or not knowing where her urn is because he couldn’t pay for the storage unit it was housed.

“I don’t think we as people ever recover from the loss of someone that we love,” Williams said.

Williams’ latest installation features thrones and sculptures that incorporate chairs. The “throne of good wood” features two large, lopsided wooden spools. Crooked branches shaped like lightning strikes extend from each side and a single wooden chair towers over it all. He started the installation because he had a lot of chairs, but he said his love for the song “Princes of the Universe” by Queen, and the need to be the “king of his own existence,” influenced the exhibit.

Williams has been spending large parts of his day moving, cleaning, creating and reorganizing artwork. He takes as long as he wants. He doesn’t have a watch and he doesn’t make plans. He refuses to be a “puppet or a pawn” in a conventional job.

“It hurts too much,” he said, “to let anyone play with my life.”

Jacqueline Williams said she’s happy for her brother. Though she’s in Houston now, she used to let her older brother display his artwork in her hair salon in Randallstown when she lived in Baltimore.

“I’m just excited for him because I just believe we should follow our passions,” she said.

Williams recently sat down and placed a store-bought Danish bundt cake with a missing piece on his lap. Several squirrels scurried around him, flicking their puffy tales as he threw pieces of the yellow treat.

He didn’t come to the park to be Jane Goodall, “but that’s what’s happening,” he jokes. A bell dinged and an older man and woman on a bike rode by and waved to Williams.

They’re really nice people, he said, but was unsure when he’d see them again. But they know right where to find him.