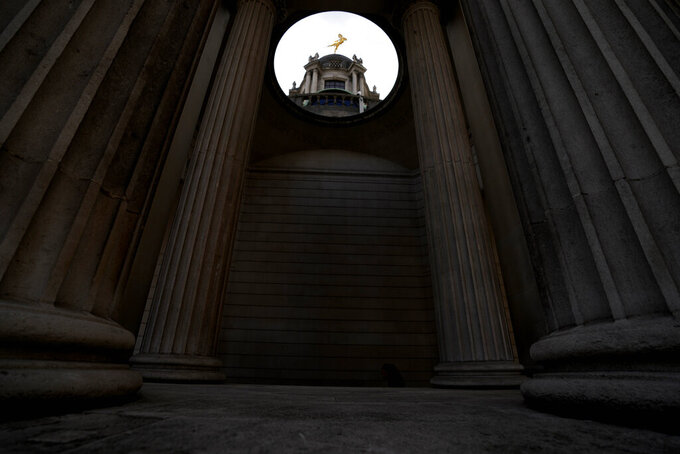 Frank Augstein, ASSOCIATED PRESS
The building of the Bank of England in London, Thursday, Aug. 4, 2022. The Bank of England will hold the Monetary Policy Report Press Conference on interest rates that are expected to go up by half a percentage point, which would be the biggest rise in 27 years. (AP Photo/Frank Augstein)

LONDON (AP) — The Bank of England announced its biggest interest rate increase in 27 years on Thursday as it forecast that the war in Ukraine would fuel further inflation and tip the U.K. economy into a prolonged recession.

Those pressures persuaded the bank’s Monetary Policy Committee to boost its key interest rate by 0.5 percentage points, the biggest of six consecutive increases since December. The rate now stands at 1.75%, the highest since the depths of the global financial crisis in late 2008.

Gov. Andrew Bailey defended the move, which will increase borrowing costs for consumers, saying the bank has a duty to control price increases that disproportionately affect the poorest in society.

“I recognize the significant impact this will have and how difficult the cost of living challenge will continue to be for many people in the United Kingdom,’’ Bailey said at a news conference. “Inflation hits the least well-off hardest. But if we don’t act against inflation becoming persistent, the consequences later will be worse.”

Central banks worldwide are struggling to balance efforts to control inflation while minimizing the fallout for economies that were just beginning to recover from the coronavirus pandemic. Higher interest rates increase borrowing costs for businesses and consumers, which tends to reduce spending and ease rising prices. But such moves also slow economic growth.

The inflation picture has worsened in recent months as Russia cut natural gas shipments to Europe in retaliation for the west’s support of Ukraine. That has triggered unprecedented increases in energy prices worldwide.

The Bank of England estimates that gas and electricity bills will eat up an additional 3.5% of household incomes in the period from 2021-2023. That’s five times more than the increase British households experienced during the energy crisis of the 1970s.

Although it was the first major central bank to start raising rates in December, the Bank of England has faced criticism in recent months as its peers began to move more aggressively.

The U.S. Federal Reserve increased its key rate by three-quarters of a point in each of the past two months to a range of 2.25% to 2.5%. The U.S. economy shrank for a second straight quarter in the April through June period, raising fears that the nation may be approaching a recession.

Victoria Scholar, head of investment at interactive investor, said the Bank of England approved a big increase because it didn’t want to fall behind the curve. The real risk is “stagflation,” a prolonged period of economic stagnation combined with rapidly rising prices that can be very difficult to get out of, she said.

“It’s very much doom and gloom from the Bank of England, and not least the fact that it’s decided to carry out this almost double rate hike,” Scholar said.

The central bank’s actions have become an issue in the contest to replace Prime Minister Boris Johnson, who will step down next month. Supporters of Foreign Secretary Liz Truss, the leading candidate to succeed Johnson, said Thursday she would revisit the question of whether the bank should remain independent.

The Bank of England has been independent of government control since 1997. The last time the U.K. increased interest rates by 0.5 percentage points was in December 1994, when rate decisions were still made by the government’s treasury chief in consultation with the central bank governor.

Bailey declined to respond to questions about the bank’s independence, saying he hopes to work closely with whoever becomes prime minister.

The current landscape is especially complicated for central bank policy makers because many of the factors driving inflation are determined by international events beyond their control.

A first wave of inflation was triggered by international supply bottlenecks and increased demand for energy as the coronavirus pandemic began to ease last year. That was followed quickly by Russia’s invasion of Ukraine, which triggered sharp increases in food and energy prices.

Those pressures are expected to dissipate over time, and there are signs that prices for some goods are beginning to fall, the Bank of England said.

But inflation is now becoming embedded in the U.K. economy, with business owners raising prices and workers demanding wage increases to protect their living standards. That is what the central bank is targeting with Thursday’s rate increase.

Inflation is expected to slow to 9.5% in the third quarter of 2023 and drop in line with the 2% target a year later, the central bank forecast.

But Bailey said the uncertainty about these forecasts is “exceptionally large” because there is no way to predict what will happen with energy prices.

“The committee will be particularly alert to any indications of more persistent inflationary pressures and will, if necessary, act forcefully in response.”