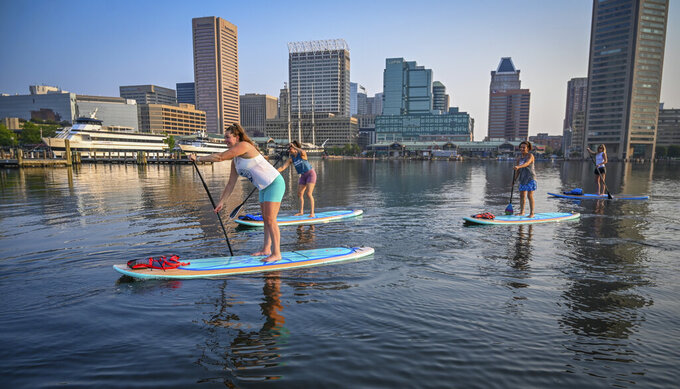 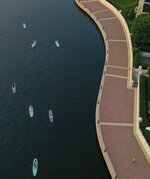 BALTIMORE (AP) — A family of ducks swam along Baltimore’s Inner Harbor as the sun rose, glimmers of pink and red reflecting off the buildings dotting the harbor. Aside from a few early-morning joggers, the harbor was still. But the ducks were about to have some company — stand-up paddleboard instructor Emily Knaus was setting up for her regular Wednesday sunrise class on a pier next to the Rusty Scupper.

“Watching the harbor wake up when it’s quiet, it’s really kind of special,” said Lauren Flowers, 51, one of the participants in Knaus’ class. “If I take one deep breath, I can feel my blood pressure drop 10 points.”

The sunrise class is one of the offerings from stand-up paddleboard company B’More SUP, which opened a new location on the Inner Harbor this summer. Owner Jessie Benson said she’s dreamed of opening an Inner Harbor location ever since she started paddling in 2010.

“I’m very used to being on the water in Baltimore and I just have this passion for showing people the city through a different perspective,” Benson said.

Many Baltimore residents might not find paddling out into the harbor so appealing. The waterway doesn’t have the best reputation, as sewage overflows and other pollutants have streamed into the water over the years. The water is becoming safer, but is not yet swimmable, according to Baltimore Waterfront Partnership’s 2020 Harbor Heartbeat Report.

So the big question for potential paddleboarders: What happens if you fall in?

That doesn’t faze Lisa Gerolamo, one of the recent class participants. It was her first time taking a board into the harbor, but the nurse from Canton has paddleboarded consistently for the last five years. Gerolamo, 32, has traveled to quite a few places, including Costa Rica, for paddling retreats.

“I’ve done quite a bit of traveling and I’ve probably swam in questionable places,” Gerolamo said. “There’s never been a hesitation in my mind.”

“People definitely have an initial feeling of ‘yuck’ when they think about the Baltimore Harbor,” said Adam Lindquist, director of the Waterfront Partnership’s Healthy Harbor Initiative. “But the reality is that the harbor is much cleaner than people perceive it to be.”

James Bentley, spokesman for the city Department of Public Works, said the agency discourages people from swimming in “any urban lake or stream” at this time. But he emphasized the department’s support of the Healthy Harbor Initiative and other efforts to clean up Baltimore’s waters. In addition to alleviating sewage backups, the department is working to reduce nutrient levels, allowing for greater oxygen levels in the water.

Despite such progress, Blue Water Baltimore Waterkeeper Alice Volpitta stressed that the harbor is a long way from meeting Maryland’s criteria for swimmable waters. Bacteria levels vary day by day depending on rainfall, but some days those levels are dangerously high.

“Just because something is getting better, it still doesn’t mean it’s good enough,” Volpitta said.

This doesn’t mean it’s unilaterally unsafe to paddleboard or enjoy other recreational activities on the harbor, she said.

“We have been conditioned over time to see the harbor as this untouchable entity and that’s really not true,” Volpitta said. “There’s a lot of life that exists in the harbor.”

She recommends a risk management approach, and encourages people to make a decision based on a variety of factors. For example, it is unsafe to enter the harbor after powerful rainstorms that can send gallons of sewage into streams and eventually the harbor. If you have an open cut, you could develop a staph infection.

Benson said she follows water safety data closely, and cancels sessions if they’re within 48 hours after heavy rainfall. All instructors are certified in water safety training. B’More SUP also accepts only experienced paddlers, who are much less likely to fall in, at its harbor location. First-time paddleboarders need to take a class at B’More SUP’s Dundalk location if they want to paddle in the harbor.

Even with advanced paddlers, B’More SUP can’t eliminate the risk of falling in. Benson said there are showers on site for people to use if they slip into the water.

Knaus, the main Inner Harbor instructor, said she’s seen just one person fall in. The paddler went down laughing and, when they paddled back, hopped in the shower.

At the sunrise session on an early July Wednesday, Knaus helped the six paddlers launch off the pier and slide out into the harbor. They headed past the Ritz Carlton apartments and toward the Domino Sugar sign. Knaus said she keeps her eyes peeled for the wildlife nestled in the harbor, such as jellyfish and ducks.

Lizette Tirado, 55, has paddle boarded for over five years. She loves paddling back home in Puerto Rico, but she’s also a longtime fan of paddling in the harbor. She first paddled in the Inner Harbor about three years ago with the Baltimore Floatilla, an annual five-mile paddling event.

“I understand that some people might be hesitant, but it really is beautiful,” said Tirado, a health care specialist living in Dundalk.

Volpitta said she’s excited people are taking advantage of the harbor, and hopes this will encourage people to take better care of the resource. But she emphasized that people need to be able to make informed decisions, and called on the city to install educational signage around the harbor to make people aware of the risks of swimming.

“This is a nuanced issue, and people need to be able to make those choices on a case-by-case basis,” Volpitta said. “And the only way that people are ever going to be able to do that is by having the data at their fingertips and having the knowledge that this is potentially an issue.”

“These tend to be more along streams and rivers where there is no separation from the water and where it appears scenic,” he said.

For the sunrise B’More SUP crew, paddle boarding on the harbor is about pure enjoyment. Flowers, a nurse practitioner in Dundalk, said she’d get up early to paddle in her city any day.

“Having a high-stress job, coming out here and getting an hour of peace, it’s totally worth it to get up at 5 in the morning,” Flowers said.