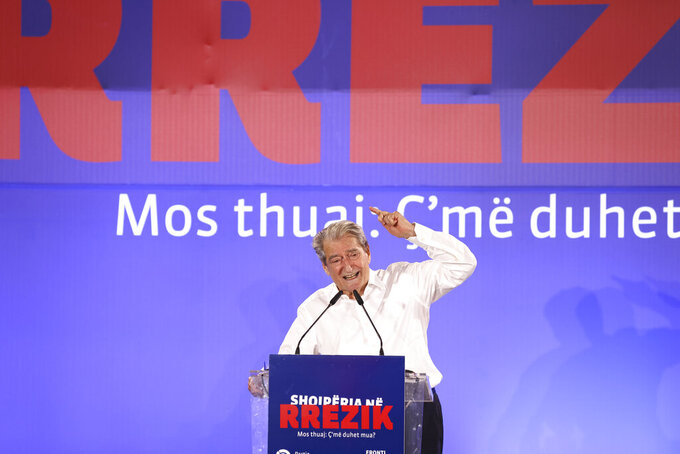 Franc Zhurda, ASSOCIATED PRESS
Former Albanian Prime Minister and Democratic Party leader Sali Berisha speaks during an anti-government rally in Tirana, Albania, on Thursday, July 7, 2022. The Albanian opposition rallied Thursday in the capital Tirana calling for the resignation of the government which they blame for corruption and inflicting poverty. (AP Photo/Franc Zhurda)

TIRANA, Albania (AP) — Former Albanian Prime Minister Sali Berisha said Friday that the United Kingdom has barred him from entering the country, citing his involvement with organized crime and corruption.

The British Embassy in Tirana tweeted Thursday that “the U.K. has taken disruptive action against several Albanian individuals with ties to criminality and corruption." The embassy did not name the people targeted.

Berisha, the leader of Albania's main opposition Democratic Party, said Britain's home secretary notified him in a letter that he described as confidential. He said he decided to make his travel ban public himself.

Fighting corruption and organized crime has been post-communist Albania’s Achilles’ heel, which has strongly affected the country’s democratic, economic and social development.

Secretary of State Antony Blinken also barred Berisha for entering the United States more than a year ago for alleged corrupt acts during his time as prime minister.

Berisha was Albania’s first post-communist president from 1992 until 1997, when a pyramid scheme in which many Albanians lost their life savings took the country to the brink of anarchy.

His Democratic Party won the 2005 election and Berisha became prime minister for two terms that ended in 2013. Since then, he has served as a lawmaker in the Albanian Parliament.