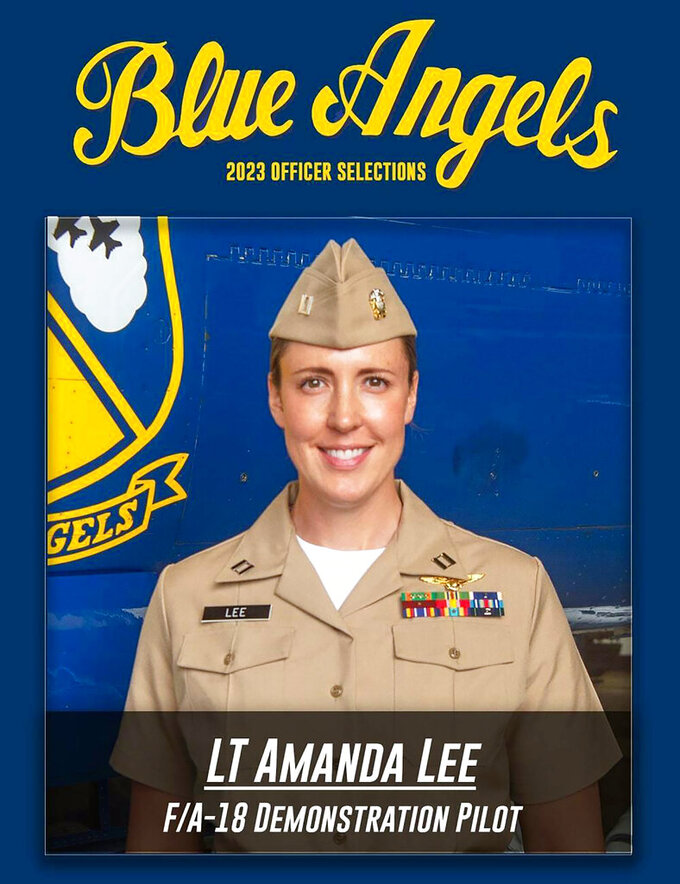 Chief Petty Officer Paul Archer, ASSOCIATED PRESS
In this photo released by Defense Visual Information Distribution Service, Lt. Amanda Lee is shown. The U.S. Navy's Blue Angels flying squadron have named a woman as a demonstration pilot for the first time. Lt. Amanda Lee, of Mounds View, Minnesota, was announced Monday, July 18, 2022, as a pilot assigned to the the “Gladiators” of Strike Fighter Squadron 106. She is a 2013 graduate of Old Dominion University, the Blue Angels said in a Facebook post announcing its 2023 officer selections. (CPO Paul Archer/DVIDS U.S. Navy via AP)

PENSACOLA, Fla. (AP) — The U.S. Navy's Blue Angels have named the first woman as a demonstration pilot for the 2023 air show season.

Women have served with the Blue Angels in other capacities for more than 55 years, but Lt. Amanda Lee, of Mounds View, Minnesota, is the first to join the iconic flight squadron as a pilot, the Navy said.

Lee, a member of the “Gladiators” of Strike Fighter Squadron 106, graduated from Old Dominion University in 2013, the Blue Angels said Monday in a Facebook post announcing the new team.

“We had an overwhelming number of applicants from all over the globe this year,” said Capt. Brian Kesselring, the squadron's commanding officer and flight leader. “We look forward to training our fantastic new team members, passing on the torch, and watching the incredible things this team will accomplish in 2023.”

The Blue Angels also named five other new members of the team based at the Naval Air Station in Pensacola, Florida, including pilots Navy Lt. Cmdr. Thomas Zimmerman, of Baltimore, Maryland and Marine Corps Capt. Samuel Petko of Osceola, Indiana.

The new team members will report to the squadron in September for a two-month turnover period. Once the 2022 show season concludes in November, they will embark on a rigorous five-month training program at NAS Pensacola and Naval Air Facility El Centro, Calif.

The team's mission is to showcase the teamwork and professionalism of the United States Navy and Marine Corps through flight demonstrations and community outreach.