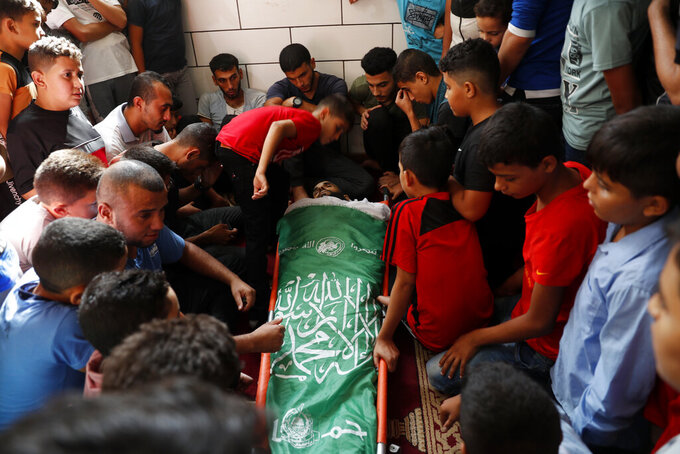 Adel Hana, ASSOCIATED PRESS
Relatives and mourners gather around the body of Mohammed Abu Ammar at the main mosque during his funeral in Bureij refugee camp, central Gaza Strip, Thursday, Sept. 30, 2021. Israeli troops shot and killed Abu Ammar, a 40-year-old Palestinian, on Thursday as he was setting bird traps in the Gaza Strip near the Israeli border, his family said. The military said it was investigating. (AP Photo/Adel Hana)

GAZA CITY, Gaza Strip (AP) — Israeli troops shot and killed a 40-year-old Palestinian man in the Gaza Strip on Thursday as he was setting bird traps near the Israeli border, his family said. The military said it was investigating.

The shooting came hours after two other Palestinians were killed in separate incidents in Jerusalem and the occupied West Bank. The shooting in Gaza occurred just before noon, near the Bureij refugee camp.

Israel and Gaza's Hamas rulers are bitter enemies that have fought four wars since 2007 — most recently in May. The border area remains volatile and three Palestinians and an Israeli soldier have been killed in clashes in the area in recent weeks.

There were no signs that Mohammed Abu Ammar was involved in militant activity when he was shot Wednesday.

His cousin, Othman Abu Ammar, said Mohammed, who lived in Bureij, earned a living by setting traps in the area and catching birds that he would sell.

No armed groups claimed him as a member, and there were no uniformed militants at his funeral.

However, his body was later wrapped in a green Hamas flag before it was buried. Militant groups often rush to wrap bodies of people killed in fighting with Israel to help boost their public standing.

Gaza militant groups, including Hamas, issued a joint statement saying Israel had crossed “all red lines” and that the killing “will call for harsh responses of a special kind.”

In a statement, the army said it spotted three suspects approaching the separation fence.

“One of the suspects was seen carrying a suspicious backpack and digging in the ground," it said, adding that “troops at the scene fired towards the suspect.” It said it was aware of reports that a man had been killed and was investigating.

Earlier Thursday, Israeli police shot a Palestinian woman who allegedly attempted to stab an officer in Jerusalem's Old City. She was pronounced dead at the scene.

Police said the incident occurred outside an entrance to a flashpoint holy site known to Muslims as the Noble Sanctuary, home to the Al Aqsa Mosque, and to Jews as the Temple Mount.

The Palestinian Health Ministry identified the woman as 30-year-old Isra Khzamiah from a northern West Bank town near the city of Jenin, an area where tensions have run high following an escape by Palestinian prisoners from an Israeli prison earlier this month.

Palestinians have carried out a number of car-ramming, shooting and stabbing attacks targeting Israeli security forces and civilians in recent years in Jerusalem and the occupied West Bank. The Palestinians and Israeli human rights groups say security personnel often use excessive force and in some cases have killed people mistaken as assailants.

In a separate incident, Israel's paramilitary border police force said it killed a Palestinian man who opened fire on troops as they conducted an arrest raid in the northern West Bank.

The official Palestinian news agency, WAFA, reported that a 22-year-old man was killed and two others wounded.

The shooting occurred in Burqin, a town near the northern West Bank city of Jenin that was the scene of a major gunbattle between Israeli troops and Palestinians earlier this week in which two Palestinians were killed and two Israeli soldiers seriously wounded during a raid targeting a Hamas militant cell.