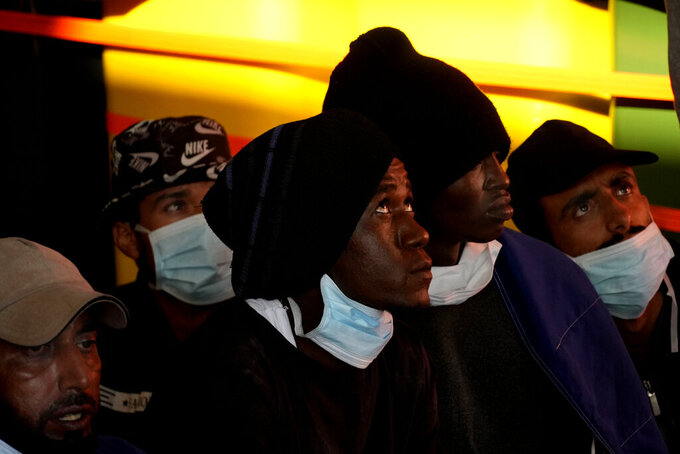 Petros Karadjias, ASSOCIATED PRESS
Migrants sit on the floor of the Open Arms Uno ship after being rescued from a rubber boat in the sea during a rescue operation at international waters zone of Libya SAR (Search and Rescue) in the Mediterranean sea, Thursday, Sept. 15, 2022. Seventeen migrants from Syria and Sudan, including six children, were rescued by the Spanish NGO Open Arms crew members after their boat overturned and started to sink. (AP Photo/Petros Karadjias)

UNITED NATIONS (AP) — The U.N. Security Council voted unanimously Thursday to authorize for another year the inspection of vessels off the coast of Libya suspected of smuggling migrants or engaging in human trafficking from the North African nation.

The resolution reaffirms the need to end the proliferation of smuggling operations in the Mediterranean Sea, which U.N. Secretary-General Antonio Guterres said in his latest report remains “among the deadliest routes for refugees and migrants trying to reach Europe.”

The measure also “condemns all acts of migrant smuggling and human trafficking into, through and from the Libyan territory and off the coast of Libya, which undermine further the process of stabilization of Libya and endanger the lives of hundreds of thousands of people.”

Libya, which descended into chaos following the 2011 uprising that toppled and killed longtime dictator Moammar Gadhafi, has emerged as a major transit point for African and Arab migrants seeking to reach Europe as a way to escape war and poverty. Most migrants make the perilous journey in ill-equipped and unsafe rubber boats.

The European Union established a naval mission, Operation Sophia, in 2015 after tens of thousands of migrants began attempting to cross the Mediterranean. But Italy blocked Operation Sophia, saying the warships attracted migrants to Europe’s shores. Planes and drones were still used.

In March 2020, the EU launched a new operation in the Mediterranean aimed at enforcing the U.N. arms embargo on Libya, saying it would use aerial, satellite and maritime assets.

According to the U.N. chief’s report circulated Thursday, in the year ending Sept. 2, the U.N. refugee office and the International Organization for Migration estimated 1,751 refugees and migrants lost their lives or went missing in the Mediterranean — more than 1,344 on the central crossing. That was down from 2,192 the previous year, it said.

The EU estimated approximately 52,537 migrants and refugees were rescued or intercepted in 1,125 operations by various vessels in the Libya area. More than 12,352 were intercepted and returned to Libya, the report said.

Guterres said that “migrant smuggling and trafficking in persons constitute violations of international human rights law,” and he called for “decriminalizing” the entry, stay and departure of migrants from Libya. He also said that “collective expulsions are prohibited under international law and must end.”

The U.N. chief urged countries along migrant smuggling routes that lead to Libya to protect survivors of smuggling and trafficking and criminalize these acts.

Guterres reiterated his call for “a predictable and credible agreement for disembarkation” encompassing all 27 EU member nations, based on shared responsibility.

“With a view to sharing responsibilities with Libya, the international community should offer more resettlement opportunities and humanitarian evacuations of refugees from Libya,” Guterres said.