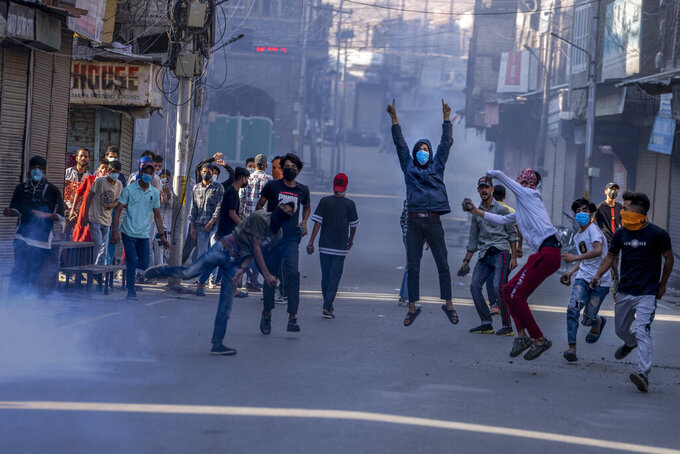 Dar Yasin, ASSOCIATED PRESS
Protesters clash with security forces during a protest against sentencing of Kashmiri separatist leader Yasin Malik, in Srinagar, Indian controlled Kashmir, Wednesday, May 25, 2022. An Indian court sentenced a Kashmiri separatist leader to life in prison on Wednesday after finding him guilty of terrorism and sedition, triggering a clash between protesters and police and a partial shutdown of businesses in the Indian-controlled portion of disputed Kashmir. (AP Photo/Dar Yasin)

NEW DELHI (AP) — An Indian court sentenced a Kashmiri separatist leader to life in prison on Wednesday after declaring him guilty of terrorism and sedition, triggering a clash between protesters and police and a partial shutdown of businesses in the Indian-controlled portion of Kashmir.

Mohammed Yasin Malik, 56, led the banned Jammu and Kashmir Liberation Front, one of the first armed rebel groups in the Indian-held area, but later shifted to peaceful means in seeking the end of Indian rule.

Muslim-majority Kashmir has been divided between India and Pakistan since British colonialists granted it independence in 1947. Both countries claim the region in its entirety and have fought two wars over its control.

Malik was arrested in 2019 and was convicted last week on charges of committing terrorist acts, illegally raising funds, belonging to a terrorist organization, and criminal conspiracy and sedition.

Before Wednesday's sentencing, dozens of Kashmiris gathered at Malik’s home in Srinagar, the largest city in Indian-controlled Kashmir. Some marched through the streets, chanting “We want freedom” and “Go back India.” Government forces fired tear gas at the marchers, who threw stones. No injuries were immediately reported.

Shops and businesses closed in the main centers of Srinagar.

Prosecutors said the judge rejected their request for a death sentence.

The government banned Malik's organization in 2019, accusing it of funding terrorism and blaming it for the deaths of minority Hindus in the Himalayan region.

Malik protested the charges during the trial and said he was a freedom fighter.

“The terrorism-related charges leveled against me are concocted, fabricated and politically motivated,” he said.

“If seeking azadi (freedom) is a crime, then I am ready to accept this crime and its consequences,” he told the judge.

“Today is a black day for Indian democracy & its justice system," Sharif tweeted. "India can imprison Yasin Malik physically but it can never imprison idea of freedom he symbolizes. Life imprisonment for valiant freedom fighter will provide fresh impetus to Kashmiris’ right to self-determination.”

In the late 1980s, Malik joined a group of young people who traveled to Pakistani-controlled Kashmir for arms training, seeking independence for all of Kashmir from India and Pakistan.

By 1989, Indian-controlled Kashmir was in the throes of a full-blown rebellion, with Malik and his comrades conducting attacks against the Indian security establishment and pro-India Kashmiri politicians.

India responded with a massive militarization of Kashmir, saying it was fighting a Pakistan-sponsored proxy war. It unleashed a brutal counterinsurgency campaign, and soldiers were given broad impunity and allowed to shoot suspects on sight or detain them indefinitely.

Malik was arrested during a raid by Indian troops in 1990 and was released in 1994. He took over control of the Jammu and Kashmir Liberation Front, shifting away from armed rebellion and seeking the end of Indian rule over the territory through peaceful political means.

In 2003, Malik and his associates began collecting signatures of Kashmiris seeking the right to self-determination. They traveled for two years to hundreds of villages and towns, gathering over 1.5 million signatures.

He helped lead an anti-India uprising in 2008 with large-scale protests that marked a shift from armed struggle to non-violent resistance. He continued to lead large public gatherings in subsequent years seeking an end of Indian rule.

Malik held several unsuccessful rounds of talks with the Indian government, including with two prime ministers. He is married to a Pakistani artist, Mushaal Hussein, and they have a 10-year-old daughter.

Most Muslim Kashmiris support the rebel goal of uniting the territory, either under Pakistani rule or as an independent country. Tens of thousands of civilians, rebels and government forces have been killed in the conflict since 1989.

The All Parties Hurriyat Conference, a coalition of anti-Indian Kashmiri political groups, said Malik was “being punished for his political beliefs” and was “convicted in invented cases under draconian laws.”

The group urged the Indian government to release all Kashmiri political prisoners and resolve the Kashmir conflict through dialogue.