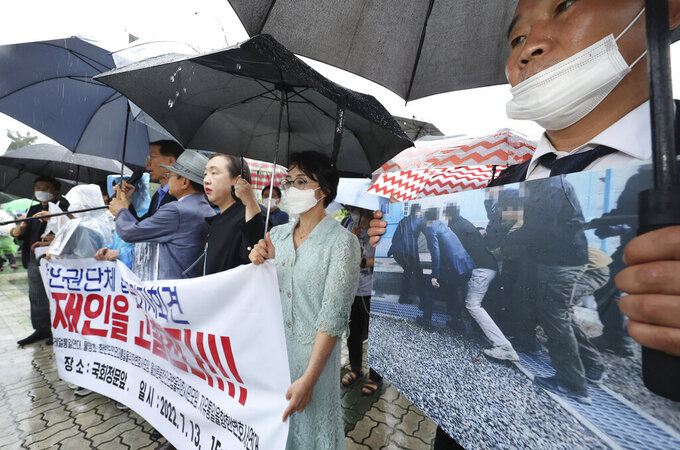 New conservative President Yoon Suk Yeol, who took office in May, has accused his liberal predecessor, Moon Jae-in, of being “submissive” to North Korea and has moved to resolve persistent suspicions about the handling of the two cases. His push has triggered a backlash from liberals who accuse him of political revenge against his rivals.

Wednesday’s raid came days after the National Intelligence Service, now under Yoon’s government, filed charges against two of its former directors who served under Moon. It accused them of abusing power, damaging public records and falsifying documents.

Prosecutors and other investigators searched the NIS headquarters near Seoul for documents, computer files and other materials related to the two cases, the Seoul Central District Prosecutors’ Office said, without elaborating.

The Moon government said the slain official was saddled with gambling debts and had family troubles when he swam to North Korea. But others disputed those claims.

Conservative critics say that assessment was meant to lessen possible public sympathy for the dead official and prevent an increase in anti-North Korea sentiment in South Korea. Last month, Yoon’s government said there was no evidence that the official attempted to flee to North Korea, overturning the Moon government’s assessment.

The other case involved the Moon government’s expulsion of two North Korean fishermen days after they were captured on their vessel off South Korea’s east coast.

Citing classified intelligence, the Moon administration called them “heinous criminals” who killed 16 fellow crew members and didn’t deserve to be recognized as refugees. But conservatives and human rights advocates suspected the Moon government had hurriedly expelled the fishermen after learning North Korean authorities were chasing them. They said the former government should have sent the fishermen through the South Korean judicial system, rather than repatriating them to a country where they were likely to face torture or execution.

By law, South Korea views North Korea as part of its territory and has a policy of accepting North Koreans wishing to resettle in the South. The 2019 deportation was the first of its kind since the end of the 1950-53 Korean War.

Earlier this week, Yoon’s government released photos of the repatriation that showed the fishermen, both blindfolded, apparently resisting being dragged and handed over to North Korea at a land border crossing. Presidential spokesperson Kang In-sun said Wednesday that the Yoon government would get to the bottom of the repatriation. She said a forced repatriation would be a “crime against humanity” that violates both international and domestic laws.

“What’s clear is the Moon Jae-in government was so desperate to please North Korean supreme leader Kim Jong Un that they shamefully disregarded basic principles of human rights and humanity,” Robertson said. “The two men’s desperate resistance to being forced back that is so apparent in those photos show that they understood they were fighting for their lives.”

During his five-year term, Moon’s appeasement policy invited both praise and criticism. His supporters credited him with achieving now-stalled cooperation with North Korea and avoiding major armed clashes, but opponents say he was a naive North Korea sympathizer who ended up helping the North buy time to advance its nuclear program in the face of international sanctions and pressure.

His liberal Democratic Party accused the Yoon government of using the two cases to launch a political offensive against Moon and his allies at a time when Yoon should focus on the economy.

Underscoring the political divide in South Korea, recent surveys showed about 48% of respondents viewed the Yoon government’s investigations of former administration officials as political retaliation while 44%-45% called them fair and legitimate.