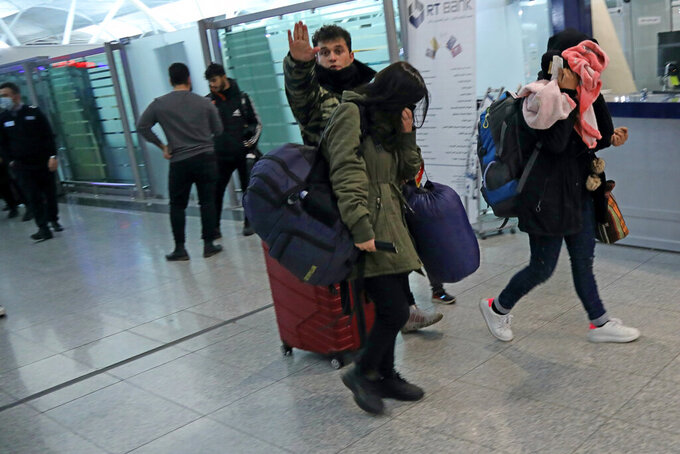 IRBIL, Iraq (AP) — Defeated but somewhat relieved, a second group of Iraqis on Friday returned home to northern Iraq after a failed quest to reach the European Union, citing maltreatment and abuse suffered at the hands of Belarusian authorities.

Over 570 people returned on two flights that landed in Irbil International Airport after 2 a.m. and 7 a.m. respectively in Iraq's northern Kurdish-run region, according to Lawk Ghafuri, spokesman for the Kurdistan Regional Government. The first flight carried 170, the other over 400 returnees.

A group of children showed reporters their hands with wounds and infections. A returned migrant lowered his surgical mask to embrace his children who came to meet him at the airport.

Iraq’s northern Kurdistan region has been shaken by a migrant crisis resulting from thousands of people from around the Middle East — a disproportionate number of them Iraqis — trying to cross into the EU through a backdoor opened by non-EU member Belarus. Most of the repatriated Iraqis from Belarus have been Iraqi Kurds. Last week, 430 Iraqis returned home.

Some cited the cruelty of Belarusian border authorities — from beatings to threats — and attempts to push them to cross into neighboring EU countries Poland and Lithuania. They had hoped to cross, just not under threats from the Belarusians.

Thousands of migrants remain stranded between borders. Most are fleeing conflict or hopelessness in the Middle East and aim to reach Germany or other western European countries. But Poland has taken a hard line about letting them in, and Belarus didn’t want them returning to the capital of Minsk or otherwise settling in the country.

“We are very thankful for arriving home, because the humanity and justice that people say about Europe is far from reality. It is not true at all. We have been beaten badly," said Awat Nassir, a returnee at the airport.

“Now people are regretting they went there and demand to come back home, because it is 15 degrees below zero in Belarus now,” he said, an exaggeration of the current temperature of around minus four degrees, but which may feel colder due to the damp and wind chill factor.

Iraqi Kurds in large numbers have chosen to make the perilous journey by selling their belongings to pay smugglers. They cite rising unemployment, endemic corruption and a recent economic crisis that slashed state salaries in the Kurdish-run region as driving their desire to leave.

Budget shortfalls spurred by a crash in oil prices last year has made life more difficult for Iraqi Kurds. The autonomous region relies on budget transfers from the federal government to pay public wages, but these have been intermittent because of a long-standing dispute over Kurdistan's independent oil export policy. As a result, austerity measures were introduced and wages were slashed last year.

Iraqi Kurds have taken to the streets to protest salary cuts and budget shortfalls. Water cannons were used to disperse dozens of student protesters in Sulaymaniyah province this week. They were mostly university students demanding the Kurdistan Regional Government pay their student allowances fallen into arrears.

The West has accused Belarus President Alexander Lukashenko of using the migrants as pawns to destabilize the 27-nation bloc in retaliation for its sanctions on his authoritarian regime. Belarus denies engineering the crisis, which has seen migrants entering the country since summer and then trying to cross into Poland, Lithuania and Latvia.

“The most difficult thing is when you see children stuck there," said Emad Hussein, another returnee. “It is very hard.”