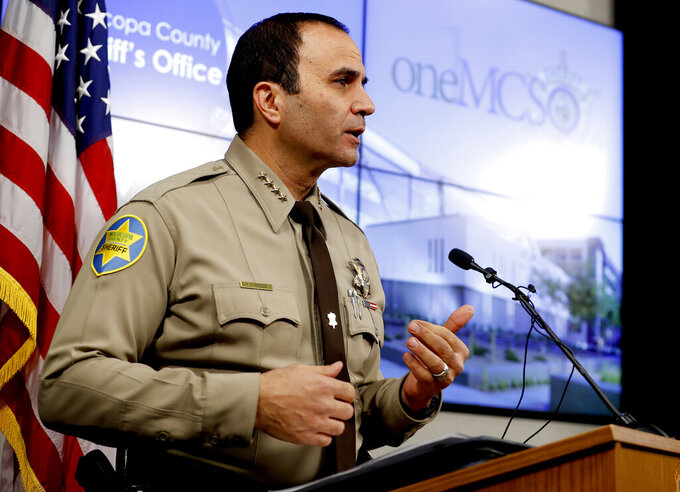 Matt York, ASSOCIATED PRESS
FILE - Maricopa County Sheriff Paul Penzone speaks at a news conference in Phoenix on Feb. 14, 2019. On Tuesday, Nov. 8, 2022, a federal judge held Penzone in civil contempt of court in the same racial profiling case that his predecessor, Joe Arpaio, was held in contempt of six years earlier. Penzone's contempt ruling stemmed from his failure to complete internal affairs investigations in a timely manner, leading to a huge backlog of cases. Arpaio was found in contempt for disobeying a 2011 court order to stop his traffic patrols that targeted immigrants. (AP Photo/Matt York, File)

PHOENIX (AP) — A federal judge on Tuesday found the sheriff of metro Phoenix to be in civil contempt of court in the same racial profiling case in which his predecessor, Joe Arpaio, was found to be in contempt six years earlier.

Maricopa County Sheriff Paul Penzone was found to be in contempt for noncompliance with a court-ordered overhaul of his agency’s much criticized internal affairs operation, which has a backlog of 2,100 investigations, each taking an average of more than 600 days to complete. A court order requires those investigations to be completed with 60 to 85 days, depending on which operation within the agency handles the case.

The judge wrote that Penzone “does not demonstrate that he has taken all reasonable steps to comply with the order, especially as the backlog has increased. The backlog, despite Sheriff Penzone’s knowledge of it, only gets worse.”

In a statement, Penzone said he understands but disagrees with the contempt ruling and defended the quality of the internal investigation conducted by his office.

“Despite our hard work and considerable staff, the volume of cases was overwhelming and exceeded the capacity of our internal affairs division. I have been and continue to stay committed to solving that problem,” Penzone said.

Penzone, a Democrat who unseated the Republican sheriff in 2016 on promises to turn the page on Arpaio’s headline-grabbing tactics and get the county’s business in order in the profiling case, didn’t contest the allegation that he was in civil contempt and instead agreed to focus on remedies for the backlog.

Arpaio was found in both civil and criminal for disobeying a 2011 order to stop his traffic patrols that targeted immigrants. He was spared a possible jail sentence when his misdemeanor conviction was pardoned by then-President Donald Trump in 2017. His defiance in the profile case contributed significantly to his defeat after 24 years in office.

The sheriff’s office was found in 2013 to have racially profiled Latinos in Arpaio’s immigration patrols.

The verdict led to two court-ordered overhauls of the agency, one on its traffic enforcement division and another on its internal affairs operation, which under Arpaio had been criticized for biased decision-making and shielding sheriff’s officials from accountability. The court stripped the sheriff’s office of some of its autonomy over internal affairs.

The attorneys who have pressed the profiling case against the sheriff’s office had requested contempt proceedings against Penzone, saying the length of the internal investigations has resulted in lost evidence that makes it more likely that officer misconduct won’t be confronted.

They also said failing to investigate internal complaints on a timely basis harms the class of Hispanics covered by the profiling lawsuit, because officers can continue interacting with them while the investigations are pending.

A court-appointed official who oversees the sheriff’s office and has criticized Penzone for failing to fill new internal affairs staff positions that were already budgeted by the county has said the slowness in completing the investigations was unacceptable for both members of the public who make complaints and officers awaiting the findings.

In the past, Penzone has said his office made warnings for several years ago about the growing caseload, but its suggestions for confronting the problem were rejected by court officials and opposing lawyers.

In his latest order, Snow barred the sheriff’s office from reducing staffing levels in internal affairs while the backlog remains in effect and threatened fines if the agency fails to fill seven vacant positions for sworn officers or civilian investigators in internal affairs within 60 days.

The amount of the fine hasn’t yet been specified. But the judge said if any of the posts are left vacant, the sheriff’s office will face a fine three times the amount of an internal affairs sergeant’s annual salary for each vacancy. The sheriff’s office is required to provide that salary figure to the court within two weeks.

Even though Arpaio’s immigration patrols ended nine years ago — and the brash lawman was voted out of office nearly six years ago — taxpayers in metro Phoenix have paid eight-figure bills every year since 2015 in the case that challenged his crackdowns.

Taxpayers have paid $207 million in compliance and legal costs in the profiling case over the last 14 years. Another $28 million is expected to be spent on the case by the summer of 2023, according to county records.

Despite the money spent and efforts made to overhaul the agency’s traffic enforcement operations, the sheriff’s office continues to face criticism for its treatment of Hispanic drivers.

A court-ordered study of the agency’s traffic stops in 2021 concluded that stops of Hispanic drivers were more likely to last longer and result in searches or arrests than those of white drivers. The report echoed some of the same conclusions from past traffic enforcement studies aimed at identifying signs of racial bias in stops.

This story has been corrected to show the order was issued Tuesday, not Wednesday.