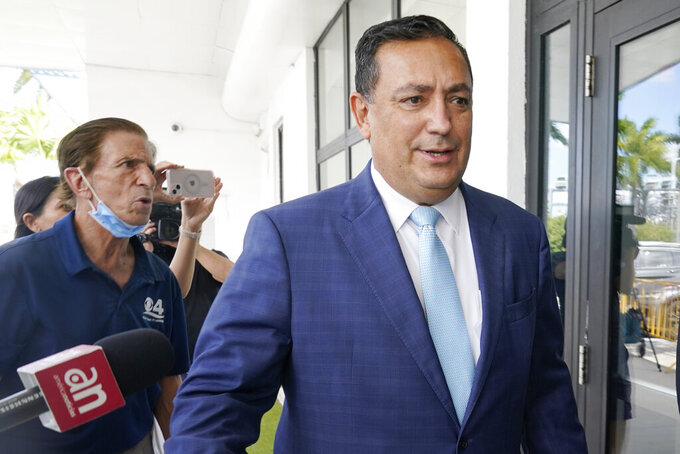 Marta Lavandier, ASSOCIATED PRESS
FILE - Then-Miami police Chief Art Acevedo arrives at Miami City Hall for a hearing to determine his job, on Oct. 14, 2021, in Miami. Fired Miami police chief Art Acevedo will become the latest person to serve as the interim leader of police in a Colorado city where police officers and paramedics are being prosecuted in the death of a Black man in 2019. Aurora, a city east of Denver, announced Tuesday, Nov. 15, 2022, that Acevedo will serve as the city's second interim police chief as its search for a permanent chief drags on. (AP Photo/Marta Lavandier, File)

DENVER (AP) — Fired Miami police chief Art Acevedo will be the latest interim police leader in a Colorado city where officers and paramedics are being prosecuted in the death of a Black man in 2019.

Aurora, a sprawling, diverse city east of Denver, announced Tuesday that Acevedo had reached out to officials there offering to serve as the city's second interim police chief while the search for a permanent chief drags on.

After leading departments in Austin and Houston, Acevedo was hired to become Miami's police chief last year. The city's mayor hailed him as the Michael Jordan and Tom Brady of police chiefs. But Acevedo created controversy by taking over the internal affairs unit that investigates police misconduct and making significant changes to his command staff.

He was fired after six months on the job.

Acevedo later sued, saying his firing was in retaliation for speaking out against corruption and reporting abuses of power by elected officials.

In April, Aurora fired the police chief it hired as it was under scrutiny for the killing of Elijah McClain, 23, who was put into a chokehold by an officer and injected with a powerful sedative. The fatal encounter provoked national outcry during racial injustice protests in 2020.

In a press release issued by Aurora announcing his hiring, Acevedo said the city reminded him of Houston because both are diverse and culturally rich.

“As a bilingual Cuban American born in Cuba and raised in the U.S., I am intimately familiar with the challenges facing diverse communities like Aurora, and I applaud the city’s simultaneous efforts to tackle crime and implement public safety changes to better reflect the people it serves," he said.

The previous police chief, Vanessa Wilson, was hired in 2020. She tried to institute reforms in Aurora's police department, and her lawyers have alleged she was the victim of a conspiracy by the city and council members to blame her for longstanding problems in the department.

Last year, Aurora signed an agreement with State Attorney General Phil Weiser to make changes aimed at ending a pattern of racially biased policing and excessive force. Before that, Wilson also acted quickly to discipline and fire officers accused of misconduct, including officers who took and shared photos appearing to mock McClain’s death.

Following Wilson's ouster, Aurora's former police chief, Dan Oates, came out of retirement to serve as interim chief. However, Aurora city manager Jim Twombly said the city knew his time with the department would be brief and that Oates would return to his home and family in Florida after Acevedo transitions in in early December. He thanked Oates for his service and praised Acevedo.

“Chief Acevedo has been a fixture in the national law enforcement community for years and has been vocal about needed and measured improvements in policing and public safety across the country. We are honored that he reached out to us, eager to assist us with the ongoing public safety changes we have been implementing,” Twombly said in the announcement.