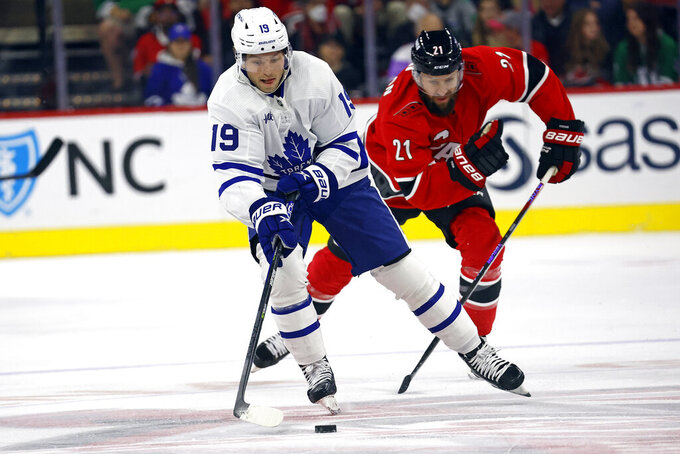 RALEIGH, N.C. (AP) — John Tavares scored the tiebreaking goal in the third period and the Toronto Maple Leafs beat the Carolina Hurricanes 3-1 Sunday for their first three-game winning streak of the season.

Calle Jarnkrok and William Nylander also scored to help Toronto win for the second time in seven road games. Erik Kallgren had 29 saves to get his first victory of the season.

“I’m just happy about the win,” Kallgren said. “We played so solid defensively. Games like this make it very, very easy for me.”

The outcome added to a rewarding two-day stretch for the Maple Leafs, who beat the Boston Bruins on Saturday night.

“We talked about it being a big weekend for us, especially with back-to-backs against two great teams,” Maple Leafs right forward Mitch Marner said.

Stefan Noesen scored and Frederik Andersen had 18 saves for Carolina, which snapped a four-game winning streak.

“We had our chances and at the end of the day we have to play a full 60,” Hurricanes defenseman Jaccob Slavin said.

Tavares skated down the slot, took a pass from Marner and scored at 8:24 of the third on the Maple Leafs’ first shot of the period for a 2-1 lead. Tavares has a team-high eight goals.

“I just tried to put it in a spot where he could just one-touch it in,” Marner said.

Nylander added his fifth with 3:35 remaining to seal the win.

The Maple Leafs won despite Auston Matthews failing to register a shot on goal for the first time this season. He had at least three shots in every previous game and averaged 5.1 per game.

“We have a deep team here,” Marner said. “It’s great to see all four lines contributing.”

The Maple Leafs were limited to a season-low 21 shots on goal.

“You make one little mistake and they’re going to make you pay,” Hurricanes captain Jordan Staal said. “And that was it.”

The Hurricanes had scored at least two goals in each game this season.

“I didn’t think we were great, but we certainly weren’t poor,” Carolina coach Rod Brind’Amour said. “We need to capitalize on a couple of chances we had.”

Noesen’s power-play goal at 8:11 of the first period opened the scoring. It was his second of the season and second in four games.

“We were in a good spot there,” Brind’Amour said. “We just didn’t lay the hammer down there and keep going.”

Jarnkrok tied it with 1:30 to play in the second when he scored third goal of the season.

The Hurricanes have at least one power-play goal in four consecutive games. They never reached that mark last season, with three-game streaks five times.

In his place, Keith Petruzzelli was summoned from Toronto of the AHL for his first NHL assignment to serve as the backup. He was 6-0-0 with the Marlies.

“It has been a little crazy,” Petruzzelli said. “Not much sleep, a lot of travel and a lot of excitement.”

Hurricanes: At Florida on Wednesday night.