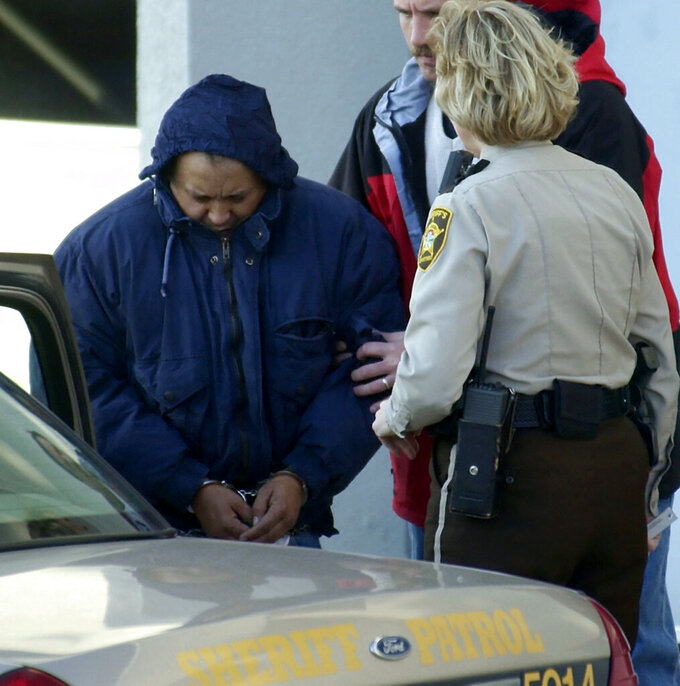 Ann Heisenfelt, ASSOCIATED PRESS
FILE - In this Dec. 3, 2003 file photo, Alfonso Rodriguez Jr., left, is helped into a sheriff's car after waiving extradition at the Polk County Courthouse in Crookston, Minn. North Dakota's first and only federal capital punishment case is on hold after a federal judge earlier this month threw the death sentence given Alfonso Rodriguez Jr. in 2006 in the death of college student Dru Sjodin. (AP Photo/Ann Heisenfelt File)

FARGO, N.D. (AP) — North Dakota’s first and only federal capital punishment case is on hold after a federal judge this month threw out the death sentence given to Alfonso Rodriguez Jr. in 2006 in the death of college student Dru Sjodin.

Judge Ralph Erickson, who presided over the original case before he was promoted to the 8th U.S. Circuit Court of Appeals, ruled on Sept. 3 that misleading testimony from the medical examiner about sexual assault and the failure of defense attorneys to outline a possible insanity defense warranted a new sentencing phase.

Rodriguez, a convicted sex offender from Crookston, Minnesota, kidnapped the 22-year-old Sjodin from a shopping mall in Grand Forks in 2003 and drove her to Minnesota, where he killed her and left her body in a field near Crookston. Sjodin's disappearance sparked days of massive searches, reshaped the way Minnesota handled sex offenders and led to the national sex offender registry being renamed for Sjodin.

Rodriguez remains locked up at a federal prison in Terre Haute, Indiana.

Here's a look at next steps in the case:

WHAT WILL THE GOVERNMENT DO NEXT?

It's up to President Joe Biden's administration. Prosecutors face a deadline, likely 60 days, to file a notice of appeal. But they'll need permission from the administration, said former U.S. Attorney Drew Wrigley, the lead prosecutor in the Sjodin case.

A successful appeal would reinstate Rodriguez's death penalty. A loss would require the Department of Justice to decide if it wants to go through the sentencing phase of the trial again to try to secure another death sentence.

Rodriguez's conviction wasn't overturned, so he would serve life in prison without parole if the government doesn't pursue a death sentence.

"The only question is, will the Biden Justice Department seek and participate in another hearing on the sentence in the case,” Wrigley said. “That is squarely their decision.”

The case was jointly investigated by the U.S. attorneys’ offices for North Dakota and Minnesota. Tom Heffelfinger, the U.S. attorney for Minnesota at the time, declined to discuss Erickson's ruling but said he hopes the Justice Department appeals it.

“I believe the case warranted the death penalty,” Heffelfinger said. “Otherwise I wouldn’t have signed off on the request for it.”

The Justice Department under Biden halted federal executions this summer after the Trump administration made frequent use of them, putting to death 13 inmates during a six-month period. Attorney General Merrick Garland imposed the moratorium on July 1 pending a review of the department's policies and procedures.

Biden has said he opposes the death penalty and his team vowed that he would take action to stop its use while in office. However, he hasn't pushed the issue and his administration has asked the U.S. Supreme Court to reinstate the original death sentence given to the surviving Boston Marathon bomber.

Appetite for the death penalty among Americans is at near-historic lows, with polls showing support hovering around 55%, according to the nonpartisan Death Penalty Information Center in Washington, D.C.

Joseph Daly, professor emeritus at Mitchell Hamline School of Law in St. Paul, said he doesn’t think the government will appeal and said it “would be kind of a political, sociological decision based on President Biden being against the death penalty in the past.”

Wrigley said he hopes the decision to appeal is guided by the case's legal merits and the “community’s judgment as represented by the jury’s death verdict,” not how the Biden administration views future death penalty cases.

WHAT ARE THE FAMILY’S WISHES?

Sjodin's parents support the death penalty, though they haven't been overly vocal about it. Her mother, Linda Walker, has said that “it wasn’t so much they were pushing for it” but they “wanted to do it for his past victims and for Dru.”

Wrigley said the family's position would surely be considered when deciding whether to appeal.

Wrigley suggested that prosecutors would argue that any flaws in the medical examiner's testimony shouldn't matter. In other words, imposing the death penalty shouldn't depend on proving Sjodin was raped.

“Does anyone imagine that the outcome on our decision to seek the death penalty or not would have been different if the medical examiner had (just) said she froze to death after he tied her, beat her, stabbed her and left her in the weeds?” he asked.

“This is probably going to read weird for people seeing that, oh wow, the former U.S. attorney is like going to bat for the defense lawyers,” Wrigley said. “Yes, I am. You know why? They deserve it.”