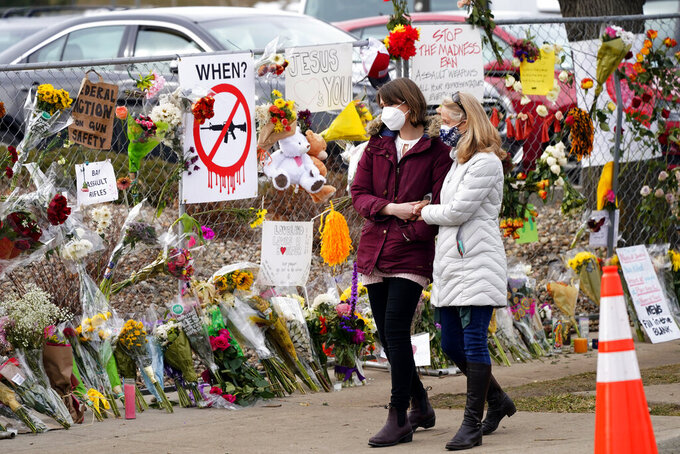 David Zalubowski, ASSOCIATED PRESS
FILE - Mourners walk along the temporary fence put up around the parking lot of a King Soopers grocery store where a mass shooting took place earlier in the week, Thursday, March 25, 2021, in Boulder, Colo. The Board of Commissioners of Boulder County, Colo., gave initial approval on Tuesday, July 5, 2022, to new county-wide gun control ordinances that would exceed both state and federal regulations. (AP Photo/David Zalubowski, File)

DENVER (AP) — Over a year after Colorado was rocked by a shooting that left 10 people dead in a King Soopers supermarket, one county is proposing gun control ordinances that include raising the minimum age to purchase firearms and prohibiting the sale of assault weapons.

With gun control bills facing greater opposition in many statehouses and in Congress, the Democratic bastion of Boulder County, where the shooting took place, may soon join several other Colorado municipalities in taking gun control into their own hands.

“We had watched the Aurora shooting, we had watched Columbine, and then it happened in our neighborhood,” said county Commissioner Matt Jones, referring to the 2012 Aurora theater shooting and the 1999 Columbine High School massacre. “It’s all too prevalent.”

The restrictions go far beyond state and federal gun regulations and come as the nation mourns victims of a Fourth of July weekend shooting outside Chicago that added to the over 300 killing sprees nationwide since the beginning of 2022, according to the Gun Violence Archive.

“It is deplorable that we can have this degree of gun violence,” said Commissioner Claire Levy after the panel tentatively endorsed the measures on Tuesday. “Ideally, there would be action at the national level and action at the state level, but in absence of that action, I think we need to do what we can.”

Not until last year was that possible in Colorado. In 2021, the Legislature, motivated by the Boulder shooting, joined at least eight other states in repealing a law that prevented local governments from passing gun ordinances more restrictive than state laws.

The five measures include limiting magazine capacity to 10 rounds instead of Colorado’s 15-round limit; extending the waiting period after purchasing firearms from three to 10 days; banning guns from county property and “sensitive places” such as bars; prohibiting firearms without serial numbers; and raising the minimum gun purchasing age from 18 to 21.

If the proposals pass, Boulder County will join other Colorado cities including Denver and Louisville in what some lawmakers hope to be a wave of local action across the state.

“It’s exactly what we intended when we passed the law,” said Stephen Fenberg, the Colorado Senate president who sponsored the 2021 bill. “It’s heartening.”

The Rocky Mountain Gun Owners, an affiliate of the National Association for Gun Rights, worries that the measures will infringe on residents’ right to protect themselves. Ray Hickman, a spokesperson for the organization, pointed to Chicago, which has strict gun laws but still suffers from a high homicide rate.

Hickman said that the group is considering its options to undermine the measures, which could include legal action. A public hearing on the proposals is set for Aug. 2.

The new regulations would build on state and federal law and only be enforceable within the county’s jurisdiction.

They were inspired in part by research from Giffords Law, a gun control advocacy group which helped some Colorado cities draft their own gun restrictions. Giffords Law found that while people aged 18-20 make up just 4% of the population, they commit 17% of known homicides.

Levy said that the measures are largely meant to tackle gun violence that often don't make national headlines but represent the vast majority of gun-related death — homicides and suicides.

With roughly 45,000 gun deaths a year in the U.S., mass shootings — defined as the killings of four people or more — make up less than a fraction. Over half are suicides.

“It’s a very large problem,” said Levy, “and it’s not just the headline-grabbing, fame-seeking, enraged young men who want to kill as many people as they can.”

Nearly three years before the supermarket shooting by a man with an AR-15 style weapon, Boulder voted to ban assault weapons. The measure was blocked in court under the old Colorado law barring local officials from making their own gun laws.

Investigators have not released any information about why they believe the man charged in the shooting, Ahmad Al Aliwi Alissa, launched the attack. He lived in the neighboring suburb of Arvada, where authorities say he passed a background check to legally buy a Ruger AR-556 pistol six days before the shooting.

Alissa’s prosecution has been on hold since December, when a judge ruled he was mentally incompetent to stand trial.

Jesse Bedayn is a corps member for the Associated Press/Report for America Statehouse News Initiative. Report for America is a nonprofit national service program that places journalists in local newsrooms to report on undercovered issues. Follow Bedayn on Twitter.