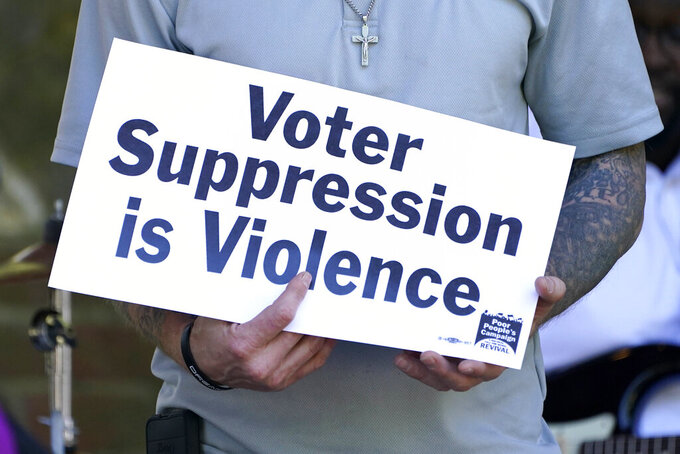 Rogelio V. Solis, ASSOCIATED PRESS
Benny Ivey, a former felon, holds a sign addressing voter suppression during a Poor People's Campaign assembly in downtown Jackson, Miss., Monday, April 19, 2021. Ivey was among speakers who called for an initiative to try simplify the way Mississippi restores voting rights to people convicted of some felonies, and other social issues. The Campaign seeks to have the issues addressed at a national assembly later this year. (AP Photo/Rogelio V. Solis)

JACKSON, Miss. (AP) — Three groups will sponsor an initiative to try to simplify the way Mississippi restores voting rights to people convicted of some felonies, a person involved with the effort said Monday.

Danyelle Holmes, a national organizer with the Mississippi Poor People's Campaign, said paperwork to begin a ballot initiative will be filed soon with the secretary of state's office.

The Mississippi Prison Reform Coalition and the People's Advocacy Institute will join the Poor People's Campaign as sponsors. Holmes said the proposal is to automatically restore voting rights to anyone who finishes serving a sentence, including probation, for a disenfranchising crime. She said people would not be required to pay any monetary penalties that are part of a sentence before getting back the right to vote.

The Rev. William Barber, national co-chairman of the Poor People’s Campaign, spoke Monday at a gathering in downtown Jackson and said restoring voting rights to people who have finished serving time is a moral imperative.

“We should not hold people captive beyond their sentence,” Barber said.

The Mississippi Constitution strips voting rights from people convicted of 10 felonies, including murder, forgery and bigamy. The attorney general issued an opinion in 2009 that expanded that list to 22 crimes, including timber larceny, carjacking, felony-level shoplifting and felony-level bad check writing.

To regain voting rights in Mississippi now, a person convicted of a disenfranchising crime must win permission from two-thirds of the state House and Senate. Legislators in recent years have passed a small number of bills to restore voting rights. Bills to restore suffrage to 28 people were filed this year. Two of those bills passed, and Republican Gov. Tate Reeves let both become law without his signature.

One of the people who regained suffrage this year is Debra Thomas of Jackson, who spoke at the event Monday. She said she was convicted of shoplifting when she was 20 and was sentenced to five years in prison.

“Since my conviction and release from prison, I have been denied access to low-income, subsidized housing,” said Thomas, who has 11 children. She said the conviction 18 years ago has made it difficult for her to find jobs other than housekeeping or working in chicken processing plants.

The voting restoration ballot initiative is the latest effort to try to prompt statewide elections on issues that have not gained traction in the Republican-controlled Mississippi Legislature. One recently announced ballot initiative would broaden the availability of early voting. Another would expand Medicaid.

It could be weeks before people begin gathering signatures on the voting rights restoration initiative petitions because the attorney general’s office must first write a ballot title and a ballot summary. The earliest it could be on the ballot is 2022.

In November 2018, Florida voters adopted a state constitutional amendment to automatically restore voting rights to most convicted felons once they complete their sentences, with the exception of those convicted of murder or sex offenses. It was estimated to affect more than 1 million people, although many voting rights advocates were outraged by a court ruling that later found that a Floridian's right could not be restored until all fines, restitution and legal fees were paid.

Federal lawsuits were filed in Mississippi in 2017 and 2018, seeking automatic restoration of voting rights for people who had finished serving sentences for disenfranchising crimes.

The Sentencing Project, a national advocacy group that seeks to eliminate racial disparities in the criminal justice system, said in a 2020 report that more 5 million people in the United States are disenfranchised because of criminal convictions. It said that includes more than 8% of adults in Alabama, Mississippi and Tennessee. The report also said Mississippi is one of seven states where more than one in seven Black people is disenfranchised, which is twice the national average.