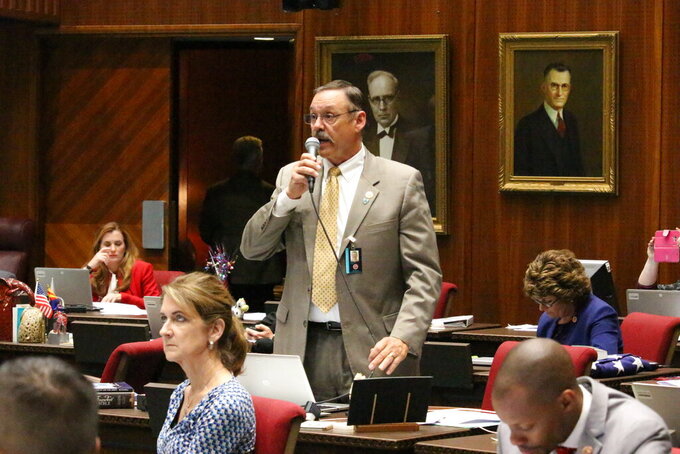 Bob Christie, ASSOCIATED PRESS
FILE - In this May 2, 2018, file photo, Republican Rep. Mark Finchem argues against an amendment to the state budget proposed by minority Democrats, at the Capitol in Phoenix. Former President Donald Trump is giving his influential endorsement to Finchem, who was at the Jan. 6 insurrection and worked to overturn Trump's 2020 loss. Trump's endorsement Monday, Sept. 13, 2021, of Tucson-area Finchem is likely to be crucial in the crowded in the Republican primary for Arizona's top election official. (AP Photo/Bob Christie, File)

PHOENIX (AP) — Former President Donald Trump put his mark on the race for Arizona’s top election official Monday, giving his influential endorsement to a state lawmaker who was at the Jan. 6 insurrection and worked to overturn Trump's 2020 loss.

Trump's endorsement of Tucson-area Rep. Mark Finchem is likely to be crucial in the crowded Republican primary for Arizona secretary of state. The seat is open as Democratic incumbent Katie Hobbs runs for governor.

Finchem brought Trump attorneys, including Rudy Giuliani, to Phoenix after the election to air bogus allegations that the former president's narrow loss in Arizona was marred by fraud. Though he's in the state House, he's been a mainstay in conservative media promoting Senate Republicans' partisan review of the 2020 vote count in Maricopa County, the state's most populous.

“He is a patriot who has fought for our Country right from his earliest moments in government,” Trump said in a statement of Finchem. “Mark was willing to say what few others had the courage to say.”

He called Finchem “a true warrior” and cited the lawmaker's promotion of Trump's discredited claims of election fraud. Trump also said Finchem is strong on crime, the border and gun rights “and loves our Military and our Vets.”

Democrats pushed unsuccessfully to expel Finchem from the House earlier this year after he was photographed outside the Capitol during the rally that turned violent as Trump supporters forced their way into the building, disrupting the certification of President Joe Biden's victory.

Finchem has said he was in the area to speak at a permitted rally, remained 500 yards (457 meters) away and didn't know the Capitol had been breached until hours later.

Trump is singularly popular in the GOP, and his endorsement carries considerable weight in a Republican primary.

Bolick introduced legislation that would allow the Legislature in future presidential elections to disregard voters and choose its own electors to represent Arizona in the Electoral College. Her bill was blocked by the Republican speaker and went nowhere, but nonetheless received national attention as an example of anti-democratic moves by elements of the GOP.

Ugenti-Rita has been one of the Arizona GOP's most active proponents of legislation imposing new restrictions on voting, drawing stiff opposition from Democrats who say her measures would disenfranchise people of color. She was booed at a Trump rally in Phoenix in July, and hours later came against the Senate's Maricopa County election review, which she said has been "botched."

After Trump endorsed Finchem, Ugenti-Rita said she's the only Republican who can win the general election.

“If we want to put a Republican in the Secretary of State's office, who can restore confidence and integrity in our elections and prevent fraud the choice is clear,” she wrote on Facebook.