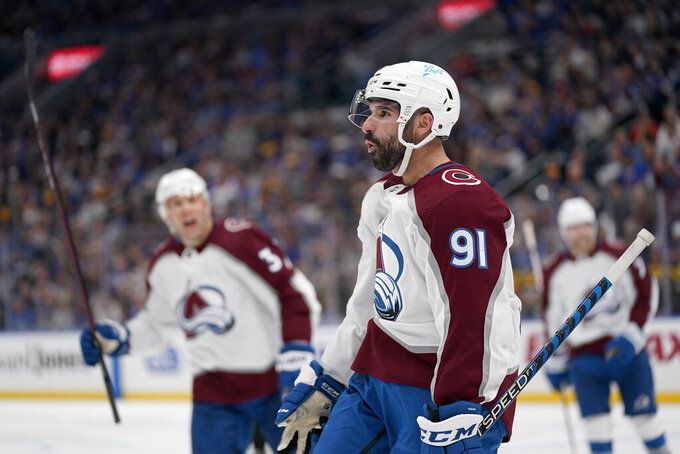 DENVER (AP) — Nazem Kadri held his hand near his ear to absorb the boos from St. Louis fans after one of his three goals. He nodded several times in their direction following another.

“Hey, I’ve got to rub it in,” the Colorado Avalanche forward said afterward.

By far the best player on the ice in Game 4, Kadri was fueled by disturbing threats he received that led to heightened security. He was also fueled by simply providing a lift for his team in a 6-3 win.

Kadri became the first Avalanche player to record a playoff hat trick on the road. His contributions helped Colorado take a 3-1 lead in the second-round series, with a chance to close out the Blues on Wednesday (8 p.m. EDT, TNT) in Denver.

The Avalanche are looking to advance to their first Western Conference Final since 2002, when Hall of Famers Joe Sakic, Rob Blake, Peter Forsberg and Patrick Roy played starring roles (they lost in seven games to Detroit).

Not that they let their minds wander to the possibility yet. Still work to be done.

“We’re just focused on the next shift, next period. We’re not looking ahead to the score or winning the series, whatever it might be," Colorado defenseman Bowen Byram said Tuesday as the team returned from St. Louis. “Our focus is just right now preparing to play and then once we get in the game, just next-shift mentality.”

Kadri was praised by his teammates for his ability to stay composed in the wake of the racist death threats that led the team to work with local law enforcement to investigate.

He was lauded for keeping his cool when the Blues got chippy, too. In the second period, Pavel Buchnevich was called for roughing on Kadri and David Perron for cross-checking ( Perron was fined $5,000 for the play by the league Tuesday ).

Kadri didn't retaliate and it set up a 5-on-3 power play for Colorado, with Kadri scoring right after the penalties expired to make it a three-goal game.

“Lose your cool and we’ll make you pay,” Kadri said.

Kadri has drawn the ire of Blues fans for a second straight postseason. It stems from his hit to the head of defenseman Justin Faulk in Game 2 a year ago, leading to Kadri's eight-game suspension.

The animosity only increased after Game 3 of this series, when he and St. Louis defenseman Calle Rosen collided and Kadri ended up in the lap of goaltender Jordan Binnington. It knocked Binnington out of the game — and the series — with a lower-body injury.

In the aftermath, Kadri received death threats and racial slurs. Some of the hateful comments were shared on Instagram through the account dedicated to the Kadri family cat, Jazzy. The NHL Players' Association condemned the attacks Tuesday.

“People need to be aware that this stuff still happens,” said Kadri, who is of Lebanese descent. “It’s hurtful. I know a lot of people might not have to deal with that and they might not understand what it feels like, but people are trying, which I appreciate.

“At the end of the day, I’m a good hockey player and try to provide for my team and try to put all of that aside.”

Kadri put aside the threats and the bad blood to raise his game to another level. He's the eighth different player in Colorado/Quebec history to notch a postseason hat trick.

“The way he played last night, he showed how strong he is,” said Avalanche forward Mikko Rantanen, who scored his first goal of the 2022 playoffs on an empty-netter with a few ticks left on the clock. “Great player.”

The Blues now go into regroup mode. They’re 2-12 overall in a best-of-seven series when trailing 3-1.

For Kadri, the game will remain a performance to cherish.

“I wanted to come out and really put a mark on this game," Kadri said. "I tried to do that as best as possible. It felt amazing, especially on the road. It was pure.”