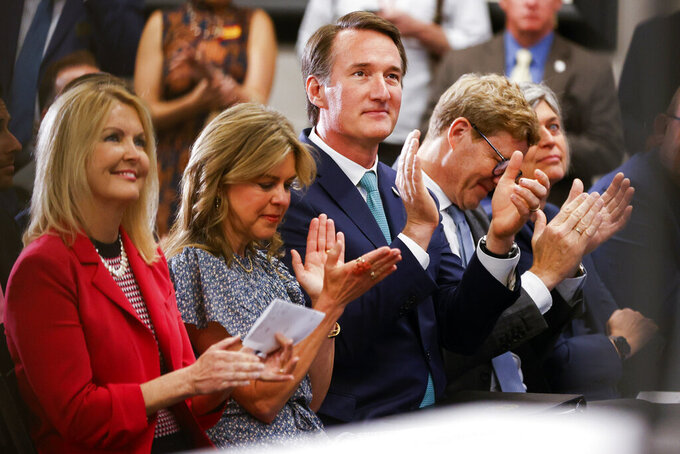 Shaban Athuman, ASSOCIATED PRESS
Virginia Gov. Glenn Youngkin applauds as Chesterfield Board of Supervisor Christopher Winslow speaks during a news conference at the Science Museum of Virginia with the Lego Group, Wednesday, June 15, 2022 in Richmond, Va. The Danish toy company said Wednesday it plans to invest more than $1 billion over 10 years to build a new factory in Virginia and to enlarge an existing factory in Mexico. (Shaban Athuman/Richmond Times-Dispatch via AP)

RICHMOND, Va. (AP) — Virginia Gov. Glenn Youngkin is seeking several dozen changes to the budget legislation lawmakers sent him earlier this month, including an amendment that would suspend the state tax on gasoline for three months.

Youngkin also wants to provide financial assistance to the families of two police officers killed at a private college earlier this year and boost security at historically Black colleges and universities. He’s seeking to limit the use of earned-sentence credits that allow inmates to reduce their time behind bars. And following protests outside the Virginia homes of some U.S. Supreme Court justices, he wants to create a new felony penalty for certain actions during demonstrations.

“I approve the general purpose of this bill, but I am returning it without my signature with the request that thirty-five amendments be adopted,” Youngkin wrote in a statement attached to the legislation. “My amendments primarily focus on expanding opportunities for education, keeping our communities safe, and making Virginia the best state for business.”

The governor's propsals were made public Wednesday evening. A divided General Assembly will consider them when they convene Friday.

Youngkin is also seeking three amendments to the so-called “caboose” budget that makes largely technical adjustments to the current spending plan. The others are attached to the biennial budget that would take effect July 1.

The governor, who did not veto any portion of the legislation, wrote in his statement that he hoped both chambers would find the proposals acceptable, so the budget could simply be approved without returning to his desk. Neither the Senate Democratic caucus nor House Republican caucus had any immediate comment.

This year's budget process has dragged on longer than in recent years as House and Senate leaders ran down the clock on their regular session without reaching an agreement on the spending plan and a handful of other issues. Negotiators worked privately for about two months on a compromise, which the General Assembly adopted June 1.

That plan would enact a range of tax cuts intended to help families struggling with soaring inflation, including one-time rebates, an increase in the standard deduction and elimination of the state's portion of the sales tax on groceries and personal hygiene items. Youngkin's proposed amendments would not impact those tax cuts, which he supported.

The Republican governor has long argued for gas tax relief, saying Virginia motorists need a break. The average cost per gallon in the state approaching $5, according to AAA. But Democrats in the General Assembly have argued the proposal would drain transportation funding without any guarantee that consumers see much of the savings.

Under his proposed amendment, the approximately 26-cent-per-gallon tax would be temporarily suspended from July 1 through Sept. 30. The amendment also includes language to cap future gas tax increases.

The governor's amendment to the earned-sentence credit portion of the budget would make changes to the types of offense classifications that are eligible.

Youngkin also offered an amendment that would expand the type of institutes of higher education that can partner with K-12 systems on so-called " lab schools '' the administration says will help foster innovation in education.

His proposal dealing with protests has a companion amendment providing the Department of Corrections funding for the potential increase in prison bed space associated with creating a new felony.

"I am asking that the General Assembly help keep our state and federal judges safe," he said in a news release.

Among the governor's other proposed amendments:

— $229,570 in each year to add two support positions to the office of Lt. Gov. Winsome Earle-Sears, plus $500,000 in funding for supplemental security for the lieutenant governor and attorney general's offices.

— language requiring each public university and community college to submit an annual report on "freedom of expression and inquiry, free speech, academic freedom, and diversity of thought to the Secretary of Education, including related incidents and statistics from the prior academic year.”