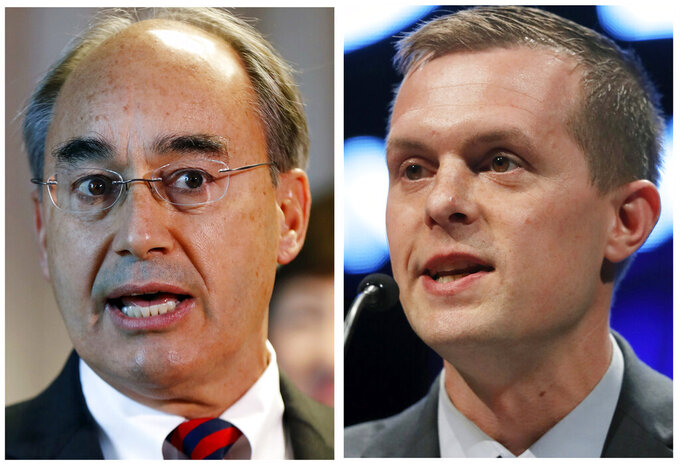 “It cannot continue,” he said of the Democratic leadership in Washington, D.C.

Golden's campaign manager said the incumbent continues to work hard in Washington, noting he's been involved in fighting for jobs at Bath Iron Works and laying the groundwork for an infrastructure deal. But Golden will be ready if Poliquin wins his party's nomination, Margaret Reynolds said.

“Mainers also know Bruce Poliquin. He’s still the guy voters rejected in 2018. Nothing has changed about him since then, and if he receives the GOP nomination, Jared will look forward to the rematch,” Reynolds said.

The announcement potentially sets up a big-dollar fight in the state's sprawling, largely rural 2nd Congressional District. But first Poliquin would have to win a primary race against two lesser-known Republican candidates, state Sen. Trey Stewart of Presque Isle and state Rep. Michael Perkins of Oakland.

Golden, from Lewiston, unseated Poliquin thanks to the state's ranked-choice voting in 2018. At the time, the race was the most expensive in Maine history with more than $20 million spent by candidates and outside groups.

Poliquin had the most first-round votes, but his lead didn’t hold up after an additional round under ranked-choice voting.

Golden emerged victorious after two trailing candidates were eliminated and their supporters’ second-choices were reallocated.

Poliquin, who lost a lawsuit over the election outcome, sat out the 2020 election, citing “family priorities” and the need to care for his elderly parents. He said that they're “safe, stable, and well cared for.” In fact, he said his 91-year-old dad encouraged him to run.

It's expected to be a tough contest.

Golden's vote in Congress have shown that he's willing to part ways with the liberal leadership of House Speaker Nancy Pelosi, and he won reelection in 2020 even though Republican President Donald Trump grabbed the most votes in the district.

“Our country has serious problems and it’s getting worse because liberal politicians with extreme beliefs are making policy decisions that hurt families and our small business job creators here in Maine,” he said.