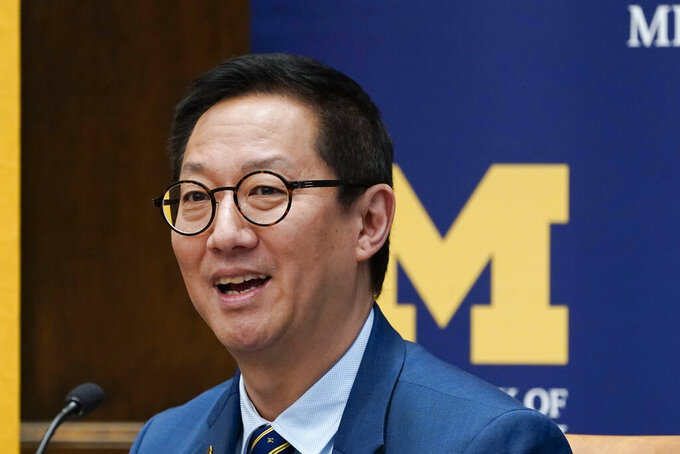 Carlos Osorio, ASSOCIATED PRESS
Santa Ono is introduced as the new president of the University of Michigan, Wednesday, July 13, 2022, in Ann Arbor, Mich. Ono becomes UM's 15th president and its first minority and Asian chief executive — the son of Japanese immigrants who came to the United States after World War II. The 59-year-old Ono has led the University of British Columbia for nearly six years after guiding the University of Cincinnati for four years. (AP Photo/Carlos Osorio)

ANN ARBOR, Mich. (AP) — The University of Michigan on Wednesday named Santa Ono, president and vice chancellor of the University of British Columbia, to lead the university after its former president was fired in disgrace and it resolved a sexual assault scandal with a near half-a billion-dollar settlement.

Ono has led the Canadian school since 2016. Before that, he served as president of the University of Cincinnati and senior vice provost and deputy to the provost at Emory University in Georgia.

“I live to serve, and I believe in leading by example,” Ono said. “I will give 150% to the University of Michigan. As of today, I am proud to be a Michigan Wolverine.”

Ono takes over from Mary Sue Coleman, who is the Ann Arbor school’s interim president. His appointment was approved Wednesday in a unanimous vote by the eight-member board of regents. He is the university’s 15th president and was met with a standing ovation by the regents and those in attendance.

Former President Mark Schlissel was removed earlier this year after emails were discovered detailing an alleged inappropriate relationship between him and a subordinate.

The board of regents then appointed Coleman, whom Schlissel succeeded as president in 2014.

The university has been rocked by allegations that surfaced in 2020 by hundreds of men who said they were sexually assaulted by the late Robert Anderson, a campus doctor who spent nearly 40 years at Michigan. He died in 2008. In January, the school announced a $490 million settlement with Anderson’s accusers.

Separately, Michigan reached an agreement to settle a lawsuit brought by students who sought to force changes in how the school protects the campus from sexual misconduct.

And the university paid $9.25 million to eight women who reported emotional or sexual abuse by Martin Philbert, who over 25 years rose from professor to provost, Michigan’s senior academic official. He was removed in 2020.

Ono, during a question-and-answer session with reporters, said he takes student safety very seriously and that at the University of British Columbia, he is “the final word in terms of discipline in these kinds of cases."

“I have a lot of direct experience in the damage that these sorts of things, sexual assault and harassment, have on young men and women,” Ono said. “And so, it’s unacceptable.”

Ono is a prolific tweeter and an enthusiastic cheerleader for his schools.

At Cincinnati, he tossed out T-shirts at football games and surprised freshmen by helping them move into their dorms. And he used Twitter to provide updates on everything from how the school fared in a ranking of U.S. colleges to the score of a rugby match.

“You’ll learn that I was one of the early presidents to embrace social media. Back then, it was Twitter, but there’s so much more now,” Ono said. “If you want to interact with the students, they’re on Instagram. There’s also this thing called TikTok, but I’m not brave enough to go on there yet.”

Regent Mark Bernstein said it was important to the regents that the new appointment appreciates the school’s sporting prowess.

“Athletics is the front porch of our university. Any successful Michigan president needs to appreciate this fact,” Bernstein told The Associated Press. “Santa Ono has a sober enthusiasm for big-time athletics. He fully understands challenges and opportunities of college athletics.”

Ono, who was born in Vancouver, British Columbia, holds a biology degree from the University of Chicago and a doctorate in experimental medicine from McGill University. His research focus is the immune system, eye inflammation and age-related macular degeneration. Ono was a professor of pediatrics at Cincinnati Children’s Hospital Medical Center.

Ono, also an accomplished cellist, is the son of a Japanese-born professor who taught math at the University of British Columbia in the 1960s. He grew up in the U.S. and holds American and Canadian citizenship.

Ono is married to Wendy Yip, who trained as an immunologist at McGill and as a lawyer at Boston University. They have two daughters.