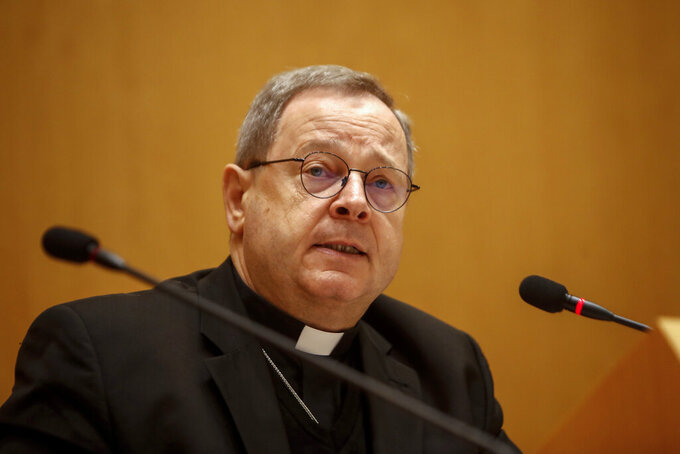 Riccardo De Luca, ASSOCIATED PRESS
Monsignor Georg Baetzing, head of the German Bishops' Conference, attends a press conference at the end of a 6-day visit of German bishops to the Vatican, including an audience with Pope Francis, in Rome, Saturday, Nov. 19, 2022. Top Vatican cardinals tried to put the brakes on the German Catholic Church's controversial reform process Friday, fearing proposals concerning gays, women and sexual morals will split the church and insisting they would be better debated later. (AP Photo/Riccardo De Luca)

VATICAN CITY (AP) — Germany’s Catholic bishops insisted Saturday that their reform process won’t lead to a schism and vowed to see it through, after tense meetings with Vatican officials who want a moratorium on proposals to ordain women, bless same-sex unions and rethink church teaching on sexuality.

The head of the German bishops' conference, Bishop Georg Baetzing, briefed reporters on the weeklong series of meetings he and 60 other German bishops had with Pope Francis and the heads of the Vatican's main offices. The periodic once-every-five-year visit took on far greater import this time given the demands for change and reform among Germany's rank-and-file Catholics following the German church's reckoning with decades of clergy sexual abuse and cover-ups.

Summarizing the German position, Baetzing said the German church would not make decisions that were the Vatican's to make, and said outsiders who fuel fears of the reform process leading to a separation from Rome were ignorant of what actually was getting debated.

“We are Catholic,” Baetzing said at a news conference. “But we want to be Catholic in a different way.”

The church hierarchy in Germany and the country’s influential lay Catholic group launched the reforms after a 2018 report found that thousands of abuse crimes were systematically covered up by German church leaders. It found that structural power issues in the church “favored sexual abuse of minors or made preventing it more difficult.”

Preliminary assemblies of the reform process, known as the Synodal Path, have sought to address how power and authority are exercised in the church. During these meetings, lay representatives and German bishops have approved calls to allow blessings for same-sex couples, married priests and the ordination of women as deacons, though the proposals must be further debated and approved for them to be enacted.

Conservative Catholics have criticized the moves and warned the German reforms, if approved, could lead to schism.

Baetzing assured the Vatican that the German church would “not make any decisions that would only be possible in the context of the universal church,” such as changes to the church’s core doctrine.

“However, the church in Germany wants to and must provide answers to the questions being asked by the faithful,” he said.

The main lay Catholic group involved in the reforms, the Central Committee of German Catholics, said the meeting made it clear that the German church was right to pursue the dialogue in Germany because "“it is not a solution to see the responsibility for the reform process solely in Rome.”

The president of the group, Irme Stetter-Karp, took issue with the joint statement issued by the Vatican and German bishops, which urged the faithful to be patient.

A “patient people of God” no longer exists, she said.

One proposal to emerge, after the Vatican unsuccessfully sought a moratorium on the German process, calls for involving Germany lay representatives in round-table talks with Vatican officials as the process continues, Baetzing said.

The German lay group We Are Church said Saturday that it was fortunate the idea of a moratorium, floated by some Vatican and German bishops, was averted.

“But the bishops as well as the Catholics in Germany still have to wait for a clear word of appreciation of the German Synodal Way,” the group said.

One matter that was discussed, but not resolved, concerns the fate of Cologne Cardinal Rainer Maria Woelki, a deeply divisive figure in Germany who has faced strong criticism for his handling of sexual abuse cases.

Francis gave Woelki, 66, a “spiritual timeout” last year but has not acted on the cardinal's offer to resign, which was submitted in March.

Baetzing said the Woelki case was raised several times, including with Francis, with the German bishops telling the pope the status quo was “unbearable for both the archbishop and the faithful” and that a decision must be taken.

Francis met individually with the bishops on Thursday and was expected to join a summit meeting Friday between the bishops and the heads of top Vatican offices. Francis failed to show up at the Friday meeting, leaving it to the Vatican hierarchs to speak.

Baetzing suggested the pope's absence might have been the work of a “clever Jesuit.” Francis had made clear a day earlier that he was comfortable living with a certain “tension” as the German reform process plays out, even if members of the Vatican bureaucracy were not.

Francis has initiated a global reform discussion that is taking place out alongside the German one but is a few steps behind.