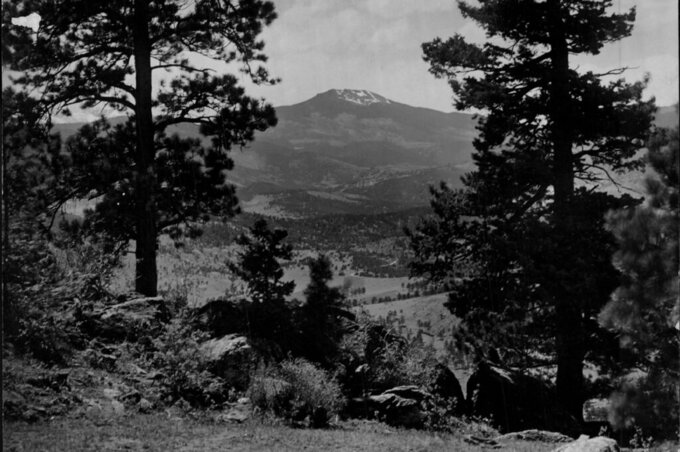 uncredited, ASSOCIATED PRESS
Squaw Mountain is shown framed in evergreens on July 27, 1927, in Colorado. A Colorado state panel has recommended on Thursday, Sept. 16, 2021, that a peak west of Denver, Squaw Mountain be renamed to Mestaa’ėhehe Mountain after a Cheyenne woman who facilitated relations between white settlers and Native American tribes in the early 19th century. The recommendation comes amid national efforts to address a history of colonialism and oppression against Native Americans and other people of color. (The Denver Post via AP)

DENVER (AP) — A Colorado state panel has recommended that a mountain peak west of Denver be renamed in honor of a Native American woman who acted as a translator for tribes and white settlers in the 19th century.

Thursday's recommendation comes amid national efforts to address a history of colonialism and oppression against Native Americans and other people of color after last summer's protests calling for racial justice reform. It is the first of several name changes being considered by the state panel.

The Colorado Geographic Naming Advisory Board recommended changing the name of Squaw Mountain, located in Clear Creek County about 30 miles (48 kilometers) miles west of Denver, to Mestaa’ėhehe Mountain, which is pronounced “mess-taw-hay.”

The name honors an influential Cheyenne translator known as Owl Woman, who facilitated relations between white settlers and Native American tribes in the early 1800s, The Colorado Sun reported.

The word “squaw,” derived from the Algonquin language, may once have simply meant “woman.” But over generations, the word morphed into a misogynist and racist term to disparage Indigenous women, according to experts.

In a similar fashion, the Squaw Valley Ski Resort in California, owned by Denver’s Alterra Mountain Co., announced Monday that the new name would be Palisades Tahoe. The resort is in Olympic Valley, which was known as Squaw Valley until it hosted the 1960 Winter Olympics. Tribes in the region had been asking the resort for a name change for decades.

The Lake Tahoe area valley is about 200 miles (321.87 kilometers) northeast of San Francisco and is within the ancestral homeland of the Washoe people, according to Darrel Cruz of the Washoe Tribe Historic Preservation Office. Washoe Tribal Chairman Serrell Smokey said the tribal council expressed its appreciation for the name change and that they plan to work with officials to rename other places in the Olympic Valley that continue to use the derogatory word.

The Denver-based company said it is partnering with the Washoe Tribe to educate resort guests about tribal culture, which will include an exhibit on the Washoe way of life.

Colorado Democratic Gov. Jared Polis had revived the state's 15-member panel in July 2020 to make recommendations that he will review and forward to the federal group. The mountain is among 13 locations throughout Colorado for which residents have requested name changes.

One of the other geographic areas under review by the state board is Mount Evans, which is named after Colorado’s second territorial governor, who resigned after the U.S. cavalry massacre of nearly 200 Arapaho and Cheyenne tribal members at Sand Creek in 1864.

Other locations on the board’s list of possible name changes include Chinaman Gulch in Chaffee County, just over 100 miles (160.93 kilometers) west of Colorado Springs and a mesa and creek in Delta County in western Colorado, named by Mexican settlers for the color black.