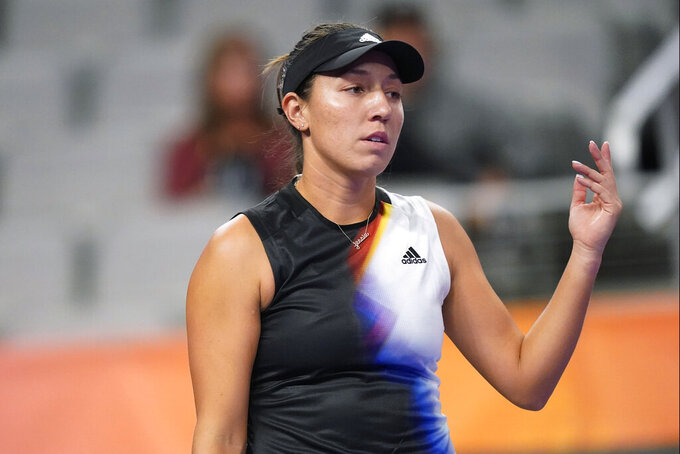 LM Otero, ASSOCIATED PRESS
Jessica Pegula, of the United States, reacts to losing a point to Aryna Sabalenka, of Belarus, during round-robin play on Day 5 of the WTA Finals tennis tournament in Fort Worth, Texas, Friday, Nov. 4, 2022. (AP Photo/LM Otero)

FORT WORTH, Texas (AP) — Jessica Pegula dropped her head to the table in front of the microphone, smiling while hoping there might be just one victory awaiting the American in her WTA Finals debut.

She couldn't even get a consolation prize.

The Buffalo native was New York honest about going winless in all three singles matches, capped by a 6-3, 7-5 round-robin loss to Aryna Sabalenka on Friday before a loss in her final doubles match that night with fellow American Coco Gauff left her 0 for 6.

Pegula also tried to remember the strong season that got her to Texas with a No. 3 ranking, and made her and Gauff the first Americans to debut at the WTA Finals in singles and doubles since Lindsay Davenport in 1994.

“I keep telling myself I had such a great year, but that’s the tough thing with tennis is you end the year really well and then I come here and I lose all my matches,” the 28-year-old said. “I mean, I don’t think I’ve lost this many matches in a short amount of time, this is like the same amount in like three months or something, almost?”

No. 7 Sabalenka finished 2-1 in group play and advanced to the semifinals when fifth-ranked Maria Sakkari won the first set of the late match against Ons Jabeur, eliminating the No. 2 player. Sakkari, who went on to a 6-2, 6-3 victory, had already qualified for the semis.

Sabalenka, who didn’t qualify for the semifinals in her WTA Finals debut last year in Guadalajara, knew a straight-sets victory improved her chances of advancing.

The 24-year-old got it — and a fourth consecutive straight-sets win over Pegula — despite double-faulting three times serving for the match at 5-3. She did the same thing earlier in the second set.

Pegula had a chance to force a tiebreaker on her serve, but Sabalenka finished her off with a backhand crosscourt winner on her second match point.

“I kept telling myself just stay focused, just keep fighting,” Sabalenka said. “It doesn’t matter, two or three sets. Just keep fighting. Just get the win, get extra points and then move on.”

The hard-hitting Sabalenka never trailed in overpowering Pegula from the start, finishing with a 26-13 edge in winners and five aces.

Even with her attacking style, Sabalenka had fewer unforced errors, finishing with 23 to 26 for Pegula, who mumbled to herself after many of hers.

“I feel like this week was a little bit of a grind,” Pegula said. “It definitely feels like I hit a wall a little bit today, just as far as physically, mentally.”

Pegula qualified for the WTA Finals on the indoor hard-court at Dickies Arena by reaching the semifinals in San Diego. Then a week before showing up, she got her first title of the season — and second of her career — by beating Sakkari in Guadalajara.

While saying she underestimated the difficulty of playing singles and doubles this week, Pegula didn't regret it. She and Gauff, already eliminated, were blown out in their finale 6-2, 6-1 by Barbora Krejcikova and Katerina Siniakova. The Czech duo was already in the semifinals and finished 3-0 in group play.

Gauff also is out of contention in singles with an 0-2 record, the No. 4 player set to wrap up against top-ranked Iga Swiatek in the final singles match of group play Saturday night.

“We’re used to playing both,” Pegula said. “But obviously this week, I think maybe the end of the year, it just kind of caught up, I don’t know about her, but it caught up to me a little bit.”

American Desirae Krawczyk and Demi Schuurs of the Netherlands advanced to the semifinals in doubles with a 7-6(2), 6-3 victory over China’s Xu Yifan and Yang Zhaoxuan.

Sakkari took a 5-1 lead in the first set against Jabeur and was never threatened in her third victory over a top 10 player this week — all in straight sets — after coming in with just one all season.

“It was higher than the rest of the season, for sure,” Sakkari said of her confidence coming in. “But it wasn’t ultra high that I was feeling, like, unstoppable or anything. I was feeling good with my game.”

Sabalenka didn't qualify for the season-ending event until the last week of the regular season in Guadalajara, and was two points from defeat in her opener before rallying to beat Jabeur, a U.S. Open finalist this year.

“That’s what I was thinking about, that no matter what happens, just win another match,” said Sabalenka, who has won nine of her 10 career titles on hard courts. “Just do it for the future. Even if I’m not gonna get through this group, I’ll take positive things from this one.”

She gets to play for more now.