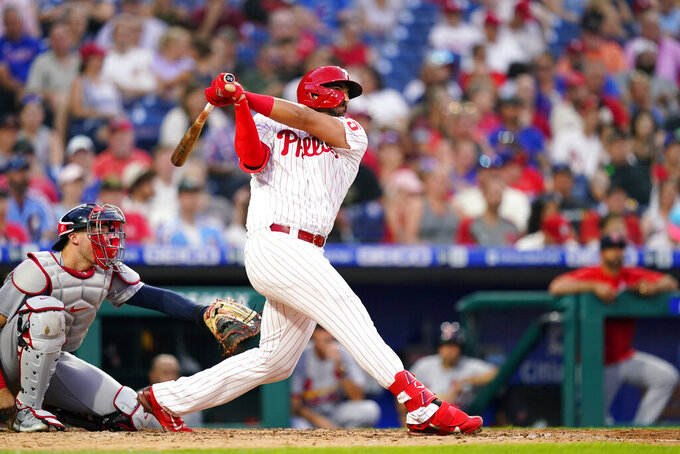 PHILADELPHIA (AP) — Darick Hall’s tiebreaking home run was his third homer since being called up, and Rhys Hoskins went deep to add an insurance run, leading the Philadelphia Phillies to a 5-3 win over Nolan Arenado and the St. Louis Cardinals on Friday night.

Hall broke a 3-all tie in the sixth when he led off by driving a 79-mph changeup from Miles Mikolas (5-6) into the seats in right. All three of Hall’s hits have been home runs since his arrival from Triple-A Lehigh Valley on Wednesday.

“To be able to come up and perform and help the team is everything,” Hall said.

The 26-year-old Hall went deep twice in Philadelphia’s 14-4 victory over the Atlanta Braves on Thursday night.

“He’s got to be on top of the world right now,” Hoskins said.

Arenado hit for the cycle for the second time in his career and 17th time in Cardinals history. He had an RBI triple in the first, a two-run homer in the third, doubled in the sixth and was credited with a single in the eighth after his hard-hit grounder caromed off third baseman Matt Vierling’s glove.

“It hasn’t hit me yet because the game didn’t turn out the way we wanted,” Arenado said. “Obviously it’s a rare thing, a special thing. I just thank God I was able to do it today.”

Hoskins gave Philadelphia a two-run cushion in the seventh by homering in his third straight game, a solo shot to deep left-center.

“We got contributions from all over the yard,” Hoskins said. “Pretty cool win. It’s nice to get a win to start the series.”

Mickey Moniak added an RBI double for Philadelphia, which will play six of its next nine games against St. Louis.

The Phillies are 19-8 since interim manager Rob Thomson took over for the fired Joe Girardi last month.

José Alvarado (2-1) pitched two-thirds scoreless innings in relief for the victory, and Brad Hand tossed a scoreless ninth for his third save in four chances.

“They have some swing-and-miss (pitchers) in that bullpen,” Cardinals manager Oliver Marmol said. “Tough night.”

The Phillies took advantage of an error by Arenado in the fifth when they tied the game with three runs. Garrett Stubbs led off with a hard-hit grounder to third base, but it went off the glove of Arenado and Stubbs reached first. After Vierling’s single, Moniak doubled to the wall in right-center to score Stubbs. Vierling and Moniak went on to score on Kyle Schwarber’s groundout and Hoskins’ sacrifice fly.

“They capitalized on it, for sure,” Marmol said.

Mikolas left after 5 ⅓ innings, with two of his four runs allowed earned on six hits with a strikeout and two walks.

“Obviously, he’d rather have the win,” Marmol said. “It’s still special to do that. It’s hard to come by.”

The Phillies successfully challenged two calls. In the first, Philadelphia’s Nick Castellanos originally was called out on a tag play while running from first to second, but was ruled safe at second after a video review. In the seventh, Cardinals’ Tommy Edman was deemed out on a pickoff play after a video review overturned the safe call on the field.

The Phillies presented Albert Pujols with the visiting scoreboard “STL” sign in appreciation of his 22-year career. Pujols, who entered with 683 home runs, announced in March that he would be retiring after this season. He went 0 for 3 with two strikeouts.

“It was pretty awesome,” Pujols said. “It was really nice by the Phillies to honor me like this. It was really special.”

Braves: After missing the last two games with a bruised left hand, 2B Nolan Gorman was available on Friday but was not in the starting lineup due to the pitching matchup, Marmol said before the game. … LHP Steven Matz (left shoulder impingement) will make a rehab start at Triple-A Memphis on Saturday and is targeting three innings and 45 pitches. Matz left his May 22 start after feeling shoulder discomfort. … OF Tyler O’Neill (left hamstring strain) missed his 11th game in a row. He is running and is targeting Monday for a rehab assignment, Marmol said.

Phillies: Star slugger Bryce Harper missed his fifth straight contest following successful surgery on his broken left thumb on Wednesday. Harper was not with the club on Friday, but is expected to rejoin the team soon. ... Eflin received a cortisone shot earlier this week and is expected to miss at least one more start.