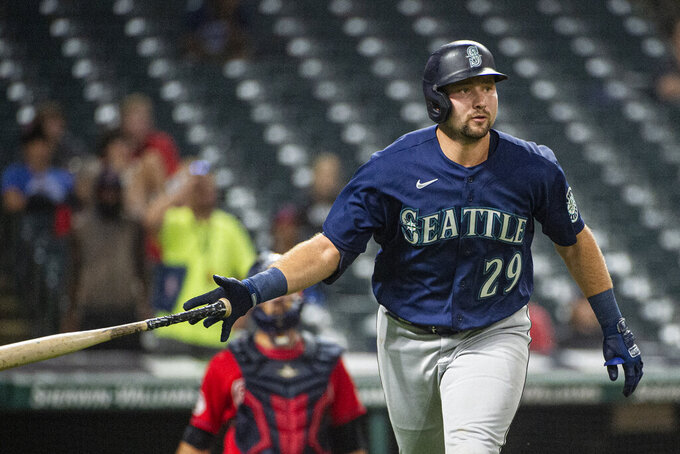 CLEVELAND (AP) — J.P. Crawford singled in the go-ahead run in the 11th inning, Cal Raleigh added a two-run homer and the Seattle Mariners beat the slumping Cleveland Guardians 6-3 Sunday for their seventh straight win in a game that was delayed by rain for 4 hours, 33 minutes.

Mariners manager Scott Servais was able to smile after the marathon finally ended.

“What a long day," he said. "You sit here for about a four-hour delay. You don’t know what’s going to happen, how guys are going to respond. Give the Guardians a ton of credit. Obviously, they’re fighting for a playoff spot as well.”

With one out, Crawford broke a 3-for-24 skid by bouncing a single past Trevor Stephan (4-4) and into center field to score Eugenio Suárez, who began the 11th as the automatic runner. Raleigh, who homered twice on Friday, followed by belting a 2-2 pitch to right for his 22nd homer.

Matthew Boyd (1-0) worked out of a bases-loaded jam in the 10th and Chris Flexen pitched the 11th for his second save of the season as the Mariners completed a three-game sweep.

“Pitched all nine guys out of the bullpen,” Servais said. “We needed every one of them. We finally got some big hits at the end with J.P. stepping up and the big homer by Cal.”

The Mariners had one last bit of drama as they left town. The team had to pack up quickly and get to the airport before its charter flight was grounded for the night.

Cleveland’s struggling offense tied the score in the eighth on rookie Oscar Gonzalez’s single. Amed Rosario flied out to deep right with the winning run on third to end the ninth.

“It’s hard on everybody,” Guardians manager Terry Francona. "The umpires were great. Everybody communicated, that was outstanding. I wanted to play the game through, didn’t just want to go out and try to get five. It stings at the end, but we fought back. Our pitching’s probably not in the greatest shape for (Monday), but I still think the way we fought will serve us well.”

The teams consulted with Major League Baseball throughout the break. With both clubs in playoff contention and not a lot of good travel logistics in the final month of the regular season, the decision was made to wait out the rain.

Seattle’s rookie star Julio Rodríguez hit his 23rd home run of the season in the third, a solo blast off starter Cal Quantrill. Ty France had an RBI single in the first. Mitch Haniger scored on Crawford's double-play grounder in the fourth to make it 3-1

Mariners right-hander George Kirby, the AL Rookie of the Month for August, gave up one run and three hits in three innings.

The Mariners, who hold one of the AL’s three wild-card spots, have won 14 of 18. Seattle won all six games its road trip to Detroit and Cleveland.

The Guardians’ loss dropped them into a tie with Minnesota for first place in the AL Central. Josh Naylor had an RBI double in the first and Austin Hedges drove in a run with an infield hit in the seventh.

Seattle’s Adam Frazier was batting with runners on first and second when the umpires called for the tarp in the top of the fourth. The game began in a steady rain, which became a downpour while Frazier was batting. Seattle led 2-1 at the time of the delay.

The grounds crew made a brief appearance around 6:30 p.m. to drag the tarp into right field and dump the water into the outfield. The infield and mound were worked on before the tarp was put back on the infield. Servais and Francona met briefly near the mound before returning to their dugouts.

An announcement was put on the scoreboard telling fans that more rain was approaching and a decision would be made after those showers passed through the area. The game resumed in front of a small crowd, which cheered at literally everything that happened once the players took the field.

Both teams wanted to play a nine-inning game. Had they not resumed and the game been suspended, the Mariners would’ve needed to return to Cleveland after completing a series in Kansas City on Sept. 26, finish play against the Guardians and then host Texas the next day.

Guardians: RHP Triston McKenzie (9-11, 3.18 ERA) will pitch the opener of a three-game series in Kansas City on Monday. He has lost his last two starts and was 2-4 in August.