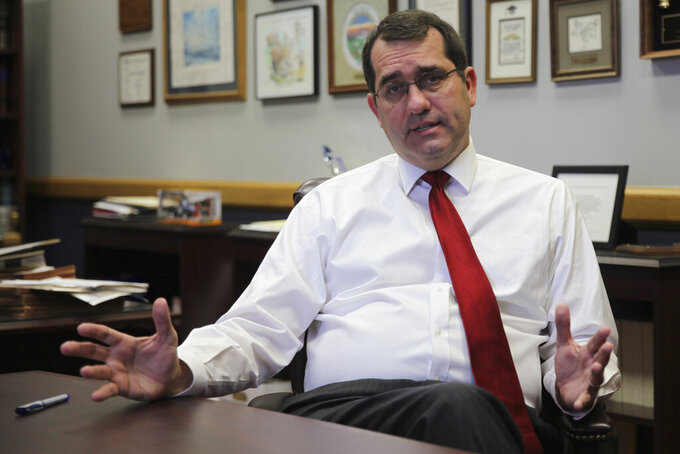 John Hanna, ASSOCIATED PRESS
Kansas Attorney General Derek Schmidt discusses a legal settlement of nearly $27.6 million with Centene Corp., of St. Louis, during an interview, Monday, Dec. 6, 2021, in his office in Topeka, Kan. Centene manages prescription drug costs for the Kansas Medicaid program and faced questions about whether it was overcharging the state. (AP Photo/John Hanna)

TOPEKA, Kan. (AP) — Kansas will receive nearly $27.6 million from a legal settlement with the company that manages prescription costs for its Medicaid program, after an investigation into whether the company had overcharged the state, Attorney General Derek Schmidt announced Monday.

The settlement with St. Louis-based Centene Corp. comes after a nearly two-year investigation by Schmidt's office and a Jackson, Mississippi-area law firm it hired to review Centene's practices. States throughout the country have been investigating companies known as pharmacy benefit managers, and Mississippi and Ohio in June settled lawsuits against Centene for a total of nearly $144 million.

Kansas settled with Centene before filing its lawsuit. Schmidt said a key concern was whether Centene negotiated discounts with drug companies and failed to notify Kansas or pass along the savings.

“Kansas was not in a position to detect that through ordinary financial reviews because the company wasn’t providing sufficiently detailed data," Schmidt told The Associated Press.

The company denied any wrongdoing as part of the settlement, and a spokesperson described it as a “no-fault agreement" that "reflects the significance we place on addressing their concerns.”

Prescriptions cost the Kansas Medicaid program more than $100 million per year after rebates from drug companies, according to the Kaiser Family Foundation. Schmidt's investigation covered Centene's actions since the start of 2016.

“We’re taking a hard look at whether there is similar behavior by other companies in other parts of state government,” Schmidt said, declining to provide details about other investigations.