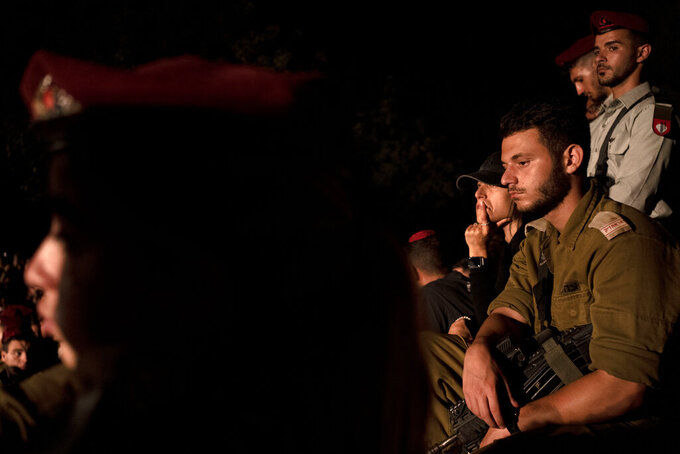 The overnight incident was the latest in a string of deadly clashes in recent months in the northern West Bank, where Israeli troops conduct nightly raids. Most of that fighting, including Wednesday’s, has taken place near the city of Jenin, which is known as a bastion of Palestinian militants.

The military said soldiers spotted the two militants approaching Israel’s separation barrier in the northern West Bank and that it dispatched forces to the area. It said the two suspects began shooting automatic weapons at troops, who returned fire.

The Israeli army said that Maj. Bar Falah, 30, was killed in the shootout.

The official Palestinian news agency Wafa reported that the Israeli army was holding the bodies of the two men. It identified them as Ahmad Abed, 23, and Abd al-Rahman Abed, 22, both from a village near Jenin.

The Israeli military confirmed that Ahmad Abed was a member of the Palestinian Authority security services, which coordinate with Israel in an uneasy alliance against their common foe, the Hamas militant group.

Late Wednesday, Israeli authorities said they were temporarily closing a pair of crossings into Israel, including the checkpoint where the shooting took place. They said they were also suspending Israeli entry and work permits for all residents of the attackers' hometown.

In a phone briefing with reporters, Barbara Leaf, the U.S. assistant secretary of state for Near Eastern Affairs, said the security conditions in the West Bank “concern us greatly.”

Israel has been carrying out nightly arrest raids in West Bank cities, towns and villages since a spate of attacks against Israelis in the spring killed 19 people.

Israeli fire has killed scores of Palestinians during that time, making it the deadliest year in the occupied territory since 2016.

The Israeli military says the vast majority of those killed were militants or stone-throwers who endangered the soldiers. But several civilians have also been killed during Israel’s monthslong operation, including a veteran journalist and a lawyer who apparently drove unwittingly into a battle zone. Local youths who took to the streets in response to the invasion of their neighborhoods have also been killed.

Israel says the arrest raids are meant to dismantle militant networks. The Palestinians say the operations are aimed at maintaining Israel’s 55-year military occupation of territories they want for an independent state.

Israel captured the West Bank, along with east Jerusalem and the Gaza Strip, in the 1967 Mideast war and the Palestinians seek those territories for a future state.