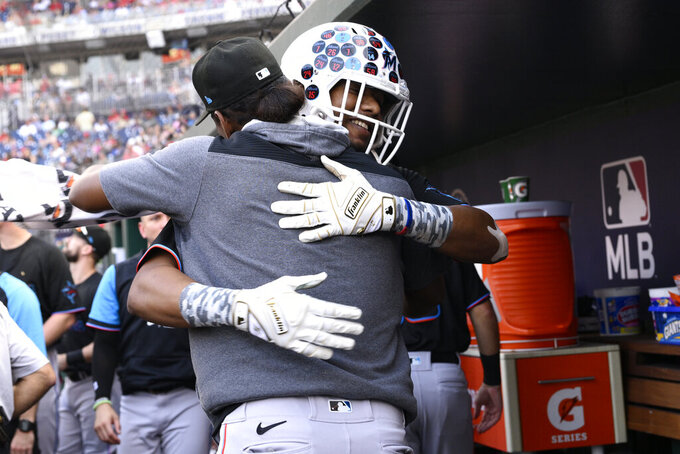 Nick Wass, ASSOCIATED PRESS
Miami Marlins' Jerar Encarnacion, back, celebrates his two-run home run in the dugout during the fourth inning of a baseball game against the Washington Nationals, Saturday, Sept. 17, 2022, in Washington. (AP Photo/Nick Wass)

WASHINGTON (AP) — Dave Martinez's Washington Nationals haven't won much in 2022. And when they have won, it has not been via deep shots: They entered Saturday last in the majors with a 50-94 record — and last in the NL with just 122 homers.

The manager's club did things differently this time. Lane Thomas got things started with a leadoff homer, and the Nationals ended up with four solo shots in a 5-3 victory over the Miami Marlins on Saturday.

After Thomas hit his 16th of the season off starter Trevor Rogers — who left in the second inning with back muscle discomfort — Luke Voit took Jeff Brigham (0-1) deep in the third for his 21st.

Victor Robles then broke a 3-all tie by connecting off Brigham in the fourth for his fifth homer this year, and Alex Call's fourth homer came against Cole Sulser in the fifth.

“Whenever you see the ball flying out of the yard, you’re feeling good as a team,” Call said. “It seemed like Luke’s ball was up in the air forever, and we were just like: ‘Go! Go! Go!’ And it got over."

Add in an RBI double by Riley Adams in the second off Rogers, and Washington scored one run in each of the first five innings en route to a 5-3 lead.

Hunter Harvey (2-1) pitched a 1-2-3 fifth and was credited with the win for Washington. He was followed by fellow relievers Erasmo Ramírez, Carl Edwards Jr. and Kyle Finnegan, who collected his 10th save in 14 chances.

Rogers faced only seven batters, and threw just 32 pitches, departing after giving up consecutive doubles to Luis García and Adams to begin the second.

“A lot of discomfort. There was just no power there. But didn’t really feel any pain, fortunately,” said Rogers, whose fastball velocity in the second inning was down much closer to 90 mph than it usually is.

He expects to have an MRI Sunday.

Mattingly said it probably is safe to assume Rogers won't make his next scheduled start. According to Mattingly, Rogers said felt something in his shoulder, but tests showed a problem with a lat muscle.

“I guess that’s a good thing — that he didn’t feel it on any one, certain pitch or anything like that,” Mattingly said. “Just feels really tight.”

Rogers has not won any of his past eight starts, dating to a victory against Washington on July 1, and came off the injured list on Aug. 31 after dealing with back spasms. He didn't think the issues were related.

“Got back to where I finally needed to be, able to compete and do it at a high level and do it consistently,” he said. “Now is another flare-up. Just very, very frustrating.”

Nationals starter Erick Fedde allowed three runs in four innings, including Jerar Encarnación's two-run shot in the fourth. It was Encarnación's third homer since making his MLB debut in June.

The already-eliminated Marlins have lost seven of their last nine games, including two in a row to the Nationals after entering this series 12-1 against Washington this season.

Nationals 2B García's second-inning double extended his on-base streak to 20 games, the longest current run in the majors.

NL Cy Young Award contender Sandy Alcantara is 12-8 with a 2.43 ERA across a majors-leading 203 2/3 innings this season for the Marlins heading into Sunday's series finale. The Nationals will start RHP Aníbal Sánchez (2-5, 4.09).