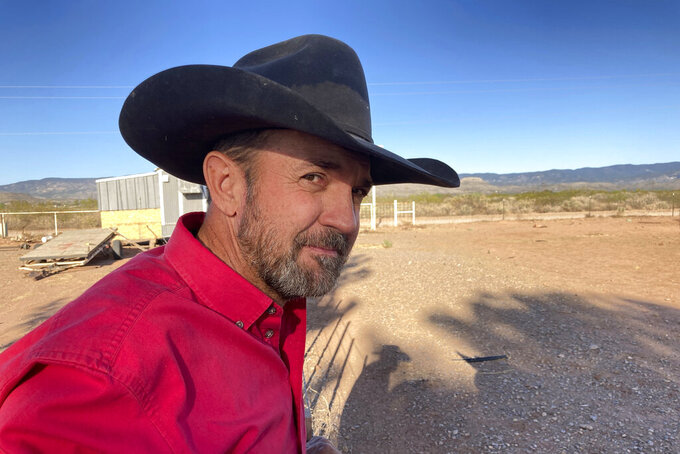 Morgan Lee, ASSOCIATED PRESS
FILE - Otero County Commissioner Couy Griffin, the founder of Cowboys for Trump, takes in the view from his ranch in Tularosa, N.M., May 12, 2021. Griffin who helped found the group Cowboys for Trump is headed to trial in Washington next week on a charge related to the violent insurrection at the U.S. Capitol. And he plans to show up for court on horseback in a defiant show of support to the former president. (AP Photo/Morgan Lee, File)

SANTA FE, N.M. (AP) — A lawsuit claiming that New Mexico county commissioner and Cowboys for Trump cofounder Couy Griffin engaged in “viewpoint" discrimination could be headed to the U.S. Supreme Court in a test-case for free speech rights on social media platforms.

Swanson, a Marine veteran, says he was blocked in a discriminatory fashion after criticizing Griffin about the upkeep of a courthouse and urging Griffin to not mix politics and religion. Swanson’s attorney on Monday confirmed the petition to the Supreme Court, which has not said if it will take the case.

The 10th U.S. Circuit Court of Appeals in Denver in February sided with Griffin in the dispute over his social media account and whether it functioned as a public forum concerning county affairs, with implied guarantees to public access and free speech.

Advocacy groups including the ACLU assert that First Amendment rights should apply to social media accounts when a public officials use accounts as an extensions of their office.

Griffin has said that he used his Facebook page to express personal opinions as just one member of a three-member county commission.

The dispute emerged in 2019 — long before Griffin, an elected commissioner in southern New Mexico’s Otero County — was suspended indefinitely from social media accounts, including Facebook, following his arrest in connection with the Jan. 6, 2021, insurrection on the U.S. Capitol.

Griffin was convicted of illegally entering restricted U.S. Capitol grounds, where he appeared on an outdoor terrace and tried to lead the crowd in prayer without entering the building.

He was acquitted of engaging in disorderly conduct during the riot that disrupted Congress from certifying Joe Biden’s presidential election victory.

Griffin is not running for reelection in November.