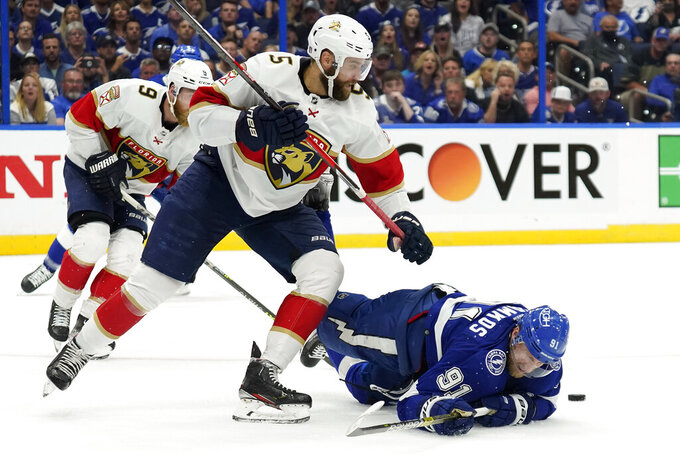 The reigning Conn Symthe Trophy winner delivered another stellar playoff performance for the two-time defending Stanley Cup champions on Monday night, stopping 49 shots to beat the Florida Panthers 2-0 and finish a four-game sweep that sends them to the Eastern Conference final for the sixth time in eight years.

Pat Maroon snapped a scoreless tie, batting Zach Bogosian’s shot down behind Panthers goaltender Sergei Bobrovsky before the puck trickled into the net a little over six minutes into the third period. Ondrej Palat added an empty-net goal with 22 seconds left.

Vasilevskiy won his sixth straight game, a streak that began with the Lightning facing a 3-2 series deficit in the opening round. It was his sixth shutout in his last seven series-clinching wins.

The 27-year-old goaltender nicknamed “Big Cat” posted his 57th career postseason victory, moving into a tie with Tuukka Rask for 17th on the all-time list. He's allowed one or fewer goals in 28 of 87 playoff starts.

When Vasilevskiy began this postseason by yielding three or more goals in Tampa Bay's first six games against the Maple Leafs, coach Jon Cooper said the Lightning's confidence in him never wavered.

“I’m not so sure there’s much more I can say about him. It’s funny how the playoffs are five games into the Toronto series and you’re asking all these questions about what’s wrong with Vasilevsky,” Cooper said.

The high-scoring Panthers, who averaged a NHL-best 4.11 goals per game while compiling the league’s best record during the regular season, were shut out for the first time all season. The Presidents' Trophy winners finished with three goals in four games and wound up being outscored 13-3 in the series.

“They’re really good. I mean, they’re Stanley Cup champions for a reason, and their evolution of how they were once a high-flying kind of offensive team and they found their recipe how to win and they stick with it,” Florida interim coach Andrew Brunette said.

“Obviously, we aspire to be them, and this was another learning experience for us,” Brunette added. “We need to be better.”

The Panthers were eliminated from the playoffs for the second year by their in-state rivals. The Lightning ousted them in the first round in 2021.

“It’s a tough pill to swallow. Getting swept is tough,” Florida's Aaron Ekblad said. “It hurts. It stings. There’s no doubt about it.”

The Lightning joined the New York Islanders and Montreal Canadiens as the only franchises to win at least 10 consecutive playoff series. Their bid to become the first team in 40 years to capture three straight Stanley Cup titles will continue in the East final against either the Carolina Hurricanes or New York Rangers.

The defending champs persevered Monday night despite having goals by Alex Killorn and Nikita Kucherov waved off within a 48-second span of the second period — the first after Florida coach Andrew Brunette challenged and a lengthy replay review determined Palat lifted the puck out of play along the boards before Mikhail Sergachev fired a shot that Killorn tipped past Bobrovsky.

Less than a minute later, Tampa Bay appeared to take the lead again only to have replay confirm Anthony Cirelli won a faceoff in the left circle with a hand pass that Kucherov rifled through Bobrovsky.

“When you hit a little adversity like that, you've just got to stick with it,” Maroon said.

The Panthers became the first Presidents' Trophy winners to be swept by a defending Stanley Cup champion in the playoffs since Edmonton breezed past Calgary on its way to another title in 1988.

Vasilevskiy, who entered Monday night having given up one goal in each of his previous four games, has allowed one goal total in his last seven series-clinching wins.

“It’s pretty cool to play with a player that I think will go down as one of the best goalies that’s ever played the game,” Killorn said. “That’s how you kind of gauge players is how they perform in big-time games, and he’s been nothing but tremendous in his game.”

NOTES: Tampa Bay is the third franchise to win at least 10 consecutive playoffs series. Montreal has done it twice (13 from 1976-80 and 10 from 1956-60). The Islanders — the last team to win at least three straight Stanley Cups — won a record 19 straight series from 1980-84. .... The Panthers outshot the Lightning 17-3 in the first period and 34-15 through the second. ... Florida C Joe Thornton played for the first time this postseason. It was the 42-year-old, six-time All-Star’s 187th career playoff game — second-most among active NHL players. ... C Brayden Point (lower body) remained sidelined for the Lightning. He hasn’t played since being injured during the Lightning’s opening-round Game 7 victory over Toronto.