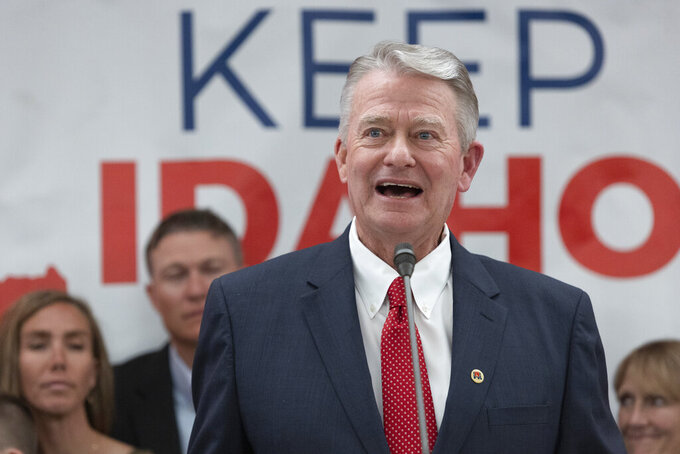 The $38.5 million dip below expectations is still a tiny fraction of the state’s $6 billion budget. But it's noteworthy for a state that in recent years has more often seen monthly revenue greatly exceed projections, spurred by a combination of fast population growth and three influxes of federal COVID-19 rescue money that has heated up the state’s economy.

The August revenue projections had been revised upward in the early part of that month by the Division of Financial Management. The actual revenue numbers released Tuesday by the Legislative Services Office ended up slightly below those higher projections, but are still above what lawmakers worked with when they set the state’s budget during the legislative session earlier this year.

Division of Financial Management Administrator Alex Adams, Republican Gov. Brad Little's budget chief, said there has been economic volatility but some key indicators show the state heading in the right direction. Among those is a long-term trend of increased revenue.

“In general, we feel good about where we're at,” he said. “We'll keep evaluating and keep making those conservative good government budget decisions that Gov. Little is known for and why we got a triple-A credit rating.”

Fitch, a leading international credit ratings agency, announced in November that it upgraded Idaho to the best credit rating a state can achieve. Additionally, Idaho's unemployment rate has for months been back at pre-pandemic levels, currently at 2.6%.

Overall, the state remains in sound financial shape with revenue that is $20 million ahead of projections this fiscal year, which started in July. The state also has $600 million left over from last year and has a projected budget surplus this year of about $1 billion.

But elected officials are concerned about economic headwinds, primarily high inflation that Little cited in calling a special session of the Legislature earlier this month.

During that one-day session, lawmakers passed a $500 million income tax rebate as well as an ongoing individual and corporate income tax cut of more than $150 million by creating a 5.8% flat tax. Lawmakers also set aside $410 million for education.

Idaho's big revenue months are January, when sales taxes from the Christmas shopping season start showing up, as well as April, when income taxes are due, and June, when travel season kicks in and revenues jump, bolstered in part by tourist money and the state's 6% sales taxes.