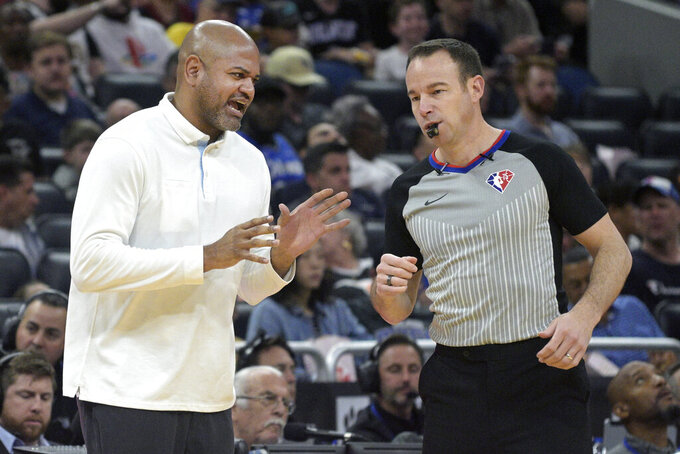 ORLANDO, Fla. (AP) — The Cleveland Cavaliers gave up 120 points to one of the NBA's most offensively challenged teams Tuesday night and took a loss that locked them into the Eastern Conference play-in tournament.

Mo Bamba had 20 points and 12 rebounds, Ignas Brazdeikis scored 20 off the bench and the Orlando Magic beat the Cavaliers 120-115 to stop a six-game losing streak.

“It was a game that obviously had a lot of implications and we just got out-competed,” said Kevin Love, who had 17 points and 13 rebounds for Cleveland. “We definitely need a better effort than we had tonight. We let their record, and who they have out, dictate how we played.”

Moritz Wagner scored 10 of his 15 points in the fourth quarter for the Magic, who shot 50.5% from the field after coming into the game ranked 28th in the NBA in shooting (43.2%).

“There is no overlooking in this league,” said Cavaliers coach J.B. Bickerstaff. “Tonight, time and time again, they outworked us. Give them credit, but it’s disappointing. We didn’t get the job done. We didn't show the fight that we needed to show."

Darius Garland had 27 points and 10 assists, and Lauri Markkanen added 25 points for the injury-riddled Cavaliers, who have dropped eight of 10 and can no longer move up to sixth place in the East. Cleveland is trying to cling to seventh, the top spot in the play-in tournament, with two regular-season games remaining — against Brooklyn and Milwaukee.

“There’s 82 games in the season, and it’s going to happen,” Bickerstaff said. “We just picked the wrong time for it to happen.”

Markkanen, who had 17 points before halftime, scored the final five of the first half to leave the Cavaliers with a 61-59 lead at the break.

Markelle Fultz, who finished with 16 points and six assists in his first start of the season, rallied the Magic in the third quarter.

“My goal was to try to get us off to the best start. We actually didn’t start off that good, but we made a run back into it,” Fultz said. “It’s a game of runs, and we did a good job of sticking with it tonight. As the game went on we got a little better at both ends.”

Wagner scored seven straight points early in the fourth, starting with a midcourt steal and dunk and ending with a 3-pointer to put Orlando up 103-95 with 7:17 remaining.

Garland led a furious late comeback bid and Markkanen could have tied it with a 3-pointer in the final minute, but he missed.

“That was not us,” Markkanen said. “We can't wait until the fourth quarter to try to make a comeback. A very disappointing loss offensively and defensively.”

Bamba hit all five of his 3-point shots in the first 10 minutes to help Orlando quickly erase Cleveland's 14-3 game-opening burst, the Cavaliers' biggest lead of the game.

Cavaliers: C Evan Mobley missed his fifth straight game with a sprained ankle. He will practice Thursday and be re-evaluated. ... All-Star C Jarrett Allen missed his 16th game with a broken finger. ... Garland has scored 22 or more points in 14 of his last 16 games. ... Bickerstaff was fined $15,000 on Monday by the NBA for criticizing officials after Sunday’s game.