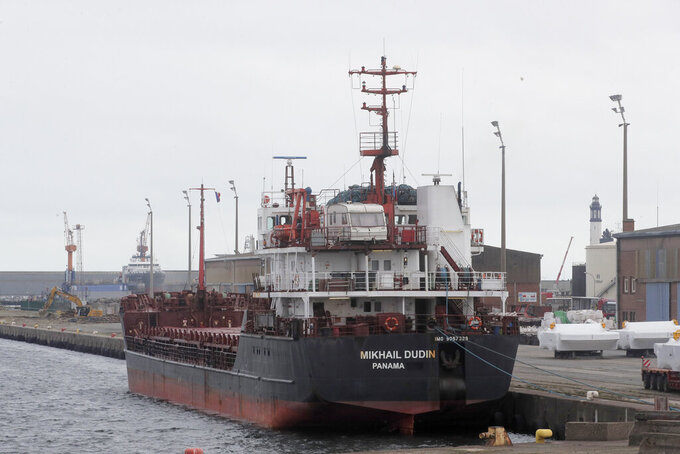 Michel Spingler, ASSOCIATED PRESS
The Russian ship Mikhail Dudin docks at the port of Dunkirk, northern France, Tuesday, Sept.13, 2022. The German government said Monday Sept.12, 2022 that it can't stop a shipment of Russian uranium destined for French nuclear plants from being processed at a site in Germany because atomic fuel isn't covered by European Union sanctions on Russia. Environmentalists have called on Germany and the Netherlands to block a shipment of uranium aboard the Russian ship Mikhail Dudin from being transported to a processing plant in Lingen, close to the German-Dutch border. (AP Photo/Michel Spingler)

PARIS (AP) — While the European Union has agreed to curtail its use of Russian oil and gas, its member nations continue to import and export nuclear fuel that is not under EU sanctions — to the chagrin of the Ukrainian government and environmental activists.

A cargo ship carrying uranium that departed from the French port of Dunkirk traveled across the North Sea on Thursday, heading toward the Russian Baltic port of Ust-Luga. It was the third time in just over a month that the Panama-flagged Mikhail Dudin ship docked in Dunkirk to transport uranium from or to Russia.

Environmental group Greenpeace France denounced the ongoing shipments and called for stopping all trade in nuclear fuel, which it said was “financing the war in Ukraine, extending (Europe's) energy dependence and delaying the transition to renewable energy.”

“France ensures strict compliance by economic players with all the European sanctions adopted against Russia. Civil nuclear power is not affected by these sanctions,” the French Foreign Affairs Ministry told the Associated Press.

The ministry that EU nations “did not consider this to be a relevant area for ending Russian aggression against Ukraine.”

Ukraine, meanwhile, is pushing for European sanctions in that area. The Ukrainian president’s economic adviser, Oleg Ustenko, said Wednesday that “in terms of uranium, we think it’s extremely important to impose sanctions, not only on Russian oil."

“Oil, gas, uranium and coal, all this should be banned. Because they are using this money in order to finance this war,” Ustenko said.

According to Greenpeace France, reprocessed uranium meant to be transported to Russia were loaded onto the Mikhail Dudin on Wednesday. Pauline Boyer, an energy campaigner at Greenpeace France, said the ship's repeated trips between Russia and France show “the extent to which the French nuclear industry is trapped in its dependence on Russia.”

French authorities have repeatedly said the country does not depend on Russia to supply the nuclear power plants that provide 67% of its electricity — more than any other nation.

EDF, which manages all of France’s nuclear power plants, said in a statement its uranium supplies were “guaranteed by long-term contracts for periods of up to 20 years, with a policy of diversification in terms of sources and suppliers.”

France imports most of its uranium from Niger, Australia and Kazakhstan.

“The value of trade in nuclear fuel exported from Russia is small compared to that of gas and oil exports,” the French foreign ministry said, suggesting that imposing sanctions in that area would not have much effect on Moscow.

The ministry said France and the EU aim “in the long term” to be independent from all Russian energy sources, including nuclear fuel.

Greenpeace France said a shipment of Russian uranium that an Associated Press reporter saw getting unloaded in Dunkirk earlier this month was transported by trucks to a plant in Lingen, Germany.

The Lingen plant is operated by Framatome, which is majority-owned by French utility giant EDF. It is supplying nuclear fuel to plants in France, Belgium, Switzerland, the Netherlands, Britain, Spain, Sweden and Finland.

Faced with activists’ protests, the German government took a critical view toward the uranium shipment but said it couldn’t stop the fuel from being processed because it isn’t covered by the EU's war-related sanctions on Russia.

At the end of last month, enriched uranium unloaded from the Mikhail Dudin in Dunkirk was destined for the Rhone valley in southern France, which is home to major sites of the French civil nuclear industry, according to Greenpeace France.

The French nuclear sector has a series of contracts with Russian state-controlled energy giant Rosatom, including some to import enriched uranium destined for European nuclear power plants and to export reprocessed uranium to Russia. Rosatom is one of the world’s biggest actors in the nuclear energy market.

Multinational company Orano, headquartered in France, has a contract with Rosatom to buy reprocessed uranium to convert it into nuclear fuel at its Seversk plant, in Siberia, and ultimately use it in reactors to produce energy.

AP Writer Samuel Petrequin in Brussels contributed to the story.