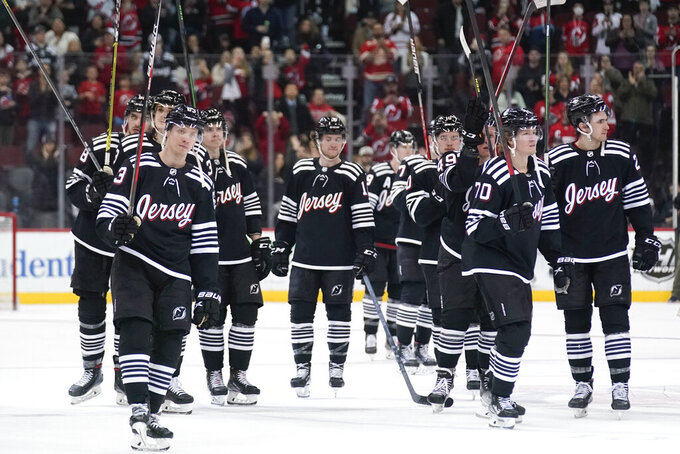 General manager Tom Fitzgerald hired Lindy Ruff two years ago to coach the New Jersey Devils because of his success developing young players in the NHL.

While there is no doubt that Jack Hughes, Nico Hischier, Jesper Bratt and Yegor Sharangovich have taken their games to new heights, Fitzgerald has told Ruff that won't be good enough in the future.

The Devils aren't cutting it as a team. They posted a 27-46-9 record this past season, missing the playoffs for the fourth straight year and for the ninth time in the past decade. Their 63 points were 28th in the 32-team league.

“There’s a lot of negatives that went on this year,” Fitzgerald said Thursday in his end-of-season wrapup. “But when you look at the snapshot of the positives and what our team accomplished individually, that excites me and should excite our fan base."

Fitzgerald said the team has shown it can score, and its defensive play picked up with the signing of free agent Dougie Hamilton, the trade for Ryan Graves, and the development of Jonas Siegenthaler and Damon Severson.

The problems were in goal with Mackenzie Blackwood and Jonathan Bernier injured most of the year. Hughes was limited to 49 games because of injuries and there was an overall lack of consistency.

The guys who paid the price for that were assistant coaches Alain Nasreddine and Mark Recchi. They were not retained.

No doubt Ruff will be on a short leash next season.

Fitzgerland, who was hired on an interim basis in January 2020 to replace Ray Shero and given the full-time job six months later, has to answer to owners Josh Harris and David Blitzer. He needs results and wants the team to do things his way. He said that means the team meets his standards and expectations when it comes to the day-to-day planning, practices and games. He wants a smart, physical, detail-oriented team.

Fitzgerald said the hiring of the new assistants will be a collaborative effort between him and Ruff.

Fitzgerald isn't giving up on the 25-year-old Blackwood despite two sub-par seasons marked by injuries. He played in 25 games this season because of a heel injury.

Blackwood came back and played in the final week of the season and Fitzgerald said the goaltender is confident and looking forward to next season. It is uncertain whether Bernier (hip surgery) will be ready for the start of 2022-23, said Fitzgerald, who plans to bring in an experienced goaltender to challenge both players.

Fitzgerald said Hamilton (nine goals, 21 assists in 62 games) got off to a great start but his game slipped after his jaw was broken. He expects Hamilton to return to form next season and show why the Devils gave him a seven-year, $63 million contract.

Fitzgerald heads into the offseason needing to make some decisions. Defenseman P.K. Subban, one of the leaders of the Newark, New Jersey organization, is a free agent along with veteran Jimmy Vesey, who was versatile and played on all four lines.

Bratt, who had a career year with 26 goals and 47 assists, and fellow forward Pavel Zacha are restricted free agents who can go to arbitration.

Fitzgerald said the Devils want Bratt back. He was not as clear with the other three.

The Devils started the season well but fell victim to the injuries.

“We were a hard team to play against,” Fitzgerald said. “Other teams said that, but we couldn’t sustain that for obvious reasons. It’s tough to say would we have been an 88- to 90-point team if we had this or if everybody was healthy. I don’t live in that world, but I really believe in the process. I really believe in these young players. ”