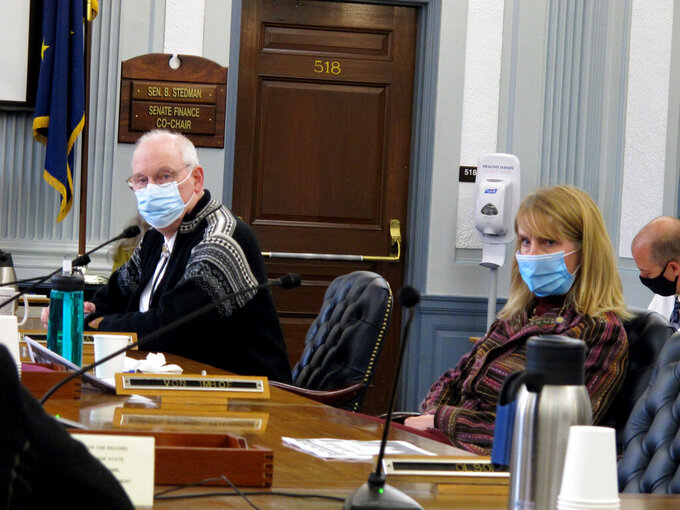 JUNEAU, Alaska (AP) — Alaska lawmakers have yet to agree on a dividend payout to residents this year though legislative leaders say they hope to do so by the end of this special session, which is Tuesday.

“I'd like to see that. I think that’s fair to Alaskans,” House Speaker Louise Stutes said. “We want to make sure that Alaskans can count on something and then we keep moving forward, towards a sustainable resolution on a PFD and a solid fiscal plan.”

PFD refers to permanent fund dividend, the annual check traditionally paid to residents from the state's oil wealth. For years, the dividend was based on a formula. But in recent years, as Alaska has struggled with deficits, the amount has been set by state political leaders.

Gov. Mike Dunleavy and many lawmakers have said they want a long-term solution to the dividend debate, which has consumed considerable legislative attention and time and distracted from other issues.

Legislators have spent most of this year in regular or special legislative sessions, with this year's payout unresolved. A budget proposal earlier this year called for a roughly $1,100 dividend, using in part funds that required three-fourths support in each the House and Senate. Those votes failed, leaving the dividend at what was estimated to be $525. Dunleavy vetoed that. He has advocated for a check around $2,350.

“We're trying to get something that both bodies can support,” Senate Finance Committee Co-chair Bert Stedman said of the Senate and House. The Sitka Republican said Sunday that the target is to do that “by midnight Tuesday.”

Another special session could be possible if those efforts fail.

The Alaska House late last month passed legislation calling for an $1,100 dividend this year. There have been different interpretations as to whether much of the money that would be used for the checks is available without a three-quarter vote.

The debate over this year's check comes against the backdrop of discussions over the future of the dividend program and a fiscal plan for a state that has come to rely on earnings from the oil-wealth permanent fund to also help pay for government. Those discussions are expected to stretch past this special session.

Permanent fund earnings traditionally have been used to pay dividends.

A working group, created earlier this year, was tasked with making fiscal plan recommendations. The group was composed of members from each legislative caucus, representing positions across the political spectrum. In a report last month, the group proposed as part of a solution elements including constitutional certainty for a dividend, new revenues of up to $775 million, budget cuts and spending cap revisions. It said a comprehensive approach should be negotiated and “agreed to as whole,” not taken up piecemeal.

The caucuses were not bound by the recommendations, and there has been resistance to some pieces even as committees have begun hearing bills on related topics, such as taxes.

During a news conference called by Dunleavy to assail actions taken by the federal government affecting resource development, Kara Moriarty, president and CEO of the Alaska Oil and Gas Association, also called out possible oil-tax revisions by the Legislature as problematic.

She said the state should be doing “everything it can... to keep all of our industries stable and competitive.”

Sen. Natasha von Imhof, an Anchorage Republican, during a hearing Thursday on an omnibus tax bill said she thought tax talk was premature until the dividend issue was settled.

There are differing opinions among legislators, too, on what the dividend should be and whether it should be in the state Constitution.

The work group said its members had different ideas on a formula but it recommended the Legislature “work towards” one in which half of what's drawn from the fund annually goes toward dividends as part of a comprehensive solution.

Sen. Mike Shower, a Wasilla Republican who was part of the group as an alternate, said lawmakers face a math problem and a political one. He said he also worries some Alaskans aren't seeing the bigger picture.

“You have people out there that are seeing only their part of it, and they’re in their little echo chamber and their bubble, and we’re not breaking those echo chambers up enough for people to see the whole picture,” he said Sunday, adding later: “Stop, everybody, stop. Stop what you’re doing. Take your blinders off and let’s solve the problem.”

Senate Minority Leader Tom Begich, in a floor speech Friday, asked his colleagues if they had the “will” to move forward on a broader fiscal plan.

Legislators are “elected to lead” and provide guidance to their communities, not “respond to every whim of every single constituent or every political backer but to actually look at what the future needs to entail and then to act on that," the Anchorage Democrat said.

The Senate Finance Committee released a draft plan Sunday that would keep in place a limit on withdrawals from earnings and propose a stair-step approach to dividends that would build toward allowing for a 50/50 split between what goes to dividends and government. But that 50/50 split would only happen if by Dec. 15, 2024, the state Revenue commissioner and Legislative Finance Division director agree that measures expected to generate at least $700 million in new annually recurring revenues had been enacted.

Otherwise, the dividend at the top end would be $1,300, growing with inflation. The committee did not immediately act on the bill.

Other approaches have been proposed, too, including from Dunleavy.

Dunleavy has pushed a constitutional amendment that calls for restructuring the permanent fund, limiting what can be withdrawn from it and evenly splitting withdrawals between dividends and government costs. Constitutional amendments call for two-thirds support in each the House and Senate to advance. Some legislative leaders have said they don't see the support for that proposal at this time.

This story is corrected to remove reference to when proposed stair-step would begin.