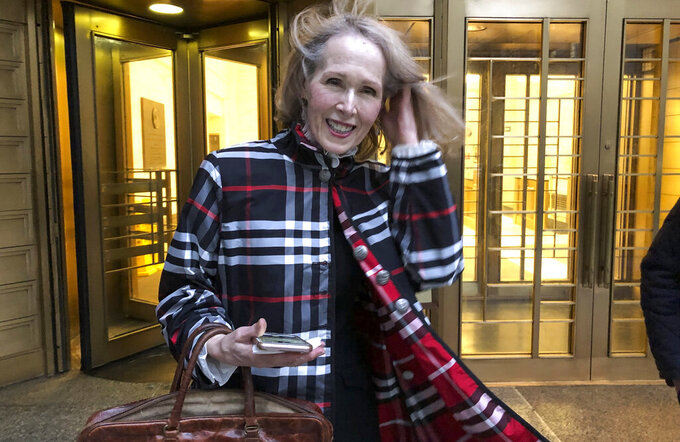 NEW YORK (AP) — An appeals court in Washington D.C. has been asked to help decide whether Donald Trump was doing his job as president when he denied raping a woman and dismissed his accuser as “not my type.”

The columnist, E. Jean Carroll, sued Trump in 2019, claiming the Republican raped her in the mid-1990s inside a dressing room at a Bergdorf Goodman department store in Manhattan, then lied about it and besmirched her character when she decided to tell her story publicly.

Since then, the case has gotten bogged down in a technical legal dispute over whether Trump should have to defend the lawsuit as a private citizen, or whether the U.S. government should step in as the defendant because Trump was performing his duties as president at the time he issued his denials.

Because the alleged attack happened so long ago, Carroll was originally barred for suing over sexual battery, so she sued for defamation, making the suit largely about disparaging comments Trump made about the rape allegation.

In a 2-to-1 decision Tuesday, a panel of judges on the New York based 2nd U.S. Circuit Court of Appeals resolved one part of the fight, holding that Trump was a federal employee. But it asked the D.C. Court of Appeals, the highest court in the District of Columbia, to decide whether Trump’s public statements denying Carroll’s rape claims occurred within the scope of his employment.

If so, he would be entitled to immunity from the lawsuit, the 2nd Circuit judges ruled. And while the U.S. government can be sued over some wrongdoing by its employees, it is immune from defamation lawsuits, which would mean Carroll's suit would fail.

The 2nd Circuit said courts have been inconsistent in previous rulings and that the D.C. Court of Appeals might be in the best position to answer the question of whether Trump's statements were job-related.

Alina Habba, a lawyer for Trump, treated the 2nd Circuit ruling as a complete victory, saying it “will protect the ability of all future Presidents to effectively govern without hindrance.”

She added: “We are confident that the D.C. Court of Appeals will find that our client was acting within the scope of his employment when properly repudiating Ms. Carroll’s allegations.”

In a majority opinion written by Circuit Judge Guido Calabresi, two members of the 2nd Circuit's three-judge panel said they were not expressing any view on whether Trump’s public statements were defamatory or whether a sexual assault had occurred.

In a dissent, though, Circuit Judge Denny Chin said the other members of the panel were wrong in concluding Trump was an employee of the government according to a law known as the Westfall Act. He said the law was intended to protect low-level, rank-and-file government employees rather than the president.

And he said he would also conclude that at least some of the statements Trump made about Carroll were not made within the scope of his duties as president. He pointed in particular to Trump’s comment that Carroll was not his type.

“In the context of an accusation of rape, the comment ‘she’s not my type’ surely is not something one would expect the President of the United States to say in the course of his duties,” Chin wrote. “Carroll’s allegations plausibly paint a picture of a man pursuing a personal vendetta against an accuser, not the United States’ ‘chief constitutional officer’ engaging in ‘supervisory and policy responsibilities of utmost discretion and sensitivity.’”

Chin also attacked the government’s position — which began when Trump was president and continued under the administration of President Joe Biden — that a president acts within the scope of his employment whenever he responds to the media and to public critics.

“If that were so, then the mere presence of others would neutralize whatever a President did or said, for no President could be held accountable for damage done in front of a microphone or in an official meeting — whether defaming a citizen, exposing classified national security information, or inciting a riot. This is not, and should not be, the law,” Chin wrote.

Carroll’s lawyer, Roberta Kaplan, responded to a request for comment by citing Chin’s dissent, calling it a “powerful opinion.”

She added: “We are confident that the D.C. Court of Appeals, where this case is now headed on certification, will agree.”

There's a chance the legal fight over whether Trump or the U.S. government should be the defendant in the case could become moot.

Carroll's lawyer recently alerted a Manhattan federal court judge in August that she plans to file a new lawsuit against Trump in November when New York's Adult Survivor's Act take effect. The law offers a one-year “window” during which time adult survivors of sexual attacks would be able to bring civil claims when they otherwise would be barred by time requirements.

That would mean Carroll could sue Trump over the original rape allegation, which happened long before he became president.