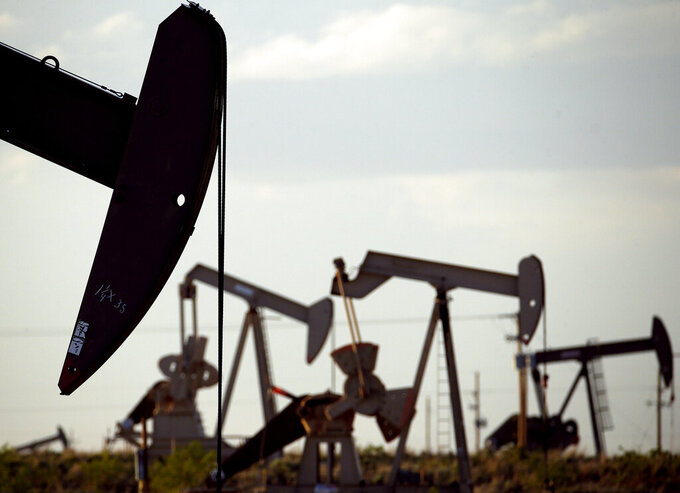 ALBUQUERQUE, N.M. (AP) — New Mexico is now the nation’s second largest oil producing state, and environmental officials say more needs to be done to rein in pollution from the industry.

They are proposing another set of rules as part of Gov. Michelle Lujan Grisham's initiative to address climate change. This time, the state is focusing on the kinds of pollution — volatile organic compounds and nitrogen oxides — that react with sunlight to form harmful levels of ground-level ozone.

A hearing began Monday. Members of the state Environmental Improvement Board over the next two weeks will hear from dozens of experts and see reams of technical data, but it will be months before a final decision is made.

Before calling her first witnesses, an attorney for the New Mexico Environment Department argued that the board has a duty to address rising ozone concentrations rather than wait until the U.S. Environmental Protection Agency forces the state to take action under provisions of the Clean Air Act.

“This rule-making is the first time the department has taken steps to seriously regulate the oil and gas sector and it is taking place in the context of a massive expansion of this industry in New Mexico over the last several years,” said attorney Lara Katz.

New Mexico is home to part of the the Permian Basin — one of the world’s richest oil producing regions. Revenues from development there and in the San Juan Basin in the opposite corner of New Mexico are key to state spending on public education. Lawmakers also have created an endowment for early childhood education programs that is fueled by oil and gas revenues.

The industry generally supports the proposal but wants to ensure that regulators balance the need to reduce pollution with the viability of oil and gas development.

Attorney Eric Hiser, who represents the New Mexico Oil and Gas Association, said the rule is expensive whether you consider industry estimates of more than $3 billion or the lesser $1.5 billion cited by state witnesses. He urged the board to "pay attention to questions where we may be able to keep effective regulation but do so at lower costs to New Mexicans.”

He also suggested that the proposed rules would have only a limited impact on overall ozone levels, noting that significant pollution also comes from the transportation sector.

“It’s not a silver bullet that’s going to solve all of New Mexico’s attainment issues, as much as we in industry wish it would,” Hiser said.

The state expects the rule to lead to reductions in ozone-causing pollution that would equal taking 8 million cars off the road every year. Methane emissions also would be reduced as a result, officials have said.

The rules proposed by the Environment Department are part of a two-pronged approach, which state officials have touted as the most comprehensive effort in the U.S. to tackle pollution blamed for exacerbating climate change. State oil and gas regulators adopted separate rules earlier this year to limit venting and flaring as a way to reduce methane pollution.

The Environment Department has removed all exemptions from an earlier draft of the rule. The proposal includes minimum requirements for operators to calculate their emissions and have them certificated by an engineer and to find and fix leaks on a monthly basis.

If companies violate the rules, they could be hit with notices of violation, orders to comply and possibly civil penalties.

Attorneys for regional and national environmental groups that have intervened in the case told the board the rule is a good first step toward protecting public health and the environment but that more can be done, including requiring emissions data submitted by operators to be made public.