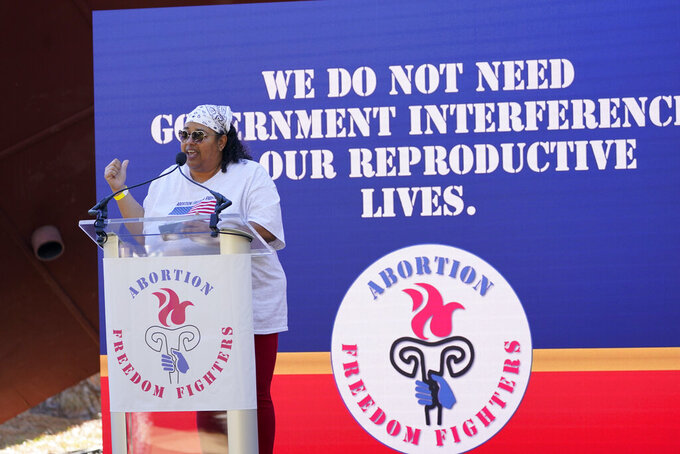 Rogelio V. Solis, ASSOCIATED PRESS
Michelle Colon, co-founder and executive director of SHERO, reminds the audience that the government "need not interfere in the reproductive lives of women," during an abortion rights rally in Smith Park in Jackson, Miss., Wednesday, Dec. 1, 2021. The U.S. Supreme Court on Wednesday heard a Mississippi case that directly challenges the constitutional right to an abortion established nearly 50 years ago. (AP Photo/Rogelio V. Solis)

JACKSON, Miss. (AP) — Republican Gov. Tate Reeves and several other Mississippi politicians make clear that they don't think the government should mandate vaccination against COVID-19. They take a different stance on bodily autonomy when it comes to a woman or girl deciding whether to have an abortion.

In arguments before the U.S. Supreme Court on Dec. 1, the Mississippi attorney general's office defended a 2018 state law that would ban most abortions after 15 weeks. The state solicitor general, Scott Stewart, also tried to persuade justices to overturn the court's 1973 Roe v. Wade decision that legalized abortion throughout the United States and its 1992 ruling in Planned Parenthood v. Casey, which reaffirmed Roe.

Reeves was lieutenant governor when the 15-week ban was pushed into law, and he has said repeatedly that he wants to restrict abortion. When Reeves appeared on “Meet the Press" days before the Supreme Court arguments, the show played a video clip of Reeves saying COVID-19 vaccine mandates were a “power grab” by the federal government.

In the context of government rules that affect people's bodies, host Chuck Todd asked Reeves: “Why should the state of Mississippi tell a woman what they should do with their body? Why shouldn’t they have that individual freedom on their body, particularly in the first 20 weeks?”

Reeves responded: “The far left love to scream, ‘My body, my choice.' And what I would submit to you, Chuck, is they absolutely ignore the fact that in getting an abortion there is an actual killing of an innocent, unborn child that is in that womb.”

The Supreme Court is expected to take several months to rule on the Mississippi case. Six conservative justices indicated they would uphold the Mississippi law. Doing so would undermine Roe and Casey, which allow states to regulate but not ban abortion up until the point of fetal viability, at roughly 24 weeks.

In a detailed ruling in November 2018, Judge Reeves wrote that “this Court concludes that the Mississippi Legislature’s professed interest in ‘women’s health’ is pure gaslighting.” He cited the state’s high infant mortality statistics and noted that Mississippi has not expanded Medicaid, which is an option most states have taken under the 2010 federal health law signed by then-President Barack Obama. Mississippi still has not expanded Medicaid because of opposition from Reeves and other Republican leaders.

“I respect your right to make whatever health care decision, as it pertains to the coronavirus, that you think is best for you in consultation with your health care provider," Gunn said Oct. 28 at the Mississippi Economic Council's Hobnob event. "This is America. One of the greatest rights we have in this country is to make the decisions that we think are best for us in regards to our health care.”

Gipson was a House committee chairman who worked to push the 15-week abortion ban into law, and he filed written arguments asking the Supreme Court to uphold it. During Hobnob, Gipson said federal vaccination mandates are "as un-American as anything I’ve ever seen in my life.”