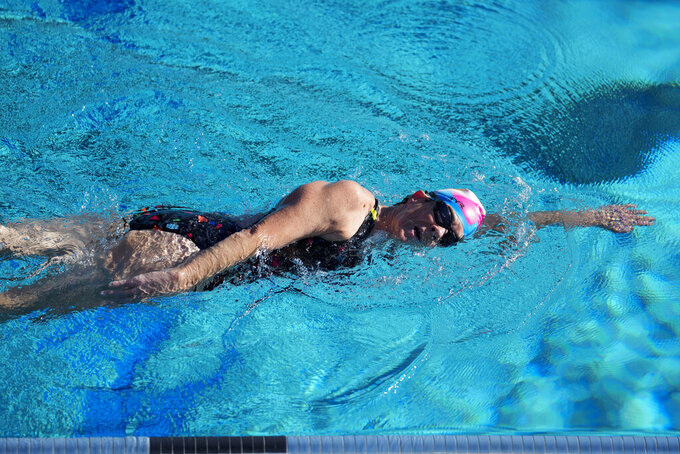 Godofredo A. Vásquez, ASSOCIATED PRESS
Stanford women's basketball head coach Tara VanDerveer swims in the school's Olympic-size pool in Stanford, Calif., Wednesday, Nov. 16, 2022. Regular swimming is one more thing VanDerveer squeezes into her jam-packed days three times a week to keep mentally and physically ready as she begins her 37th season on The Farm and 44th overall as a women's head coach. (AP Photo/Godofredo A. Vásquez)

STANFORD, Calif. (AP) — Shuffling along in her slides and cozy Stanford Basketball parka, Tara VanDerveer offers a reminder of her one rule when it comes to swimming: If she's going to get wet, she absolutely must stay in for at least 45 minutes to make it worthwhile.

The Hall of Fame coach took a two-minute walk from Maples Pavilion to the pool on Wednesday afternoon ahead of a late tip-off against Cal Poly and accomplished her goal.

Regular swimming is one more thing she squeezes into her jam-packed days three times a week to keep mentally and physically ready as she begins her 37th season on The Farm and 44th overall as a women's head coach.

“Short course or long course?” VanDerveer asks aloud while approaching the 25-yard pool before quickly deciding it would be a good day for the 50-meter pool with no other swimmers in sight at either spot.

Cap and goggles on, and in she goes.

At 69 and the winningest women's basketball coach with 1,162 career victories, VanDerveer mixes up her activities to stay in top condition. She is a smooth swimmer who keeps a steady pace, freestyle the whole way. No breaks until she's done.

She has swum alongside Olympians Katie Ledecky and Simone Manuel, marveling at how they seem to effortlessly and efficiently reach the other end and turn as she chugs along through the water.

Sometimes VanDerveer spends a lap thinking about each player on her roster. Other times, she might think about a month of the year or reflect on former seasons.

“I kind of zen a little bit,” she said. “I just get thinking about something totally different.”

VanDerveer's decorated career has transcended coaching eras. First, she stood tall against the late Pat Summitt. Then UConn's Geno Auriemma. Now, it's Dawn Staley of South Carolina (3-0), which visits Maples Pavilion on Sunday as the No. 1 team in the country to face VanDerveer's second-ranked Cardinal (5-0) in a showdown of the past two NCAA champions.

Staley played for VanDerveer on the 1996 Olympic team that captured gold in Atlanta. When South Carolina visited Stanford in 2010 early on in Staley's South Carolina coaching career, she brought VanDerveer to the visiting locker room to share some encouragement and wisdom.

“When you're living your truth and your passion, it's timeless. It's always in because it's organic. It's not a fad, it's not a passing moment," Staley said of VanDerveer. “It's beautiful the way she approaches life, the way she approaches the game, and that's why she's able to relate — I don't even think she relates to people, people have a way of relating to her.”

VanDerveer has adapted over the decades. She still has fun. She always credited Summitt for helping her get where she is today.

Eileen Roche, the program's longtime basketball operations executive, calls in advance before road trips to set up swim times for her and VanDerveer so they can get their mile-long workouts done even when out of town.

It used to be VanDerveer sought out a piano to use on the road. Now, she searches for swimming pools.

VanDerveer is an accomplished Peloton cyclist, too. One of her former players, Charmin Smith, now coaches at California in nearby Berkeley and keeps tabs on VanDerveer's rides, expecting nothing less than greatness from her former coach in everything she does.

“This isn't fair to Tara but it doesn't even amaze me anymore, it's just what I expect of her,” Smith said. “She's just like excellence when it comes to this game and our sport, women's basketball in particular. She's just really good at what she does. I just expect it now, I'm not surprised.”

VanDerveer's path might be different today had she stuck with her early interest in playing the flute. She gave it up as a teen because of the stomach-churning anxiety she experienced before each lesson with her highly regarded teacher.

VanDerveer turned instead to the piano.

“I was always excited to go to my piano lessons even if I hadn’t practiced,” VanDerveer said. “So I think for me I try to be more like my piano teacher and less like my flute teacher. But neither of those teachers had games on the line or felt any pressure that I had to perform at some level.”

After her swim this week, it's time to hustle back to the practice floor for shootaround. She thanks the water polo coaches on her way out, and then scurries back across to the arena locker room for a quick shower before hitting the court with hair not yet completely dry.

“I love my shower, I think I've earned my shower,” she said.

And VanDerveer remains in awe of Stanford and all its splendor, fortunate each day to work in such a special place.

“Nothing to lose, you know,” she said before exiting the pool, “You had a good day already. It's great. Isn't this just beautiful? All right, gotta get ready for the game.”