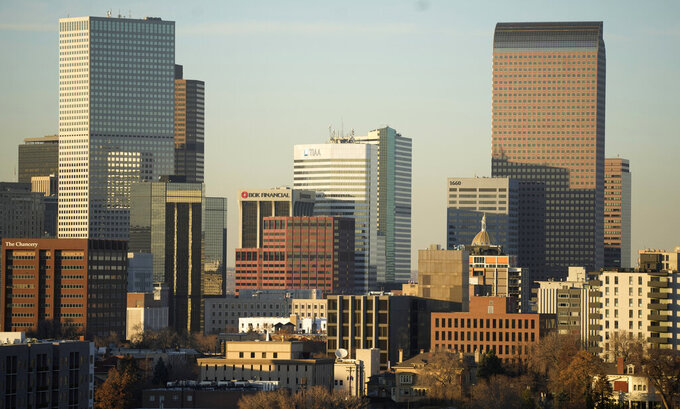 David Zalubowski, ASSOCIATED PRESS
FILE - The Denver skyline is illuminated as the sun sets behind the Rocky Mountains on Dec. 3, 2021. The U.S. Environmental Agency is proposing to downgrade Colorado's biggest population center from a "serious" to a "severe" violator of federal ozone standards, a move that would force the state and industry to adopt tougher local rules to improve air quality. (AP Photo/David Zalubowski, File)

DENVER (AP) — The U.S. Environmental Agency is proposing to downgrade Colorado’s biggest population center from a “serious” to a “severe” violator of federal ozone standards, a move that would force the state and industry to adopt tougher local rules to improve air quality.

After several smoggy summers that have often shrouded the view of the Rockies from Denver, Colorado officials had expected the recommendation, slated to be published in the Federal Record on Wednesday.

Gov. Jared Polis and fellow Democrats who control the Legislature are pursuing legislation costing hundreds of millions of dollars to reduce transit pollution, promote an electrified transportation grid, increase air and ground monitoring of polluters in the oil, gas and other industries and subsidize free public transportation during the worst summer pollution months.

The greater metropolitan areas of New York City, Chicago, Dallas-Fort Worth and Houston also are set to be classified as “severe” ozone violators under the EPA proposal, Colorado Public News reported Tuesday. The proposals are subject to 60-day public comment periods, including virtual public hearings, before possibly going into effect.

Ground-level ozone, the main component of smog, forms when pollutants emitted by vehicles, power plants and a wide range of industries chemically react in sunlight. It can aggravate asthma and contribute to early deaths from respiratory disease. Increasingly warm temperatures and smoke from wildfires play their role — both of which experts attribute to climate change that has delivered an epic drought gripping the U.S. West.

In Colorado, the EPA move would affect a nine-county area of metropolitan Denver that stretches from Fort Collins in the north to the southern Denver suburb of Castle Rock. The region repeatedly has missed deadlines to reduce ozone levels below a 2008 EPA standard of 75 parts per billion.

The Denver urban corridor has struggled to meet EPA ozone standards for nearly two decades. In 2019, the EPA downgraded the region’s air quality rating from “moderate” to “serious.” Polis welcomed the move, having said it was time to stop “sugar-coating” Colorado’s air problems.

A downgrade would be more costly for numerous additional businesses that would have to seek and comply with tougher state air pollution permits, especially in the transportation and oil and gas sectors. Gasoline stations may be required to sell cleaner-burning but pricier fuel during the summer of 2024, when the EPA recommendation could take effect.

State regulators could require more than 450 new business emissions sources to get permits, and the Colorado Air Pollution Control Division, a part of the state public health department, is seeking $43 million this legislative session to add dozens of workers and buy monitoring equipment.

Complicating the local problem is that one-half to two-thirds of the region’s ozone comes from outside Colorado, according to Michael Silverstein, executive director of the Denver-based Regional Air Quality Council, the region’s air quality planning agency.

“We can reduce our share of those emissions and hopefully rely on our upwind partners to reduce ozone across the country and around the world,” Silverstein said.